The Aviationist’s photographer Tony Lovelock was there to take the images of the aircraft landing in the UK.

The U.S. planes were bound to Israel, to take part to Juniper Stallion 13, a bilateral aerial exercise held between the U.S. and Israeli air forces, lasting approximately two weeks.

Juniper Stallion 13 is an annual a combined, bilateral F-15/F-16 air-to-air training event designed to improve the interoperability and cooperation between the U.S. and Israeli Air Force.

Fort those who may believe the exercise has something to do with the situation in Syria, the official statement by the U.S. European Command claims that: “JS 13 is an annual training event which has been in planning for more than a year.”

Last month, the U.S. Air Force released some nice images showing the air power build up near the Syrian border depicting a Jordanian F-16 Fighting Falcon leading another Jordanian F-16, as well as an American F-16 from the 120th Fighter Squadron, Colorado Air National Guard, and two Marine F-18s from VMFA-115 over a training base in Northern Jordan.

By the way, note the kit bag strapped down behind the seat of 539. 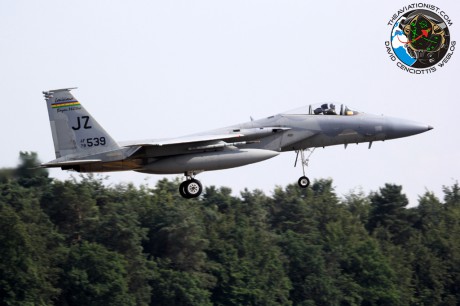 Short but interesting clip. A couple of days ago we have commented an image that had appeared on Facebook showing a U.S. Air Force F-35A forming up with the Thunderbirds for a photo session in […]