Taken few hours ago at Decimomannu airbase, in Sardinia, by Gian Luca Onnis, the following picture shows a German Air Force F-4 Phantom with the Jadgdeschwader (JG) 71 “Richthofen”, taking off into a rainbow, shortly after a thunderstorm.

The JG-71, from Wittmund, is Germany’s last F-4 operational squadron and the sortie on Oct. 1 afternoon was the last one on the Phantom for the squadron’s commander: the change of command ceremony will take place at “Deci” on Oct. 2. 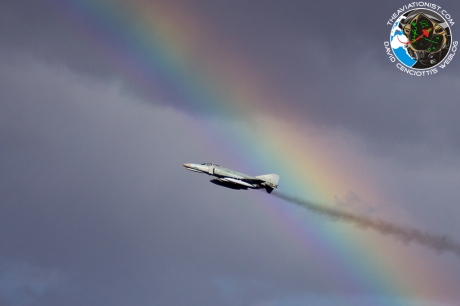 About David Cenciotti 4031 Articles
David Cenciotti is a freelance journalist based in Rome, Italy. He is the Founder and Editor of “The Aviationist”, one of the world’s most famous and read military aviation blogs. Since 1996, he has written for major worldwide magazines, including Air Forces Monthly, Combat Aircraft, and many others, covering aviation, defense, war, industry, intelligence, crime and cyberwar. He has reported from the U.S., Europe, Australia and Syria, and flown several combat planes with different air forces. He is a former 2nd Lt. of the Italian Air Force, a private pilot and a graduate in Computer Engineering. He has written four books.
Website