Both have been flying research missions since the early ’60s.

They are based at Ellington Field, Texas, but they are often deployed to different bases, both within CONUS and abroad and, alongside scientific projects (hurricanes, radiation impact on clouds, and so on) they often undertake some “special operations”.

Few months ago, I discovered that WB-57 had been deployed to Afghanistan after conducting test flights at Nellis Air Force Base.

Indeed, the aircraft is currently on a BACN deployment at Kandahar Airfield until Dec. 5, 2012. It will be back in Houston for maintenance until Feb. 2013, and then leave agian on Feb. 28, 2013, on another deployment outside the U.S. (most probably in Afghanistan) until Sept. 30, 2013.

On the other hand NASA 928, 926’s sister plane, is currently deployed to MCAS Miramar for what the NASA’s program website calls “”BACN JUON 2012 I&T” which sounds like integration and testing for the BACN (Battlefield Airborne Communications Node) under a JUON (Joint Urgent Operational Need) contract signed in 2012.

BACN payloads are believed to include sensors and antennas used by the WB-57 to relay comms between command and control centers and ground troops located within valleys and ridges in the Afghanistan mountains.

According to the NASA website, NASA 928 will operate from Miramar until Sept. 15, 2012, then it will be back in Houston until leaving for a CONUS deployment from Oct. 4 to Dec. 14, 2012. Since the aircraft is not scheduled to depart for Afghanistan soon, it may be testing payloads to be carried by other planes.

The question is: why is it testing the new sensors at MCAS Miramar?

Noteworthy, a reader of The Aviationist has sent us the pictures you can find in this post, showing the WB-57 NASA 928 with a civilian color scheme slightly different from the previous one. 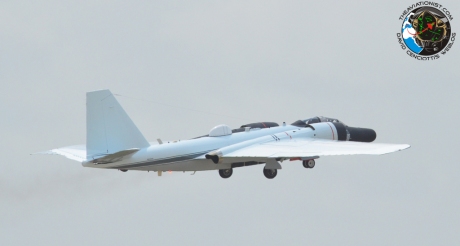 By the way, you can track NASA 928 on FlightAware and, as I’m writing this post, it is flying a weird racetrack around Miramar at FL500…

About David Cenciotti 4142 Articles
David Cenciotti is a freelance journalist based in Rome, Italy. He is the Founder and Editor of “The Aviationist”, one of the world’s most famous and read military aviation blogs. Since 1996, he has written for major worldwide magazines, including Air Forces Monthly, Combat Aircraft, and many others, covering aviation, defense, war, industry, intelligence, crime and cyberwar. He has reported from the U.S., Europe, Australia and Syria, and flown several combat planes with different air forces. He is a former 2nd Lt. of the Italian Air Force, a private pilot and a graduate in Computer Engineering. He has written four books.
Website

Being the base of the Red Flag, Nellis Air Force Base, near Las Vegas, is used to host U.S. and foreign combat planes quite frequently. However, the Air Force One is a quite rare sight […]