Do you remember the French Tiger helicopter that landed on a beach near Tripoli to pick up a Free Libya flag from a young girl?

Something similar (although much less dangerous) has happened in the UK recently.

The Sun has published some interesting pictures showing a RAF rescue Sea King helicopter landing on a beach during a training sortie to give a crew member the opportunity to buy ice creams. 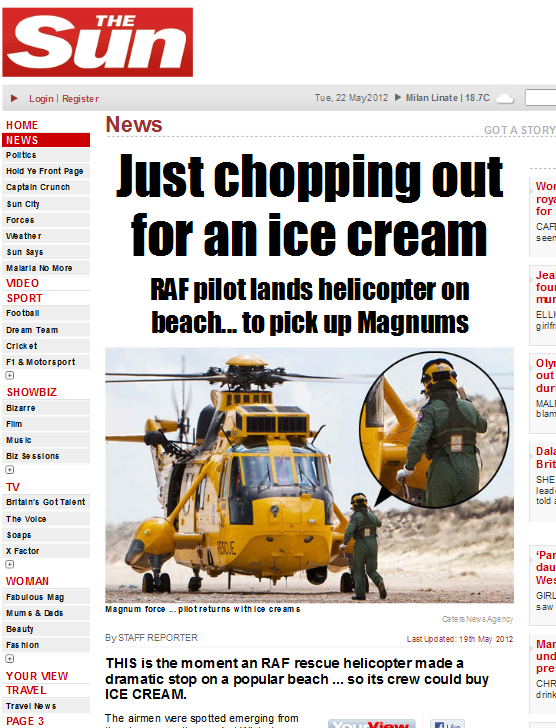 The episode took place on the sand at Winterton-on-Sea, Norfolk, to the east of Norwich and, if you wondered, they bought three Magnum Classics and one white chocolate Magnum.

SAR (Search And Rescue) choppers are often required to land on beaches during real operations. That’s why they train emergency landing on sand.

In this case, rear crew (not pilots as some media reported) took the chance to disembark to obtain refreshment: although it’s not a standard practice, they did not breach any regulation.

After providing some exclusive images of the Special Colour AB205, Paolo Maglio sent me another contribution from the 7° Reggimento Vega Change of Command’s ceremony, held in Rimini on Sept. 08. The new Cdr, Col. […]

French Navy (Marine Nationale) has recently admitted that the Conficker worm struck some important systems preventing operative units to download their flight plans as databases were infected. Even if warnings about the risk of being […]