Just a couple of days after North Korea displayed its military hardware in Pyongyang, during which North Korean leader Kim Jong Un delivered his first public televised speech since the failed rocket launch, a new military parade took place in one of world’s most hot places: Iran.

According to the Mehr News Agency, thousands goose-stepping soldiers took part to the parade in which some military vehicles and equipment were displayed, including the new generation of the Zolfiqar tank, the Samsam tank, the Borragh personnel carrier, the Naze’at missile launcher, the Misaq 2 missile launcher, the Badr tank transporter, and advanced radar and missile systems.

Several planes attended the “show” as well, including IRIAF F-14s, and Su-24s (performing aerial refueling), even if, to be honest, nothing comparable to the 70 F-15Es launched yesterday by the U.S. Air Force from Seymour Johnson AFB.

If I were to choose between the IRIAF current fighters and the 70 F-15Es of the 4th FW, most probably I’d pick the Strike Eagles. 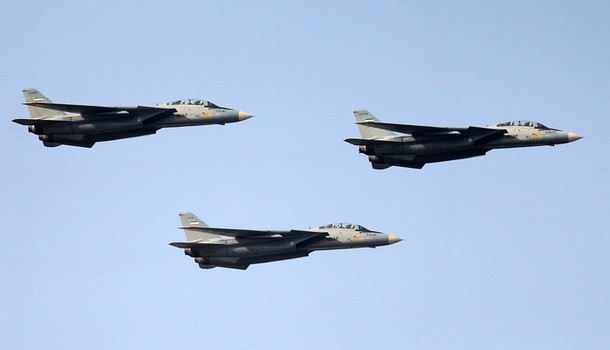 “Security in the Persian Gulf will be promoted with the participation of regional countries, and the interference of foreigners will bring nothing but insecurity,” he said.

A message to Israel, U.S. and some regional allies, in anticipation of a possible (imminent?) attack on Tehran’s nuclear program.

2011 has been an annus horribilis for information security, and aviation has not been an exception to this rule: not only in 2011 the corporate networks of several aviation and aerospace industries have been targeted […]

An Israeli unmanned aerial vehicle has just crashed in the vicinity of Baghdad Airport. According to the FARS News Agency, an Israeli Hermes drone crashed near Baghdad airport on Aug. 27. It is still not […]