Uploaded on Mar. 24, 2012, these videos show the made-in-Iran drone, known as “Pahpad”, taking off and operating from Hamah airbase in the city of Hama, in the west part of Syria, north of Damascus.

Hamah seems to be one of the most active regime’s airbases: a Syrian Air Il-76 offloading some “goods” and several Mig-21 and helos were recently filmed there.

Here’s the video of the departure

The drone flying at low level

Here below some screen dumps which confirm that the drone used by the Syrian regime over Hama, is the same spotted in Homs. 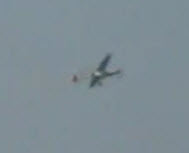 This is the first image of a North Korean militarized, camouflaged Il-76 cargo plane

It looks like some of North Korea‘s Il-76 cargo planes have been militarized and given an interesting camouflaged color scheme. The image showing the Il-76TD the military camo (the first and, probably, only so far), […]

A Sukhoi Su-27. At Creech Air Force Base, Nevada.

Update, Jan. 11 13.00 GMT Look at the following image Lazygranch.com has found on Imageshack.us. Taken by Ethan Miller/Getty Images on Apr. 16, 2009, the photograph depicts an MQ-1B Predator at Creech Air Force Base, […]

Shardan 2009: an Italian UAV flies from Amendola to Decimomannu

On Aug. 3, 2009, a General Atomics Predator A Unmanned Air Vehicle, belonging to the 28° Gruppo of the 32° Stormo of the Aeronautica Militare (Italian Air Force, ItAF), was satellite-guided from its homebase in […]