As has been widely reported it is no secret that China is trying to acquire stealth technology for use in their indigenous aircraft program. It was only last year that photo’s and video of the J-20 started to appear on the internet. It was clear that  China had made advances into the dark art of stealth technology, although first radar evading tech dates back to about 40 years ago. What was interesting was that the J-20 did not posses the angular lines of the Nighthawk but the more rounded curves of the B-2 or Raptor, it was clear a lot of work had been done behind closed doors for the Chinese scientists.

Another area that Chinese designers have made advances in is that of UAV’s (unmanned aerial vehicles) or UAS (unmanned aerial systems). Rumours started in 2007 when, during the Paris Air show, China displayed the ‘Dark Sword’ concept.

The Dark Sword clearly had a very low RCS (Radar Cross Section) and showed the way Chinese designers were going in their work. It has appeared several times since then, indicating that this might not just be a concept but could be something that becomes reality in the future.

At the end of 2011 photos started emerging from China of a new Stealth UCAV/UAV dubbed the “Wind Blade” that features a blended wing design with long slim wings with “Sharklets” and an engine intake at the front and above the wing-like body. The overall design would lean towards a high altitude surveillance platform and  going by reports it was designed by students from the Shenyang University which happens to be connected to one of China’s largest aircraft producers. Although the aircraft in the photo is a scale model it’s not clear how old the photo is, so it could be conceivable that there is now a full-scale version. 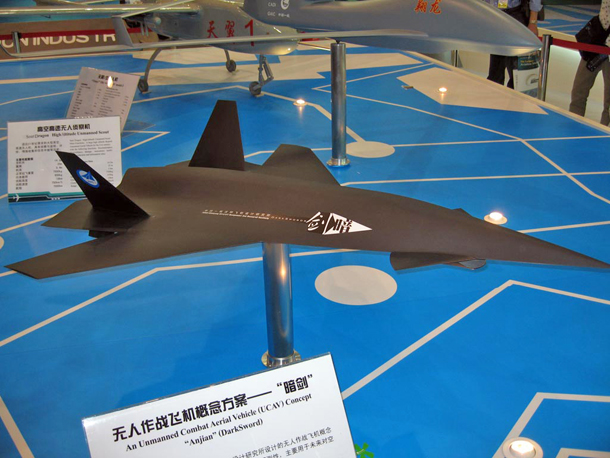 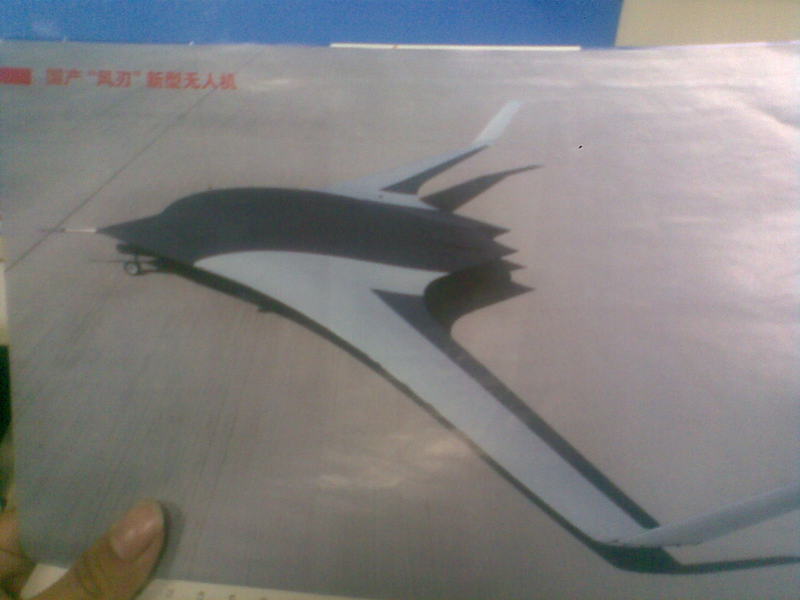 China does have several non stealthy UAVs too.

There is the SOAR Dragon which looks very similar to the Global Hawk although it has swept wings and the tail plane joins with the main wing and from the photo’s below appears to have  radar absorbing paint. What is interesting in these photo’s is that the aircraft is in an advanced state of completion and looks to be being painted.

There are videos of a hybrid Predator – Global Hawk look-alike doing fast taxis down an unknown runway. The drone seems to be in an advanced state of testing meaning this could now be in a flyable position.

Analysts are divided as to where Chinese scientists are with UAV development. Based on the designs that are being displayed, the designers could have mastered stealthy shapes and the complexities of controlling the UAV. There are even reports that the Chinese are testing small-scale UAV’s for automated carrier landings.

Where most analysts agree is that China does not have the infrastructure to have a UAV reach outside of Chinese airspace and even within Chinese borders the signals are unreliable.

Maybe some of the radio/satellite link equipment, as well as  internal memories, circuitry, lenses,  and sensors contained in the RQ-170 Sentinel captured by Iran could be somehow helpful cause they can be evaluated, tested and copied. And, maybe, improved.

China is still a fair few years away from having a true global UAV reach which will require a lot of space systems investment to be able to achieve this. However there is one thing for sure, it will happen at some point in the future.

Iranian UAV that infiltrated the Israeli airspace is shot down by an AH-64 Apache. Then, Israeli Air Force jets launch retaliatory air strikes in Syria.  An F-16I is hit and crashes in northern Israel. Two […]

EUROCONTROL Versus the Drones: The Death of Another UAV Program

European news outlets reported last week that the German Euro Hawk Unmanned Air Vehicle (UAV) program will be terminated due to the prohibitive cost of modifying the platform to conform to collision avoidance requirements.  If […]