With the ItAF formally accepting into service the first two KC-767A tankers (that were delivered on Dec. 29, 2010 and Mar. 10, 2011), it went almost unnoticed the news that the air force contributes to the BONAS (BOmb factory detection by Networks of Advanced Sensors), a Collaborative Project financed by the European Commission that started on Apr. 1, 2011 and will last for 3 years. BONAS has the aim to design, develop and test a new network made of wireless sensors capabable of increasing citizen protection and homeland security against terrorist attacks, and in particular against the threat posed by IED devices. What are IED?

”Any device that is fabricated in an improvised manner, incorporating explosives or destructive, lethal, noxious, pyrotechnic, or incendiary chemicals, designed to destroy, disfigure, distract or harass” (NATO STANAG AAP6-6+Interagency Intelligence Committee on Terrorism – From Enhancing the security of explosives – Report of the explosive security experts task force. Brussels, 28 June 2007).

The concept behind BONAS is to build up a sensor network that will help to geo-locate the vicinity of a “bomb factory” by detecting traces of chemicals used in IED production. The different sensors, deployed in sensitive locations and camouflaged, will focus on detection of particulates, gases and other products that can be bought without specific authorizations (as ammonium nitrate, black pepper, hydrogen peroxide, and others) used for homemade explosive devices in the air and waters. Detection of “bomb factories” is paramount to prevent terrorist activities and BONAS intends to intervene as earlier as possible in the first stages of IED assembly, that give more chances of success, since they usually take considerably more time as compared to the following phases of transportation to the target location and deployment. Hence, during the early stages of IED preparation of a terrorist attack, investigations can be conducted for a longer period of time and with greater accuracy.

BONAS aims also to investigate the potential deployment of sensor aboard a flying platform that would increase the network detection capabilities. Obviously, data collected by the entire network will be correlated by an expert system management system, in order to improve its effectiveness and reduce the false alarm rates.
A total of 12 partners participate in this project based in 9 different European Member States. Among them, some leading research groups (ENEA, QUB, CSEM, ONE, UCBL, UNIL, KCL) together with industrial organizations (CREO, LDI, SAB, TEK, EADS) and some other “expert users” as main European and Israeli police corps, and the Aeronautica Militare (ItAF). 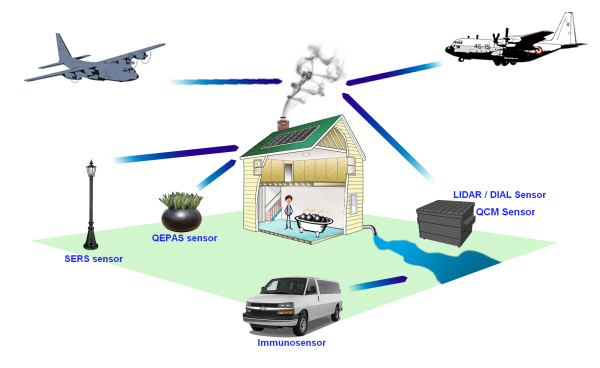 Above one is an original BONAS infographic I slightly modified with two cliparts (aerial platforms).

BONAS will develop QEPAS (Quartz Enhanced Photoacoustic Spectroscopy) sensors; SERS (surface-enhanced Raman scattering) sensors; QCM (Quartz Crystal Microbalance) sensors, Immunosensor and Lidar (Light Detection And Ranging) /Dial (Differential Absorption LIDAR) system. As I wrote a few months ago in my article “The Italian Air Force launches LIDAR (Light Detection And Ranging) on board C-27J to check volcanic ashes” ItAF has already equipped with a LIDAR (Light Detection And Ranging) sensor one of its C-27J “Spartan” to control of the amount of ash in the atmosphere as a result of volcanic activity; most probably, the same sensor and aircraft will be involved in the BONAS testing campaign to develop an aerial anti-IED platform.

Although usual, the “joint venture” in this field by research groups, industry and military could bring to important results.