An interesting article published yesterday by the Associated Press and commented by Wired/Danger Room, provided some interesting details about the Osama Bin Laden raid. Indeed, anonymous government sources have told the story to the AP even if information they disclosed, raise more questions…
Anyway, first of all, I can’t help but notice that my possible explaination of Operation Neptune’s Spear (OBL raid’s name), published on May 6, was not disproved by facts disclosed so far!

Five aircraft flew from Jalalabad, Afghanistan, with three school-bus-size Chinook helicopters landing in a deserted area roughly two-thirds of the way to bin Laden’s compound in the Pakistani city of Abbottabad, two of the officials explained.

Good. The departure aerodrome is Jalalabad (my guess was right)  and there were also 3 Chinooks. Let’s have a look to what I wrote on May 6:

“I think there are two possibilities: both [helicopters involved in the raid] were Silent/Stealth/Upgraded/Modified/etc. Black Hawks; or 2 were Stealth Black Hawks and Stealth Chinooks. I don’t believe that “normal” MH-47s were involved as some media speculated (for the above mentioned considerations on the stealthiness of the formation) so, I’m almost sure only new Black Hawks were used. However, since we now know that a Black Helicopter exists, I can’t completely rule out the possibility that, along with a Stealth Black Hawk, somewhere there’s also some sort of modified Stealth Chinook flying“.

Since the officials confirmed that 3 Chinooks were involved and given that a mixed formation of stealth and non-stealth helos would have rendered the entire formation clearly visible on radars and audible from distance, I believe that there must be also a modified MH-47 flying with the 160 SOAR. Unlike the Black Hawk, we have no photographic evidences of it, but I think that their existence is somehow confirmed by the fact that the officers admitted their presence on the scene. Furthermore, it is quite obvious that the sources are trying to deceive the public opinion when they say to the AP journalist that:

You can’t reduce noise by modifying only the tail rotor. Even the main rotor had to be fixed. And what about the anti-radar finish to enhance stealthiness? In my opinion, as explained in the last post on this subject, the Stealth Black Hawk is a highly modified version of the UH-60 helicopter.

I’ve asked once again to Ugo Crisponi to prepare a sketch of how a Stealth Chinook might look like by applying more or less the same modification used for the Stealth Black Hawk. 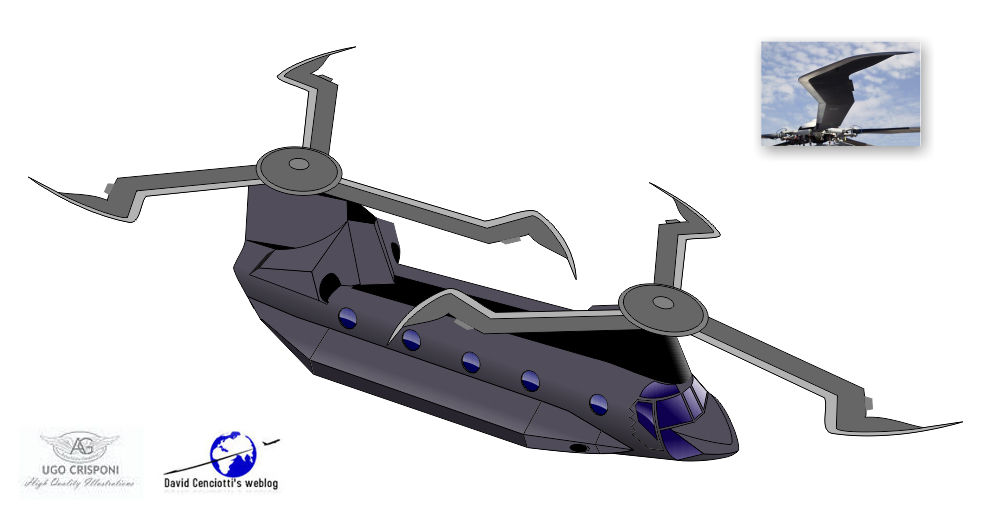 The same AP article then gives some details about the Stealth’s crash landing:

The added weight of the stealth technology meant cargo was calculated to the ounce, with weather factored in. The night of the mission, it was hotter than expected. […]

The plan unraveled as the first helicopter tried to hover over the compound. The Black Hawk skittered around uncontrollably in the heat-thinned air, forcing the pilot to land. As he did, the tail and rotor got caught on one of the compound’s 12-foot walls.

On this topic I had a chat with a friend of mine, who’s a former helicopter combat pilot with some Tour of Duty in Afghanistan. He’s quite skeptical about the “weather factor”: Abbottabad is “only” 4.000ft AMSL and at night, the temperature is always (well) below 30° C. Even a heavy modified helicopter should not have problem hovering over the compound. Hence, there could have been three kind of “root cause” for the crash landing:

1) flying a very risky mission at night with Night Vision Goggles, the pilots could have lost situational awareness and impacted the compound’s wall while approaching it for landing. This would explain why the tail is cut as images show
2) the helicopter, flying at lower altitude than the other Stealth Black Hawk, was hit by wake turbulence generated by the other chopper’s rotor. “It’s a very dangerous situation” my friend told me “since the turbulence hits both the main and tail rotor, giving almost no chances to react”
3) there was a “recirculation condition”: exacerbated by proximity to walls or cliffs or trees, this occurs when the air passes down through the rotor disc, hits the ground, moves out horizontally, hits the wall, goes up and then gets sucked down again through the rotor. You then have air that is already moving down coming through the disc and this leads to a greater power requirement which can then make the effect worse. This accident may not have been helped by the modifications to the tail rotor to make it stealthy that also reduced its efficiency and need for more power. It may not have been helped by pilot’s under pressure, coming in low and fast, possibly with obscured vision behind the first aircraft throwing up dust/sand.

The new Z-19 does not have a cool name, but it does have some very interesting features. The use of the word ‘Stealth’ is probably a little too strong a term for this new helicopter […]

A passenger has caught on video a direct lightning strike on a Delta Boeing 737 at Atlanta airport. The video below is extremely interesting. Shot at Atlanta airport during a thunderstorm by Jack Perkins, a […]