We went to Meiringen to see the Swiss “Legacy” Hornets involved in the WEF 2018 air defense.

From Jan. 22 to 27, Swiss Air Force F/A-18C/D Hornet jets contributed to the security of the WEF international conference at Davos, Switzerland.

The aircraft operated out of Meiringen (and Payerne too), flying CAPs (Combat Air Patrols) that saw the aircraft carrying two live AIM-9X Sidewinders at the wingtips and either two live AIM-120 AMRAAM (Advanced Medium Range Air to Air Missiles) or one AIM-120 and the ATFLIR (Advanced Targeting Forward Looking Infra Red) pod, particularly useful to perform long-range visual IDs. All the Hornets had the “STBY 121.5” marking on their 1,200 lt centerline external fuel tank: a message to any intercepted aircraft to switch their radio to the international VHF emergency frequency 121.5 MHz to get instructions from the interceptor and the air defense radar.

At any given time, each CAP station involved six Hornets: two aircraft flying the assigned racetrack, two heading to the CAP racetrack to relieve the first pair and another two returning to base at the end of their “on station” time. This year, no F-5E/F Tiger took part in the operation… 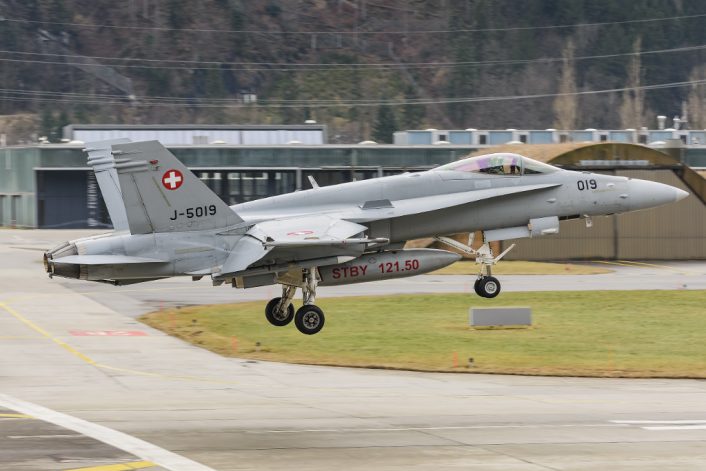 A Swiss AF Hornet about to land at Meiringen airbase. Note the 121.5 text, meant as a message to an intercepted aircraft to switch the radio to the international emergency frequency 121.5 MHz.The Austrian Air Force contributed to the enforcement of the NFZ too, with its Eurofighter Typhoons.

The Aviationist’s Alessandro Fucito went to Meiringen and took the photographs you can find in this post.

This beautiful photo gives you a very different perspective of a typical trap landing. Taken on Oct. 23, this cool photo features an F/A-18C Hornet assigned to the  Sharpshooters of Marine Fighter Attack Training Squadron […]

Two F-16 Fighting Falcon jets, one F-18 Hornet and one Mig-29 Fulcrum were among the most interesting foreign guests of Roma International Air Show 2014. Along with the Frecce Tricolori and Patrouille de France display […]

With a really thin margin of just 9,000 votes, Swiss citizens have approved the multi-billion procurement of new fighter jets to replace both the F-5 and F/A-18 jets in service today. The majority (50.2%) of […]