An unknown episode happened during the first EC-121 Warning Star missions over Gulf of Tonkin.

Even though airborne early warning (AEW) aircraft play an extremely important role today, the first conflict to see an extensive use of AEW platforms was the Vietnam War. Unlike the US Navy, initially the USAF decided not to deploy its early warning aircraft in Southeast Asia (SEA).

In fact only after two Air Force aircraft were downed by North Vietnamese MiG-17s in early April 1965, the USAF realized the need for AEW platforms and deployed five EC-121Ds from the 552nd Airborne Early Warning and Control Wing (AEWCW) to SEA.

These aircraft were grouped into a detachment designated the Big Eye Task Force (BETF) and forward deployed to Tan Son Nhut AFB, outside Saigon, in South Vietnam.

As Don E. Born, an EC-121D pilot deployed with the BETF, recalls in Ian Shaw and Sérgio Santana book Beyond the Horizon The History of AEW&C Aircraft, during his first tour in Vietnam, in 1966, the missions were flown at 50ft (15m!) above the Gulf of Tonkin water.

But there were also several disadvantages: the first one was that even if the plane at this altitude was flown on autopilot because it could hold altitude better than its human pilots, it also required quicker reaction time, in particular in rough air. So one pilot had to remain with both his hands on the control wheel with his forefinger covering the autopilot cut-off switch in case it malfunctioned.

Moreover, the Gulf was full of Navy ships and to avoid them the Warning Star drivers had literally to climb to get over them. A very dangerous way to fly, that became even scary if the Gulf was filled with rain squalls and the pilot had to maintain 50ft of altitude while searching for ships to stay away from.

Typically, the EC-121Ds stayed on station for about five hours, then during the break between the morning bombing sorties and the afternoon ones, they flew to Da Nang to refuel.  As Born remembers “It was after one of these refuelling stops and on our way back up to station, that we nearly landed on one of the 7th Fleet carriers.”

Cruising north up the Gulf at 8,000ft, Born and his aircrew began their descent to station altitude. There were broken clouds that day with build-ups from their altitude down to about 1,500ft.

Born recalls that “As typical, the Navy and the Air Force did not recognise the existence of one another and therefore we normally had no radio contact with Navy ships nor did we even know where they would be on any given day. Well, on this given day as we let down through the clouds and broke out on the bottom, right there in front of us, right there on centreline and glide slope, was the biggest 7th Fleet carrier I had ever seen. We could not have made a better approach if we would have tried intentionally. We were honestly surprised and by the time we regained our composure, we were approaching the threshold.”

The landing signal officer desperately tried to wave them off, as he was really thinking they were trying to land a Constellation on the carrier. But the EC-121D was able to start a go-around and pass over the bridge by several feet. 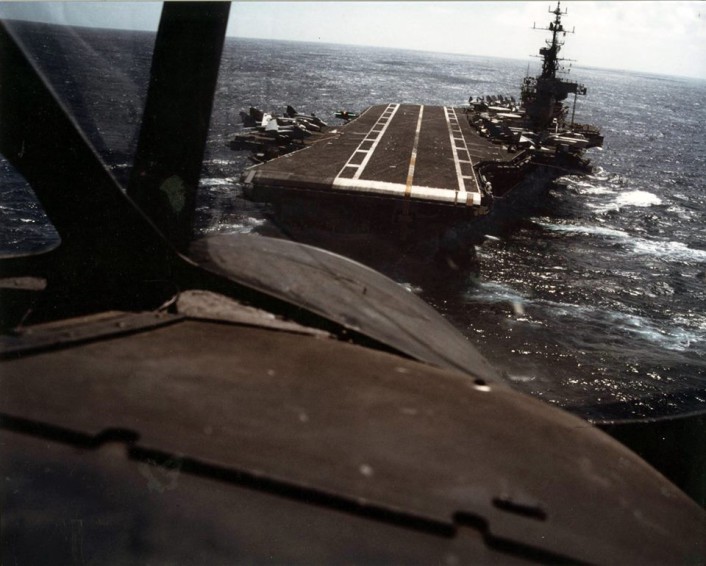 Maybe it was this incident that led the Navy and the Air Force to finally speak with one another: in fact after the “missed EC-121D carrier landing” the US Navy started to send frequencies and positioning reports of its ships during the AEW aircraft crews morning briefings.

The test, the first for Lockheed Martin’s HAWC prototype, happened last month but was kept under wraps to avoid escalating tensions with Russia. DARPA and the U.S. Air Force recently completed a free flight test […]

This interesting infographic details the main ships which form a typical U.S. Navy Carrier Strike Group (CSG). A CSG can fulfill a wide variety of tasks such as projecting power, deterring crisis, promoting regional partnerships and […]