After the Turkish Air Force shot down a Russian Su-24, Moscow has decided to deploy some air defense systems to western Syria.

Following the downing of a Russian Su-24 by the Turkish Air Force on Nov. 24, that caused the death of one pilot (the other one was rescued and brought back to Latakia on the following day) Moscow has decided to put in place some new measures to protect its air group operating in northwestern Syria.

First of all, all the Russian attack planes will be escorted by Su-30SM Flankers during their missions against ground targets in Syria (previously, they operated without air cover).

Second, Moscow has decided to deploy at least one S-400 SAM battery to Latakia, to protect its planes from aerial threats in a range of 250 miles. As explained in a previous post about this air defense system, the S-400 (SA-21 “Growler” according to the NATO designation) is believed to be able to engage all types of aerial targets including VLO (Very-Low Observable) aircraft within the range of about 400 km at an altitude of nearly 19 miles.

Third, Russia has already moved the Moskva guided-missile cruiser off the coast of Latakia. Equipped with early warning systems and outfitted with 8 S-300F Fort anti-air systems with a range of 90 km and ceiling at 25,000 mt. Actually, the cruiser has been operating in the eastern Mediterranean to provide cover to the Russian air forces in Syria since Sept. 30.

The following infographic, prepared by @Naval_Graphics, details most of the weapon and sensor systems aboard the Slava-class cruiser.

Needless to say, with all the air defense systems amassing in the area, the 18 Turkish Air Force F-16s currently on CAP (Combat Air Patrol) station at the Syrian border, while the Russian jets conduct airstrikes in the Turkmen mountains (more or less in the same area where Su-24 pilots ejected yesterday), have something more to be worried about. 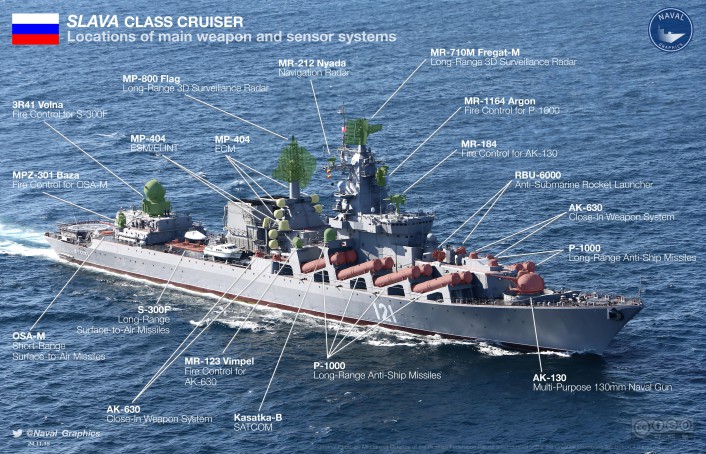 Another interesting kill mark has appeared on a Turkish Air Force F-16. Along with the F-16C that downed a Syrian Mi-17 Hip helicopter back in 2013, another interesting plane can be found at Konya airbase, […]

“Powers Down” is a tribute to Francis Gary Powers, the late U-2 pilot recipient of the Intelligence Star, by rock band One Man Mambo. During the late 50s, with the approval of Pakistani Government, U.S. […]