It has happened again….a Turkish Air Force F-16 was locked on by an “unidentified” Mig-29.

As already reported, on Oct. 3 and 4 October the Turkish airspace was violated by Russian Air Force Su-30SM and Su-24 aircraft in the Hatay region.

During the first incident, the Russian Su-30SM (initially referred to as a Mig-29 by the Turkish military) maintained a radar lock on one or both the F-16s for a full 5 minutes and 40 seconds before the aircraft departed the Turkish airspace. As explained, this was a rather unusual incident: violations occur every now and then, but usually aircraft involved in the interception do not lock on the “target” in order to prevent dangerous situations.

Well it happened again on Oct. 5 and, to make the whole story more mysterious, it looks like the aircraft was identified as a Mig-29 from an unidentified nation/air force.

According to the Turkish General Staff, the Mig-29 locked on at least one of 8 TuAF F-16s performing CAP (Combat Air Patrol) on the border with Syria. What is more, the lock on lasted 4 minutes and 30 seconds.

Considered that the Russian Air Force has not deployed Mig-29s to Syria and assuming that the Turkish Air Force has properly identified the aircraft harassing its F-16s on border patrol, it’s is safe to believe the aircraft involved in the last incident was a Syrian Mig-29 “visiting” the TuAF aircraft in CAP station (as already done in the past).

In both the Oct. 3 and Oct. 5 incidents what is also quite surprising is the length of the lock on: both the Su-30SM and the Mig-29 (provided these were involved in the two close encounters) used their radars to paint the Turkish planes possibly exposing to several intelligence gathering platforms details about their systems. Indeed, if the Mig-29 is a very well-known weapons system, the emissions of the RuAF Su-30SM N011M Bars-R radar can be considered extremely interesting to both the TuAF, Israeli AF and NATO planes with ESM (Electronic Support Measures) capabilities. 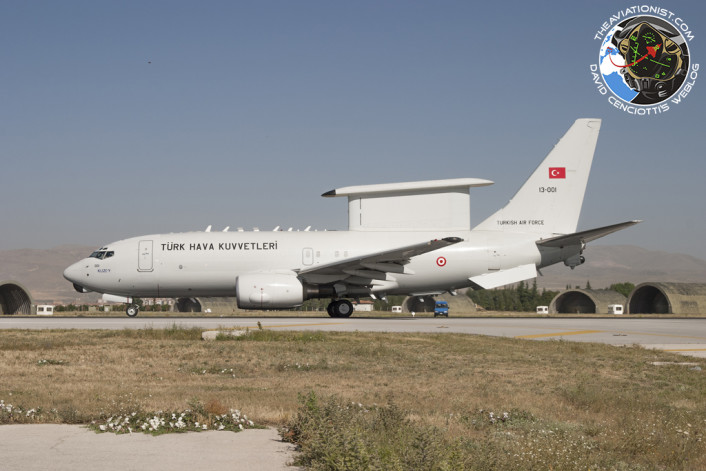 By the way, what is probably a Boeing 737 Peace Eagle airborne early warning & control (AEW&C) aircraft can be spotted every now and then on Flightradar24.com circling at high altitude over southern Turkey, most probably monitoring the movements of the Russian and Syrian planes while collecting some intelligence data as well.

That said, why are the Turkish unable to determine nationality of the Mig? With all the ISR (Intelligence Surveillance Reconnaissance) aircraft focusing on the airspace of northwestern Syria it is at least weird that a positive identification of the aircraft was not achieved. And isn’t it strange that the one later IDed as a RuAF Su-30SM was initially referred to as an “unidentified Mig-29”? Maybe the Russian Su-30SMs (the only aircraft belonging to the Russian contingent that have not been repainted with the Red Star insignia yet) and the Syrian Mig-29s are flying missions along the border with Turkey together making identification more difficult? Unlikely, considering once again the amount of allied AEW (Airborne Early Warning) aircraft in the vicinity.

Anyway, close encounters do not only involve Turkish and Syrian/Russian aircraft.

In the last few days U.S. F-16s from Incirlik came within 20 miles of RuAF Su-34s: reminder that the airspace over Syria is becoming incresingly “hot.”

Many thanks to Guglielmo Guglielmi for discovering the Turkish E-7 on FR24 and to Arda Mevlutoglu for sending us some heads-up about this developing story.

The U.S. Air Force will relocate the 480th Fighter Squadron from Spangdahlem Air Base to Aviano Air Base