Take a virtual sightseeing of the Polish Aviation Museum in Cracow.

The Polish Aviation Museum in Cracow, Poland, features several interesting exhibits and nearly all versions of the MiG-21 Fishbed, including the infamous F.13 version.

The latter was not a pilots’ favourite due to uncomfortable canopy, which opened forwards – pilots were worried that such setting would hinder the ejection.

The “MiG alley” is located in the north-east part of the exhibition, also featuring Fagots in several variants as well as the sole prototype of Bielik, a concept of a lightweight fighter designed in Poland, as well as Iryda trainer. The Aviationist described the Polish indigenous aviation programs last year.

Besides a wide array of Polish Cold War aircraft, the Museum also features many of their western adversaries, namely A-7 Corsair and an Italian Air Force F-104 Starfighter. You may also find a genuine Falklands Harrier in the NATO section.

Another unique plane is the F-105D Thunderchief #59-1882 that was flown by Donald Kutyna, a pilot of Polish orgin who took part in the Vietnam War during the year 1970, operating with 44th Tactical Fighter Squadron of 335 Tactical Fighter Wing from Takhli airbase, in Thailand.

Mjr Kutyna became a four star general, which is the highest rank in the USAF. He helped the Cracow Museum in the process of getting the Thud, named The Polish Glider. 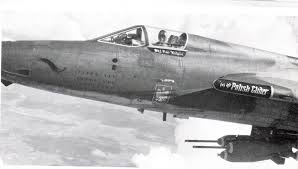 “Polish Glider” nickname was not quite positive at the time of the Vietnam War, since it was more of a joke about a Pole, quite common in the US culture. The adjective Polish, in this case, was not a compliment. Later, due to Kutyna’s excellent flying skills, his plane became known as Superhog.

The plane came to Cracow from the Duxford Imperial War Museum and is still undergoing renovation process.

After the Vietnam War Kutyna was an important official in NASA and took part in Columbia crash investigation. What is more, he was a NORAD commander for some time. He is proud of his Polish ancestry.

The plane is not only well known in Poland: several model kits and die cast models of the F-105D with the Polish Glider markings were produced in the last years.