On Jul. 21, 2013, a Sukhoi Superjet 100, registration 97005, performed a gear up landing at Keflavik airport, where the aircraft has been deployed for training purposes for a few weeks.

The aircraft was performing touch and gos on runway 11/29 before the emergency broke up. The route it followed until the belly landing can be seen on Flightradar24.com. 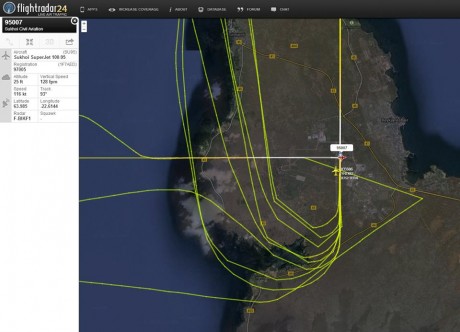 According to some reports, yet to be confirmed, the civil plane was performing ILS CATIII landing practice with simulated engine down, and a wind of 24 knots. 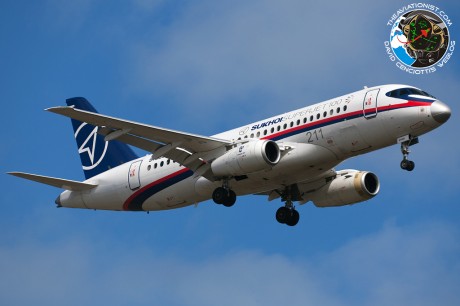 Image credit: Eggert Norðdahl (photo below depicts the aircraft performing touch and gos at Keflavik some days before the incident)

As a result of the belly landing, the SSJ-100 fuselage and one engine were severely damaged. All five crew members escaped safely,  but one that had to be hospitalized (with minor injuries).

Keflavik is the airport used by NATO to perform Iceland Air Policing missions.

Royal Norwegian Air Force F-35s have arrived at Keflavik Air Base, Iceland, for their first mission abroad, under NATO command. On Feb. 19, 2020, four RoNAF F-35A aircraft arrived in Iceland, where they have deployed […]

Pilot Uninjured After Excellent Airmanship during Belly-Landing. The last remaining Sea Vixen aircraft, XP924 G-CVIX “Foxy Lady”, has made an emergency landing without landing gear at Yeovilton, UK, on May 27. The pilot was uninjured […]