On May 9, at 15.30LT, a Russian Sukhoi Superjet 100 (95004), involved in a demo tour in southeast Asia, with 46 people on board has disappeared from radars, approximately 36 nautical miles to the south of Jakarta, during a planned 2,5 hr demonstrative flight from Jakarta Halim Perdanakusuma Airport to Jakarta Halim Perdanakusuma Airport (Indonesia).

[This one uploaded to Foursquare, taken on the ground is one of the last images of the doomed aircraft.]

Obviously, very few details are known at the moment: it looks like the aircraft was cleared to descend from an altitude of 10,000 feet down to 6,000 in area in the vicinity of Mount Slak (7,500 feet) and Mount Gede (9,000 ft), and radar contact was lost as the plane crossed 6,200 feet, moving downwards in a rightward direction.

Obviously, it’s too early to speculate, based on the fact that the crew did not broadcast a mayday call, the main causes of the crash (provided that the incident was a crash and the aircraft did not ditch somewhere) seems to be a CFIT (Controlled Flight Into Terrain), possibly caused by the fog and bad weather conditions in the area.

Indeed, according to the first news agencies the search and rescue operation was hampered by rain, fog and the approaching dusk.

Controlled Flight Into Terrain, that we have discussed on this blog reporting about last year’s Blue Angels near crash during an airshow, is a frequent kind of accident in which an efficient and airworthy plane, underpilot control, is unintentionally flown into the ground, a mountain, water, or an obstacle.

What is weird is that the aircraft disappeared at 6,200 ft while flying under IFR rules and radar control had cleared it to 6,000. Did the crew descend below the radar minima? Or did the ATC clear plane below radar minima?

At the same time, hijacking has not been ruled out, as reported by Russia Today. Along with the Russian crew there were 36 representatives and potential buyers from many different countries.

In fact, the Russian plane arrived in Indonesia on the fourth stopover of its Asia demo tour: after visiting Myanmar, Pakistan and Kazakhstan it was supposed to perform demo flight in Laos and Vietnam, after Indonesia.

The aircraft went missing on May 9 was featured on the Sukhoi Superjet 2012 calendar that you can see below. 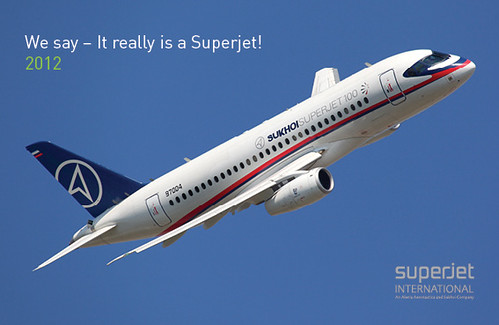 A new video that appears to show the Blue Angels crash in Tennessee has been posted online. A new video uploaded to Youtube yesterday seems to show the deadly crash that killed Capt. Jeff Kuss, […]

On Aug. 17, the Indonesian Air Force staged an interesting flypast over Jakarta to celebrate the 68th anniversary of Indonesia’s independence. Eight Su-27/30 fighter jets belonging to the 11 Sqn (Skadron Udara) and six F-16s […]

U.S. Air Force Credits AGCAS For Saving F-22s And Their Pilots From Crashing For The First Time

The AGCAS system took over to recover the aircraft during three different events in 2016, 2020 and 2021. In a story recently published on Popular Science, the U.S. Air Force Safety Center revealed, for the […]