The Patrouille Suisse is one of the most renowned aerobatic display team in Europe.

Equipped with the F-5E Tiger the team is, together with the Turk Yildizlari (Turkish Stars), that flies the NF-5A/B  Freedom Fighter, the only European display team on supersonic fighter jets.

Despite being regularly invited to attend airshows across the continent, the Patrouille Suisse could be forced to stand down from 2016 as a consequence of budget cuts.

Indeed, beginning in 2016, the ageing F-5 fleet will be progressively retired and replaced by the first Gripen examples and, simply, there will not be many military aircraft in the Swiss Air Force, at least, not enough to equip an aerobatic display team.

In spite of Swiss Minister of Defense claims that the Patrouille Suisse will survive transiting on the F-18 Hornet or the new JAS-39 Gripen (even if the Swiss Parliament has suspended the purchase of the Sweden fighters ordered in 22 examples) the chances that there will be enough resources to dispatch some of these few frontline fighters to the team appear scarce.

Along with the team, even its mascot and honorary member “Flat Eric” will probably be put apart.

Flat Eric is a yellow puppet character from Levi’s commercials that is part of the Patrouille Suisse since 2000. It flies on board aircraft number 2. 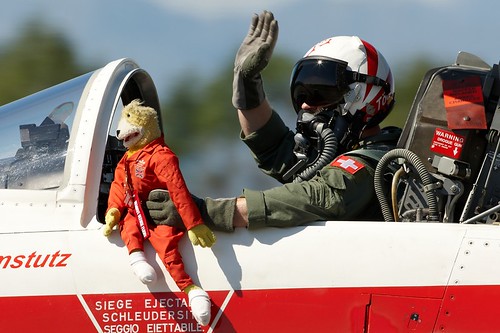 One of Flat Eric’s distinctive characteristic is that it wears a Red Arrows flight suit since 2004, when it was kidnapped by the British aerobatic display team: when it reappeared in the spring of 2005 it was adorned with this special dress.

Since it belongs to the Patrouille Suisse, it follows the team in every air show and deployment; moreover “Flati”, as it is affectionately called by other team members, posses his own Swiss Air force identification card and a log book like all other Swiss pilots.

If the Patrouille Suisse will eventually be disestablished in 3 or 4 years, the airshow circus will not only lose one of its main and best aerobatic display teams, but also one of the most funny mascottes.

David Cenciotti has contributed to this article