The following image is a screenshot from GoogleEarth.

It shows Volkel airbase, the Netherlands, blocked out by Google because it is one of the European sites hosting a U.S. nuclear weapon repository.

Volkel is the base of the 312 and 313 Sqn of the RNlAF (Royal Netherlands Air Force): according to Wikipedia, Dutch F-16AMs can at times be seen carrying BDU-38 dummy bombs, which are used to simulate the B61 nuclear bombs, 22 of those are believed to be stored there (as of 2008).

By the way, Bing Maps shows all the base but the northern part, that is blacked-out. 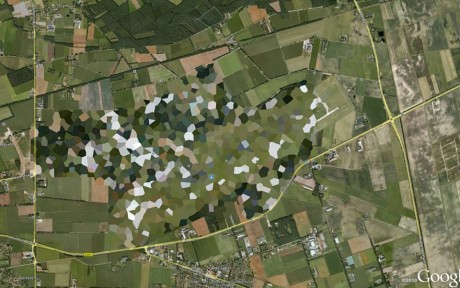 Someone told this author that the reason for blurring the airport is to comply with the request by the Dutch authorities to hide military installations. Still, this would not explain why Leeuwarden airbase is clearly visibile on Google Earth.

On Jun. 14 and 15, Volkel airbase, in the Netherlands, the military installation where 22 U.S. nuclear bombs are housed, hosted the airshow that celebrated the 100th anniversary of the Royal Netherlands Air Force. The […]

U.S. B61 Nukes to get precision guidance systems

Even if UAVs (Unmanned Aerial Vehicles) are often referred to as  U.S. “killing machines”, the effect of a drone attack is almost forgettable if compared to the devastating and widespread effect of nuclear bombs, that […]

Dutch Government Agrees To Sell 12 F-16s To Draken International For Use In Adversary Role In The U.S.

Draken International is about to expand its fleet of fighter jets already used for Combat Air Force/Contracted Air Support (CAF/CAS) program in the U.S with ex-RNlAF F-16s. The Dutch Parliament was informed on June the 29th […]