According to the latest news about the Turkish F-4 shot down by a Syrian Air Defense battery on Jun. 22, the North Atlantic Council will meet on Tuesday Jun. 26, following a request by Turkey under article 4 of NATO’s founding Treaty.

Under article 4 of the Treaty, any ally can request consultation whenever, in the opinion of any of them, their territorial integrity, political independence or security is threatened.

The problem is that Turkey says the unarmed combat plane (173Filo/7Aju) from Erhac, shot down by the Syrian military was engaged without warning.

The aircraft was testing a domestic radar system and was fired at upon leaving Syrian airspace, Turkish Foreign Minister Ahmet Davutoglu said. He also confirmed that the aircraft did enter Syrian airspace before being engaged by the Syrian Anti-Aircraft Artillery, although it had happened by mistake.

As explained on several posts of the Airspace Violations series, aircraft violating a foreign airspace should not be fired upon but warned, intercepted and eventually escorted outside the violated airspace. Anyway, what is still far from being explained is the reason why an (R)F-4 was flying at low level and high-speed just 1 km off the Syrian coast. There are at least three possibilities: navigation error, weather, or intentional violation to probe the enemy air defense readiness.

Although the navigation error can’t never be ruled out a priori, considering the equipment carried by the aircraft, the fact that there are two crew members in a Phantom and, above all, that the plane was flying next to a “danger zone” there’s reason to believe that the two on board were perfectly aware of their position.

What is particularly interesting is the altitude at which the plane was flying when it entered the Syrian airspace. It was extremely low (and it was most probably gunned optically, with no radar lock). As a NATO pilot told me “when you are flying at hi-speed low-altitude you are either performing a rather awkward attempt to penetrate the enemy airspace to use the onboard sensors or to keep below the cloud cover. However, since flying an ISR (Intelligence Surveillance Reconnaissance) mission at low level and less than 12 nautical miles from the coast is almost useless, I think they were probing the Syrian air defense. And I think that they now have a good idea of their readiness status that is, among the others, one of the most interesting things we can learn from the incident.”

Although they most probably knew that the aircraft was a Turkish Air Force plane, the Syrians may have mistaken it for a defecting Syrian Arab Air Force plane. Hence they shot it down before it could reach Turkey, to prevent another embarrassing episode like the one of the Mig-21 that defected to Jordan.

Even if one might believe that buzzing the enemy airspace to test its reaction time or actively disturbing the enemy training activities is something rare, it is not for Turkey or Syria according to what the NATO pilot told to The Aviationist:

“Few years ago, I was flying as a backseater of a Turkish combat plane during a Taceval at Diyarbakir. Our route brought us along the border with Syria and for almost all that leg of our flight our radio communication were (actively) disturbed. Since the jamming of the radio communications was not planned for that kind of mission, it was most probably the effect of a direct action of the Syrian armed forces.”

In the meantime, the fuselage and ejection seats were located (meaning that both pilots have ejected) but they were not recovered yet.

Their names were made public as Captain Gökhan Ertan and Lieutenant Hasan Hüseyin Aksoy. 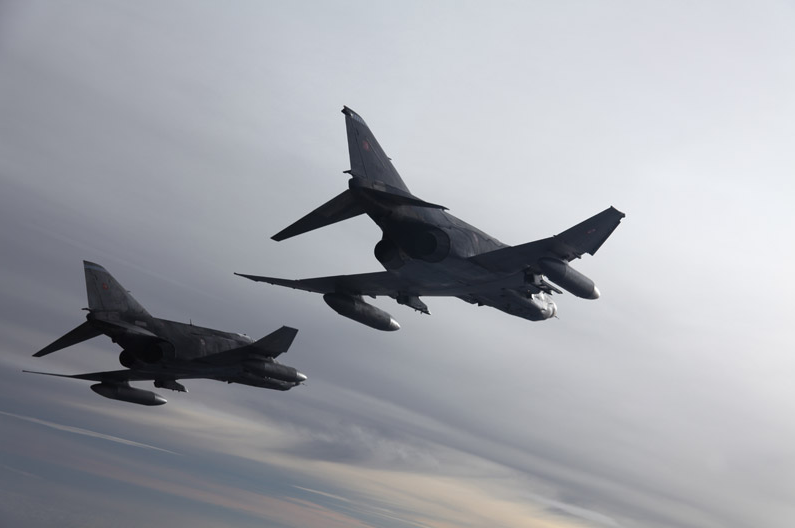 U.S. A-10 reportedly shot at by ISIS militants with Strela MANPADS in Iraq

U.S. A-10 Thunderbolt aircraft face the threat of Man Portable Air Defense Systems in Iraq. According to a report by Iraqi News, American A-10 were shot at with four Strela missiles during the recent air […]

What kind of target did the Israeli Air Force really hit in Syria?

Twice between May 3 and 5, the Israeli Air Force conducted air strikes in Syria using Precision Guided Munitions. The first raid hit a convoy believed to be moving Fateh-110 missiles destined to Hezbollah, whereas […]

Jordanian news website Ammonnews, has reported that “Syria has informed Jordan that it either returns the MiG-21 fighter jet and the pilot, or doesn’t want the “abducted” plane, it would stay in Jordan”. The report […]