In this article you can find some new details that Bjørn Holst Jespersen, a contributor of The Aviationist, has continued to post on his blog, as he keeps collecting and analyzing images and footage from Homs, Hama, Idlib, Damascus and other Syrian towns made available on Social Media.

Hence this is an update to the original Special feature: all the weapons used by the Syrian regime on Homs and following posts about the Syrian uprising published on The Aviationist.

Another weapon has been seen used by the Syrian regime in Homs. It’s a four wheel amphibious armored vehicle with a turret mounted heavy machine gun. The weapon is shown in a video that was linked-to in a tweet from an activist: 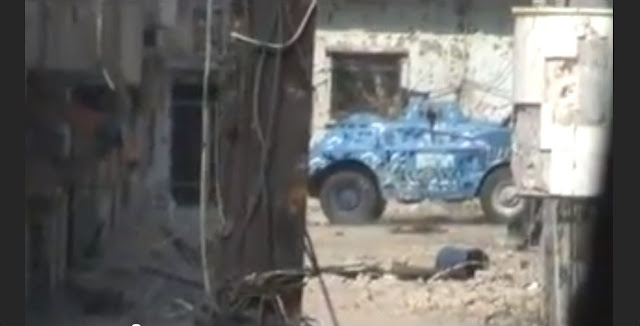 A frame from video on MyAbotarek’s YouTube channel showing the vehicle firing towards the camera.

In the video the vehicle is seen firing at least 15 rounds in the direction of the rather courageous camera man. To identify the vehicle, Bjørn stitched together two frames from the video in the image below:  it’s a Russian (or Soviet) made BRDM-2.

The BRDM-2 is an amphibious armoured patrol car, and its main weapon is a 14.5 mm KPV heavy machine gun.

Apparently, its blue color and the absence of tracks are meant to make it a police vehicle. But even if such vehicles have been used for police purposes in other countries, keeping on the 14.5 mm machine gun makes it a military weapon.

Left: two frames from  video on MyAbotarek’s YouTube channel stitched together. Right: photo of a BRDM-2 in Polish service from Wikipedia.

According to Wikipedia, Syria is estimated to have some 950 of these vehicles, even if it was rarely spotted during the uprising. Bjorn believes that a possible explanation is that the armour of the BRDM-2 is significantly thinner than that of the BMP-1: the thickness of the armour of the hull floor is 2-3 mm and the hull sides 7 mm (also according to Wikipedia) makes it quite vulnerable in urban warfare.

And with an estimated number of BMP-1s for Syria of 2,100 (by 2005) there have been plenty of these until now. Although someone saw the use of the BRDM-2 as an attempt to make it appear as if the regime is complying with the Annan ceasefire agreement (and not as the result of either a decreased level of tension or a lack of better armoured vehicles) the BRDM-2 was used as a police since at least Nov. 10, 2011, as shown in a post on the Military In The Middle East.

Left frame: Under “Police” the Arabic lettering can be translated literally as “maintaining security and order forces”. Images and caption from Military In The Middle East.

Two M-240 mortars believed to be used against Old Homs. The one to the left has its barrel tilted to horizontal position. From a video uploaded on Mar. 28 to 434343aaa’s YouTube channel (via @GRAFIXEL and @ArabSpringFF)

The frames above are from one of the first video documenting presence of the 240 mm mortars. In the video there are two of the towed M-240 mortar model. The footage also shows at least 3 tanks at the start.

The two mortars are placed West of Homs close to the Al-Waer neighbourhood at this position. Please notice as well that all the areas in Homs that have been shelled are within the 9.5 km range of this weapon (see post linked-to at the end of this section for map).

In a video uploaded on Apr. 14 that Bjørn has just recently discovered, the mortar to the left has been covered (image below). The video does not show the one to the right. His guess is that if it was still there it would have been filmed. Possibly it has been moved and covered.

Also in this video the tanks mentioned above have disappeared. Instead a number of tanks can be seen in two buildings close by at this position.

Left frame: something covered in the exact same position as the M-240 in the earlier recording. Frame to the right: tanks hidden/parked in building. Source:  video uploaded on april 14. to 434343aaa’s YouTube channel.

The area where the mortars are placed is part of a military academy and contains more artillery positions. Bjørn has a closer look at the area in this post.

A tank has been extensively used in Syria by the regime: the T-62. The main gun on this model is a 115 mm smooth-bore.

Here below you can find an image depicting a T-62 tank. According to the uploader the tank is positioned on the edge of the Baba Amr neighbourhood, at Homs. 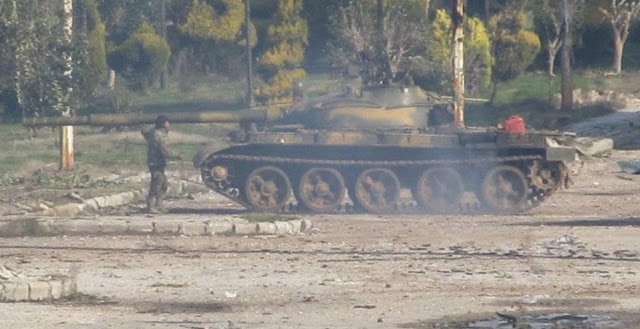 A T-62 tank on the edge of Baba Amr, Homs. The T-62 and the T-55 both have five road wheels, but the T-62 has larger gaps between the last three wheels while the T-55 has a large gap between the first and second. Image source: engahns546‘s Panoramio account.

Browsing Panoramio, Bjørn has found anoter interesting photo showing three tanks located not far from where Baba Amr borders to the Inshaat neighbourhood in Homs. The one to the right is a T-72. The tank in the middle is some kind of road clearing vehicle based on the T-72, and the one to the left should be another T-72.

Three T-72 tanks in Baba Amr, Homs. The number of road wheels is the easiest way to tell the T-72 apart from the T-62 and T-55. Image source: engahns546‘s Panoramio account.

After announcing that the remains of the two missing aircrews were recovered from sea (that proved that the aircraft was not a drone), the Turkish Armed Forces released the first images of the debris of […]

Russian Backfires are using iron bombs from high altitude over Syria. Yesterday we posted an interesting video shot from ground level of a swarm of 19 iron bombs falling from the sky. Here’s footage from […]

We have talked about the U.S. DIRCM systems, now we report about their Russian counterpart that is part of the latest upgrades for the helicopter fleet. Since the beginning of the 2000s, we have observed […]