Predator UAVs have often been the subject of articles published on this site as drones are some of the emerging technologies of the modern battlefield. Recently, the Aeronautica Militare opened the Ground Control Station (GCS) of the Predators currently deployed at Herat, in Afghanistan, to SKY TG24 that had the possibility to interview Maj. Lury Tupini, Commander of the Task Force Astore. Maj. Tupini gave to the reporter Pina Esposito an insight into the GCS, showing footage recorded by the Predator and explaining that crew required any time the UAV (Unmanned Aerial Vehicle) is keeping an area under surveillance is made of 4 military: a pilot, who’s responsible of the flight; a sensor operator, who moves the aircraft cameras and sensors; a mission monitor, who receives requests from “customers” and send them the required images; and a flight engineer, who checks the status of the aircraft by means of telemetry. There’s also a fifth person, an image expert, whose duty is literally “to explain what the aircraft is seeing”.
Low visibility, long persistence on the target and no-risk for the mission crew are those features that make the Predator the ideal asset to provide surveillance of high-lethality areas.

Click on the image below to watch the report. 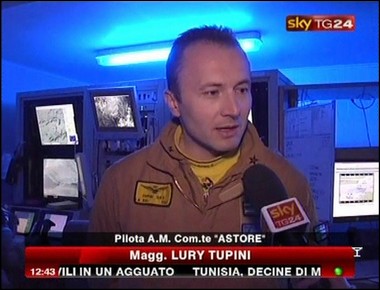 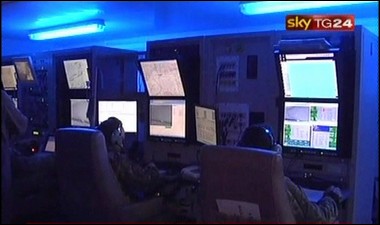 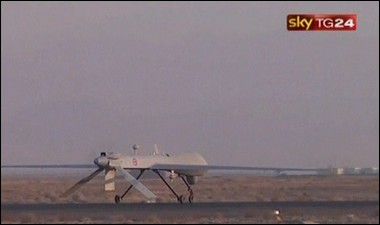 During my recent visit to Pratica di Mare, I noticed that many of the aircraft that attended the static display of the 87th Anniversary of the Aeronautica Militare, were “zapped” with a small gecko (or […]

Even if it may seem to be a standard drone carrying two long range tanks, the Hermes photographed over Gaza in the last days carry an unknown type of pod. A firing pod according to […]