People usually thinks that aircraft are subject to “bird strikes” collisions between airborne animals (usually birds) with flying aircraft. However, until the aircraft is on the ground, taxiing or rolling for take off, it is at risk of collisions with dogs, cats, hare, kangaroos, etc. (hence called “wildlife strikes”) that cross aprons, runways and taxiways with the same possible catastrophic results of a bird strike.
A “near miss” (that is an unplanned event that did not result in injury, or damage although having the potential to do so) wildlife strike involving a rabbit occurred during the recent airshow held in Rivolto to celebrate the 50th Anniversary of the Frecce Tricolori. As the interesting picture below, taken by Giovanni Maduli shows, on Saturday Sept. 11, while the first section of five Alenia Aermacchi MB.339A/PANs of the Pattuglia Acrobatica Nazionale (Italian Aerobatic Team) was taking off for the last display of the day, a hare crossed the runway 06 not far from the aircraft number 1, flown by the leader of the Frecce Tricolori. Fortunately, the animal was fast enough to complete the crossing without being hit by any of the five aircraft, but this exclusive picture reminds us that strike hazard for both military and civilian aviation does not only come from flying animals but also from the ones on the ground living in the vicinity of airports. 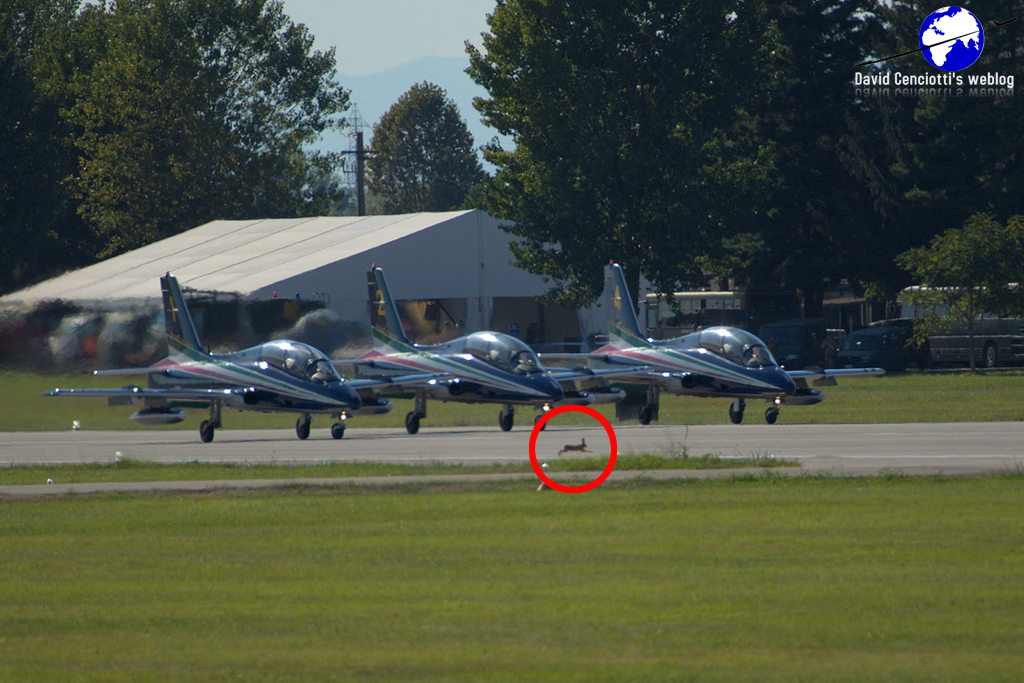 Taken at Decimomannu airbase last week, by Gian Luca Onnis, the following picture is the only available to date, of an M-346 advanced combat trainer flying with a BRD (Bombs and Rocket Dispencer). Such pod, […]