On May 14, 2009, Alenia Aermacchi M-346 “Master” made its first three ship formation flight. The 1 hours flight was performed by the two prototypes and LRIP00, representative of the series production configurati

on. Pictures of the event were taken by the M-311 aircraft that acted as camera ship in an air-to-air photo session. Alenia Aermacchi is proceeding with the last M-346 development activities and is fitting out the new hangar dedicated to the automated build-up and structural assembly lines for series production at a rate of 18-24 aircraft annually, which can be increased in case of specific needs. Thanks to the extremely advanced and automated industrialization process, Alenia Aermacchi will be able to address effectively the market demand for trainers aimed at pilots of 4th and 5th generation combat aircraft. Presently the M-346 “Master” has been chosen for a total of more than 60 aircraft and there are going to be other commercial opportunities through the participation to important international bids. 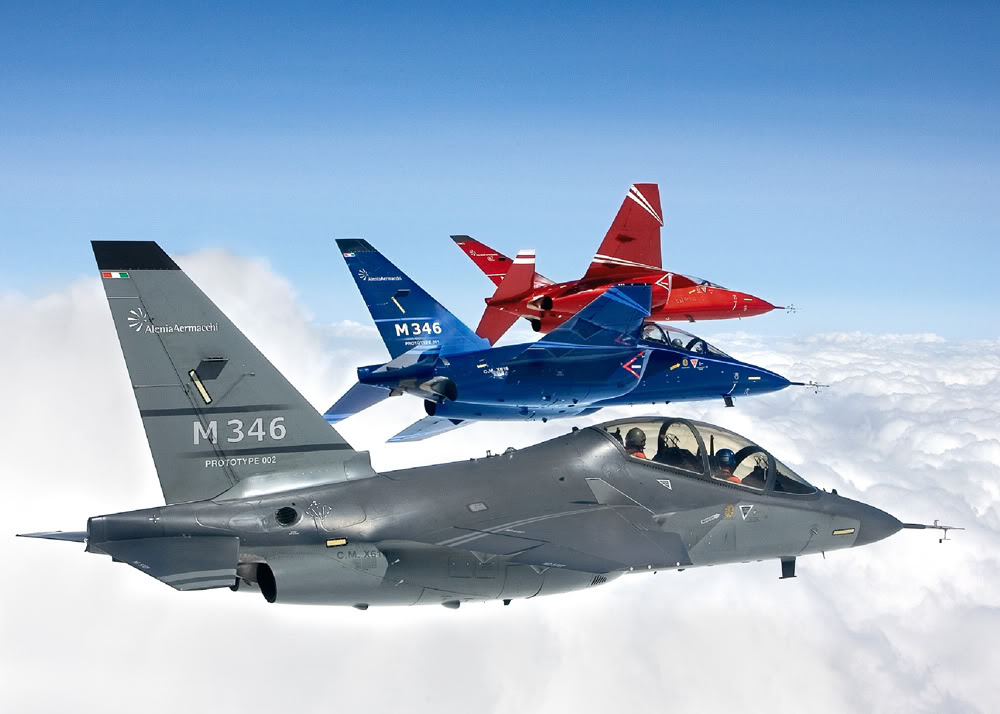 On May 19, 2009, Alenia Aeronautica announced the last important achievement of its C-27J Spartan, the best
selling tactical transport aircraft worldwide: the Aeronautica Militare (Italian Air Force, ItAF) has reached 5.000 flight hours on the aircraft. In order to celebrate the event the aircraft MM62225 “46-90” was painted with 5.000 special markings.
Since Jan. 11 2007, when the first aircraft was taken on charge by the 46^ Brigata Aerea at Pisa, 11 of the 12 C-27Js ordered by the ItAF have been delivered to replace the G.222s. The aircraft is quite different from its predecessors (the G.222 and the US version dubbed C-27A) since it is equipped with highly improved avionics, self-protection suite, two HUD (Head-Up Displays) and refueling probe. During the first two years of service, 15 crews have been qualified on the aircraft. In the near future the training and qualification capabilities of the 46^ Brigata will be enhanced with the advanced training system that will include a full-motion flight simulator similar to that of the C-130J that has been operating at Pisa since 2004.

The following artworks (G.222, C-27A, C-27J) are a courtesy of Ugo Crisponi of Aviation Graphic

If you want to read my C-27J flight report, with many pictures click here: Acrobatic flight with the C-27J

The following background information were provided by Alenia in a press release:
A total of 121 C-27J aircraft have been ordered by the air forces of Italy, Greece, Bulgaria, Lithuania, Romania, Morocco, U.S. Army and Air Force, and has also been selected by the Slovakian Air Force. The C-27J is a twin-engine turboprop tactical transport aircraft with state-of-the-art technology, avionics, propulsion and systems; it demonstrates superior performance over its competitors in all weather conditions, cost effectiveness, extreme operating flexibility and it is the only aircraft of its class offering interoperability with heavier airlifters. The C-27J is capable of performing many missions such as transport of troops, goods and medicines; logistical re-supply; MEDEVAC airdrop operations; paratroopers’ launches, humanitarian assistance and missions in support of homeland security. The C-27J is equipped with advanced avionics and engines (two Rolls Royce AE2100-D2, which guarantee 4,650 SHP power); and, thanks to a loading system perfectly compatible with that of the C-130 family aircraft, the C-27J Spartan can carry pallets weighing up to 4,700 Kg at altitudes up to 2,20 metres. The design of the avionics system is totally redundant to increase mission security and reliability, permits the aircraft to operate in any weather condition and in any operational scenario. The excellent design and performance of these systems result in a low workload for the pilots. The C-27J is able to take-off from and land on unprepared strips of less than 500 metres, with a maximum take-off weight of 30,500 kg; the aircraft can transport up to 60 equipped soldiers or up to 46 paratroopers; and, in the air-ambulance configuration, the C-27J is also able to transport 36 stretchers and six medical attendants.
The big cargo cross section (2,60 metres in height and 3,33 metres in width) together with the high floor strength (cargo capacity of 4,900 Kg/m), allow the transport of intact heavy military equipment of large dimensions. The C-27J can, for example, carry the engines of both combat and transport aircraft like the C-130, Eurofighter, the F-16 and the Mirage 2000 directly on their respective engine dollies without any additional support. The C-27J is designed, developed and tested as a true military aircraft following military standards to ensure the robustness, dependability, and performance of the aircraft. The C-27J has obtained both the Military Qualification Certificate as well as certification from the Civil Aviation Authority certifying that it is airworthy according to civil standards.