On Feb. 11, an F-16 of the 37° Stormo of the Italian Air Force, crashed into the sea between Levanzo and Marettimo, not far from Trapani Birgi airbase.

The aircraft had been involved in a night training sortie and was returning to the base when, around 20.00LT, it was struck by a lightning while crossing bad weather.

Maj. Maurizio De Angelis of the 18th Gruppo successfully ejected from the aircraft and was located and rescued from the sea by the crew of a HH-3F helicopter of the Trapani-based 82° Centro SAR.

The aircraft lost is the 5th Italian F-16 crashed since this type of fighter entered service with the ItAF as part of the Peace Cesar program. All the mishaps involved aircraft belonging to the Stormo based in Trapani. The aircraft, whose leasing is going to expire on Dec. 31 2010, should have flown about 27.000 hours (22.250 were logged at May 2007), the 60% of the flight hours bought by the ItAF (45.000 fh) but have a worrying crash rate: something around 1.85 losses for 10.000 flight hours, higher than the AMX (still grounded) and Tornado (grounded for a short period after the last accident).

It must be considered though, that 2 F-16 (MM7246 and MM7263) were lost because of a collision and 1 for a birdstrike in landing (MM7258); the very first one (MM7237) suffered a main generator failure during a night mission and the EPU failed to provide power needed to keep the electrical and hydraulic systems alive. 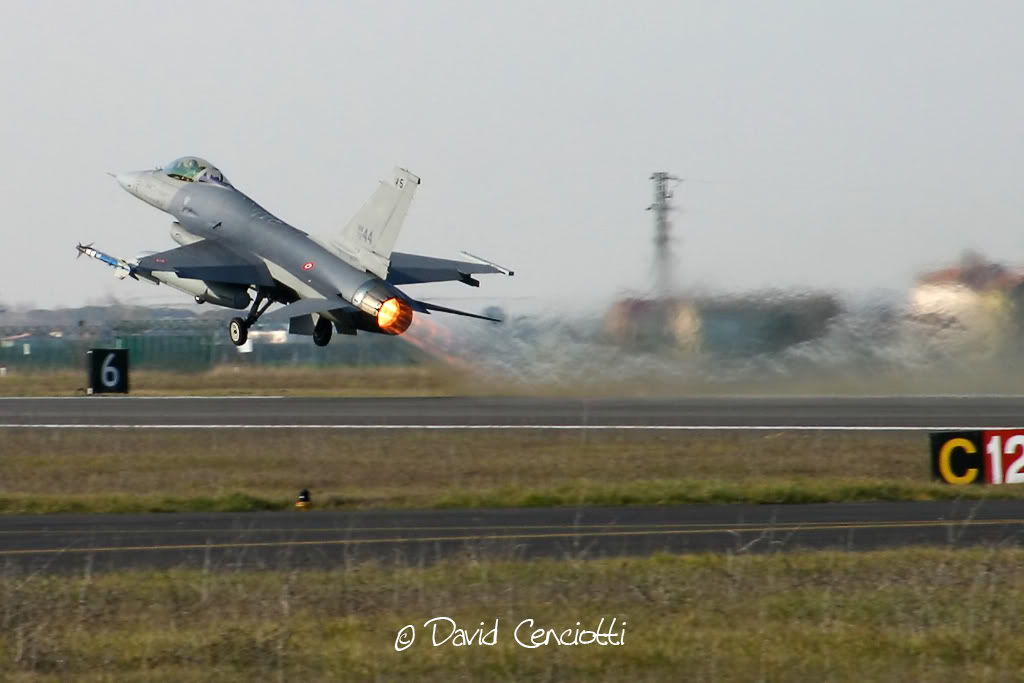 This is not the first time a military aircraft is lost because of a lightning.

Dealing with the F-16 fleet in the World, in the ’80s there were some cases of aircraft lost after being hit by a lightning strike.

In one of them, it was not the lightning itself to cause the crash but its side effect: it ignited the vapors in the empty tank beneath the fuselage that consequently exploded damaging the hydraulic system.

Someone may wonder if an aircraft is so vulnerable to a lightning strike. The answer is “theoretically not”, because the probability to be hit by a lightning is extremely low (there’s about 1 case each year).

Furthermore, the aircraft, just like a car, is shielded by the so-called Faraday Cage, a sort of cage (hence the name) externally made by a conducting material, that blocks out external static electrical fields: charges redistribute on the conduting material and don’t affect the cage’s interior.

Large commercial planes are larger Faraday Cages: if hit by a lightning when flying next or through a storm (rare, since pilots use the on-board weather radar to avoid CBs and storms that could lead to a hit), they let the current pass through the fuselage until ground, preserving the systems’ integrity.

Commercial aircraft have to satisfy stringent requirements to meet the airwothiness certifications required in the U.S. or Europe. Among them there are also standards for protection against the direct and indirect effects of a lightning strike. In particular, planes must be able to withstand the hit without suffering significant surface damage, without any possibility of accidental fuel ignition in the tanks and preserving the avionics and systems failures induced by the electromagnetic field created by the electrical charges of the lightning.

Have a look at this extremely interesting video (a few others are available on youtube) showing a Qantas 767 flying next to a storm hit by a lightning strike:

On Jun. 2, 2010, to celebrate the Republic Day, with the traditional flypast of the Frecce Tricolori over Rome. I have already explained my opinion on the flypast here. Noteworthy this year is that Google […]

Dutch F-16 Hit By Own Bullet During Mission At The Firing Range.

Ricocheting bullets can be extremely dangerous. A Royal Netherlands Air Force F-16 was damaged during live fire training exercises at Vliehors Range on the island of Vlieland in the northern Netherlands, on Jan. 21, 2019. […]

There is an Air War still going on in Syria