Baltic Air Policing is a regular mission held in the Baltic area, with the air policing assets stationed in Siauliai, Lithuania, and Amari, Estonia.

On Jan. 5. 2018 the duty in the Baltic region has been taken over by the Danes, who have deployed four F-16 Fighting Falcons to Lithuania, relieving the U.S. Air Force’s 493rd Expeditionary Fighter Squadron F-15Cs off duty. The mission is a part of the NATO Integrated Air and Missile Defense (NIAMD).

The operation has been held regularly since the year 2004, as Lithuania and Baltic States’ air defense system lacks fighter force that would be able to provide air policing duties in this critical area. Due to the fact that the region is also critical in the light of the vicinity of Russia, it “offers” a lot of opportunities to meet the potential intruders in the air – here we are referring to the Russian Air Force whose aircraft, in international airspace, “test” the readiness of the QRA assets deployed by NATO in the region.

It shall be noted that even though initially the Baltic Air Policing operation had been hosted only by the Lithuanians, at the Siauliai airbase (which underwent significant expansion and modernization, for the sake of hosting the NATO assets), after the Russians gradually become more active and somehow aggressive, the operation has been enhanced.

During the peak period of the 2014 crisis in the Crimean Peninsula region, the deployments of air assets in the area were significantly enhanced, with USAF F-15Cs stationed at Šiauliai, supported by KC-135 tankers and the second Air Policing detachment stationed at the Amari Airbase in Estonia, where the Danes made their BAP debut. Furthermore, later that year, in May, the French deployed their Rafales to the Polish Air Force’s Malbork Airbase. Overall, the RDAF F-16s has operated in the Baltic area airspace in 2004, 2009, 2011 and 2013 (operating from Siauliai), as well as in 2014 (as mentioned above – operating from the Estonian Amari Airbase).

The operation is coordinated from the German CAOC (Combined Air Operation Centre) in Ueden. This is where the orders for the assets stationed in the Baltic region come from. 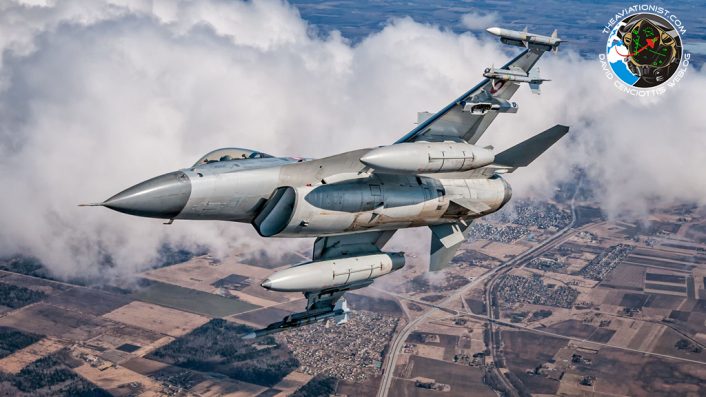 Notably, an intra-detachment rotation scheme has been adopted by the Danes for their air-policing involvement this year, which makes it possible to have more crews deployed abroad. Furthermore, the intensity of the operation is going up. Last year around 130 Russian aircraft were intercepted in the area, whereas respectively 110 scrambles took place in 2016.  Previously, 160 operations were conducted in 2015 and 140 intercepts in 2014.

The Danes scrambled their jets for the first time this year back on Jan 25. In the morning that day the NATO radars in the area picked up a radar track which did not comply with the standard legal regulations imposed by ICAO and without any transponder signal. The suspicious aircraft was flying from mainland Russia to Kaliningrad, and it turned out it was a Russian fighter. To ensure safety in the airspace, the NATO jets are then tasked with escorting the unidentified plane until it reaches the destination or complies with the rules. This is required by the ATC services to perform their work safely and, for instance, to avoid the mid-air collisions that could be caused by the fact that aircraft with their transponders turned off do not appear on the civilian radar screens. 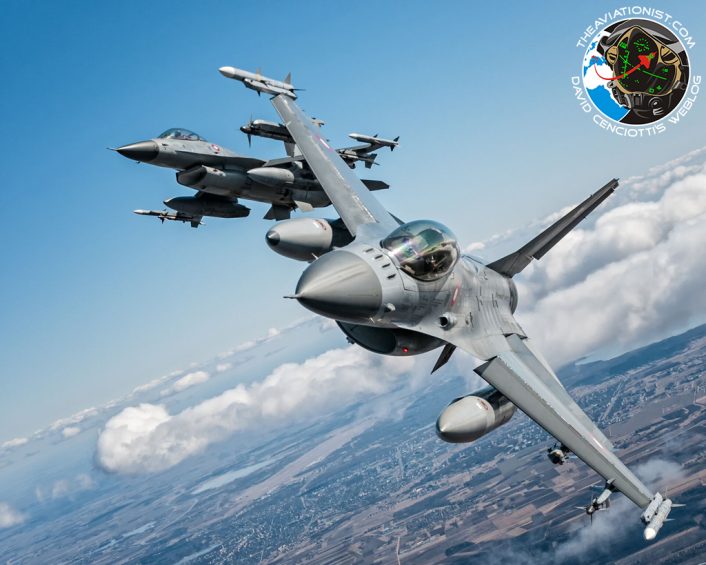 The activities in March required the jets to go up into the air several times a week. The general trend suggests that NATO is going to enhance the air policing operation in the region again soon. It has already been announced that the Spanish and Portuguese would deploy their assets to Siaullai as of beginning of the next month, which sees involvement on the part of two nations at a single base, complementing the units stationed in Amari.

During the air-to-air sortie we had a pleasure to participate in (many thanks go to the Siauliai PAOs for their immediate helpfulness and hospitality), we had a chance to experience a close encounter with the Danish Vipers. The Danes operate their modernized F-16 aircraft in the area.

The Danish military aviation component faced a problem back in the 1970s, as a need emerged to replace the aging fleet of the F-104 Starfighters. The issue was being challenging for other countries in the region back then, including Belgium, Norway and the Netherlands. Jointly, as the European Participating Air Forces, the aforesaid group became the first customers to get involved in a development program together with the US, concerning the Viper. The uniqueness of the said procurement stems from the fact that the EPAF airframes were not made in the US, but in Europe. The production facilities involved in the process included SABCA and Fokker factories in Belgium and the Netherlands. 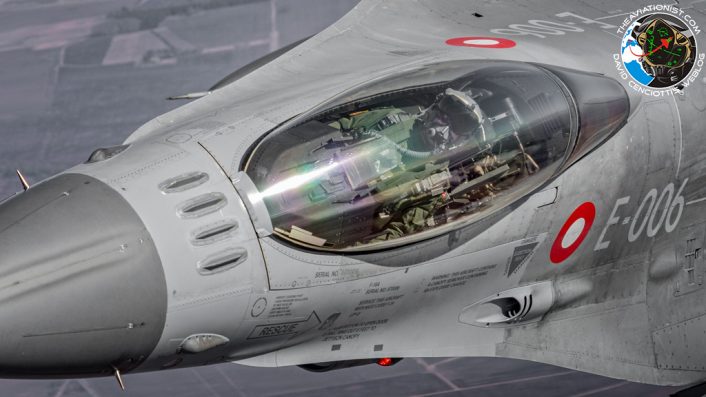 Initially, according to F-16.net, the RDAF placed an order for 46 F-16As and 12 F-16Bs, with the deliveries beginning in 1980s. The jets later underwent Block 10 upgrade, at the works in Aalborg, as a part of the Pacer Loft I program. To replace the formerly used Saab Drakens, the Danes ordered another 12 Block 15 jets in 1984, including 4 two-seaters. These were not built in Denmark. Instead, the Dutch Fokker company took over the effort. This order was to replace the older aircraft that were subjected to wear. Another seven “attrition replacements” were delivered to Denmark in 1994 and 1997.

The Danish jets were modified, in order to meet the RDAF’s requirements. All of the Vipers are fitted with a search light on the port forward portion of the fuselage beneath the canopy, which is useful for night-time scrambles. A very similar modification is also applied in case of the Canadian Hornets. However, the change was implemented in case of the Danish Vipers at the ‘design’ stage, before they were manufactured. RDAF Vipers have been fitted with the light during the initial production. This modification is identical to the one implemented in case of the Norwegian aircraft, where the searchlight, with a 450W light bulb, has also been installed. Needless to say, even though this element is not a technologically advanced one, it proves very useful in air policing scenarios, during which a visual identification of the potential intruder is required during any night-time scrambles. 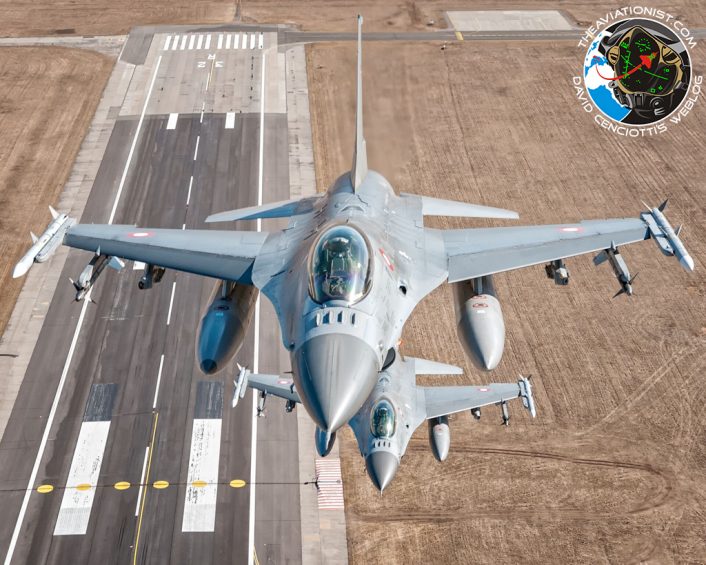 The second modification of the Danish Vipers which clearly distinguishes this airframe comes in a form of PIDS+ (Pylon Integrated Dispenser Station) and ECIPS+ (Electronic Countermeasures Integrated Pylon System) systems that have been widely used within the EPAF aircraft. The pods in question have been fitted onto wing stations 3 and 7 (ECIPS+ on the left and PIDS+ on the right wing). The aforesaid countermeasure systems have been manufactured by the Per Udsen Co. Aircraft Industry (Terma A/S since 1997) in Denmark. The dispenser section in PIDS houses either RR-170 or CCB chaff dispensers. The latter is of the same size, but houses double of the chaff quantity, when compared to the RR-170 – 60 charges instead of 30, as in case of the RR-170. Meanwhile, ECIPS+ may house electronic countermeasures, such as the AN/ALQ-162(V)6 system.

Furthermore PIDS and ECIPS pods also feature Cassidian Electronics AN/AAR-60 (V) 2 MILDS F sensors (MILDS F = Missile Launch Detection System, Fighter), which is a missile approach warning system based on a passive imaging sensor that detects the UV radiation signature of the approaching missiles, allowing the pilot to utilize countermeasures in an efficient manner. 6 MILDS F sensors (3 on each wing) and one processor have been integrated into the Terma A/S PIDS+ and ECIPS+ pylons. The sensor windows for MILDS F are clearly visible in the front and back portion of the pylons and constitute a distinguishable element of the Danish aircraft. MILDS system has been integrated on the RDAF F-16s back in 2007 (the contract was awarded to Terma in 2004).

Avionics-wise the main modifications include implementation of the Link 16 datalink and JHMCS helmet-mounted cueing system which could be spotted during our sortie with the jets – helmets featuring the JHMCS display were worn by the pilots in the cockpit. Interestingly, the Danes also found the default instrument panel clock to be not ideal, and fitted a cheap quartz watch next to the HUD, as the F-16.net website claims.

All RDAF F-16s have undertake Mid-Life Update, with all of the work carried out at the Aalborg based workshop facility.

The photo sortie involved E006 and E596. The latter jet comes from the initial order made by the RDAF to acquire their F-16s (deliveries between 1980 and 1983), while the former aircraft that acted as the flight lead during the photo operation was delivered within the framework of a follow on order, happening between 1987 and 1991. 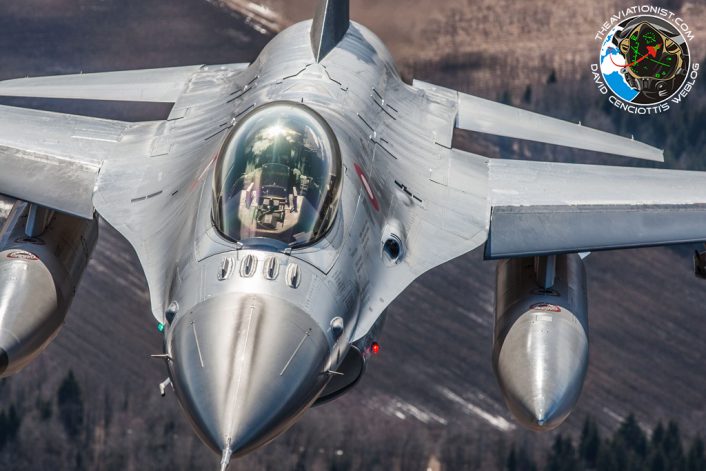 The jets we have photographed were carrying AIM-9L Sidewinder and AIM-120 AMRAAMs under their wings, which is a typical configuration adopted for the air policing duty. Note the yellow stripes on the missiles, meaning that we were accompanied by Vipers carrying live armament. Notably though the F-16s involved in our sortie over Siauliai did not carry the targeting pods – which are also an important and useful tool that is usually applied during air policing operations. During the photoshoot we were flying a Lithuanian Air Force C-27 Spartan. The external fuel tanks the jets were carrying extended the playtime we had to take the shots.

The Danish deployment is going to last until the beginning of May. The detachment is going to be replaced by the Spanish and the Portuguese, which would mean that yet again the rotation would have a doubled size at the Siauliai AB.

On Apr. 3, according to Forsal.pl. Dalia Grybauskiate, the Lithuanian President, claimed that Baltic Air Policing is not enough to protect the airspace in the region, and more defensive measures shall be put into place. She also referred to the Patriot air defence systems that are soon to be acquired by Poland as a significant enhancement of the regional security. “I hope that the United States, as well as other nations, understand the fact that protection of the Baltic States’ airspaces needs to be taken more seriously,” Grybauskiate said. 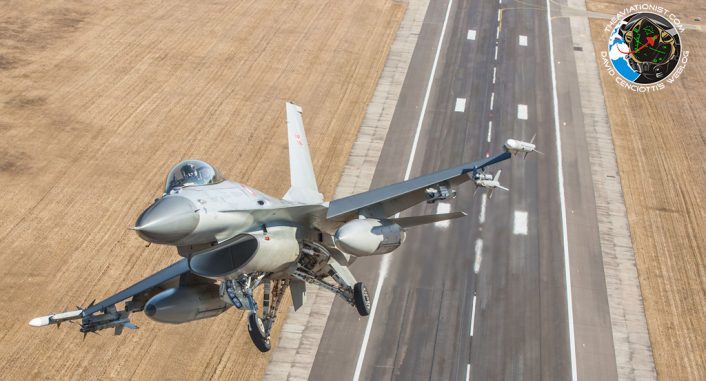 The authors would like to thank the Siauliai AB staff for their hospitality and professional attitude we could have witnessed during the photoshoot.

Aboard Moskva: That Time We Got An Unprecedented Tour Of The Russian Guided-Missile Cruiser

Years ago we had the unique chance to visit the Russian guided missile cruiser “Moskva”. And here are all the photographs we took during that unprecedented tour. As explained in detail in a previous article, […]

Updated: Turkey has just shot down a Russian Sukhoi Su-24 near the border with Syria

Images coming from Syria show a Su-24 Fencer in flames. And it’s Russian. On Nov. 24, 2015, the Turkish Air Force shot down what appears to be a Sukhoi Su-24 Fencer that, according to the […]

Social media went on a frenzy when more than a dozen aircraft (tracking online) departed from Moscow and nearby airports heading prevalently to the East. Many of those flights have since returned back to the […]