An Atlas Air Boeing 747-400 on “a military passenger charter flight” for the U.S. Defense Department’s (DoD) landed for the first time at the Polish airport of Poznan.

The soldiers were then transported to Żagań, Świętoszów, Skwierzyna and Bolesławiec from Poznan by buses, while the jet later flew to Wrocław, transporting some of the troops to an alternate destination.

Noteworthy, this was the very first time that the iconic Boeing’s airliner landed at the Poznan Ławica Airport.

According to the soldiers speaking to the press, the weather in Poland now is similar to the one in Colorado, except for more humidity and milder winds.

Originally, the Jumbo Jet was to land in Poznan (flying from Colorado Springs) on midday, however, due to bad weather it arrived at the Polish airport (with a stopover in Frankfurt) around 4.50 AM at night. 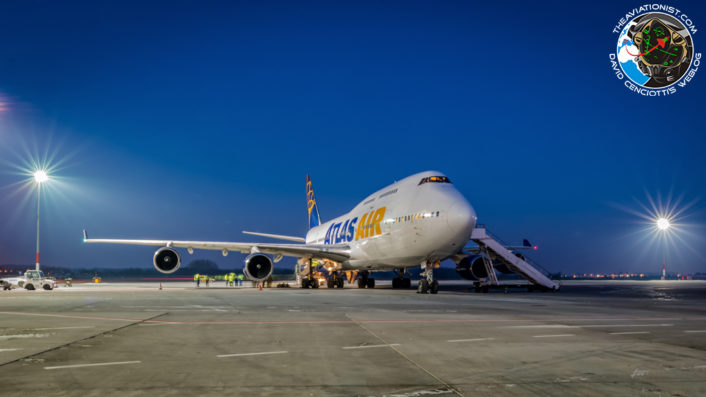 The troop transport carried out by the Atlast Air, one of the largest carriers of air cargo for the U.S. military, is part of Operation Atlantic Resolve, whose aim is to provide support and reinforcement on the NATO Eastern Flank threatened by Russia since the Ukrainian crisis.

The U.S. units deployed to Poland include medics and CRBN specialists, as well as the communications experts.

The Aviationist had a chance to be at the Ławica airport in Poznan at the night of the Boeing’s arrival, which has been possible thanks to the Airport’s marketing team. Many thanks go to Witold Łożyński, who hosted us at the departures.

On Sept. 4, 2011, beginning around 14.05 UTC, a new PSYOPS message addressed to the Libyan people has been recorded by European radio hams. The message is addressed to “Libyan fishing vessels”, proving that although […]