The risky business of being a “Wild Weasel” pilot.

Born in response to LWF (Light Weight Fighter) program, to meet the U.S. Air Force need for a small and agile fighter, the F-16 Viper has become the USAF standard multirole aircraft. Among the many missions that this combat plane can perform there is also the Suppression of Enemy Air Defenses (SEAD).

Today, the typical Air Force Wild Weasel platform (as the aircraft used in the SEAD role are best known) is the Block 50 F-16, which has replaced the F-4G Phantom. To perform this kind of mission, the Block 50 Viper mounts the HARM Targeting System (HTS) pod, which is the main tool used by the Wild Weasels to find SAMs.

Once placed on the right side of the engine intake, today the HTS is mounted on the left side while on the right side there is the Sniper targeting pod: in this way, while the HTS provides every kind of information about the enemy radar to the AGM-88 High-speed Anti Radiation Missile (HARM), the Sniper gives to the Wild Weasel F-16 the ability to deliver a smart bomb on the SAM site.

These features have changed the type of the mission, which has evolved from SEAD to DEAD (Destruction of Enemy Air Defenses).

Noteworthy, the Air Force F-16s had the chance to demonstrate their effectiveness in the SEAD role during Operation Allied Force (OAF) over Serbia, as explained by Colonel “Blink” Blinkinsop to Lt. Col. Robert “Cricket” Renner USAF (Ret.) in his book Viper Force: 56th Fighter Wing–To Fly and Fight the F-16: “A story of a stupid Wild Weasel playing with an overzealous SA-3 (Soviet SAM). A large NATO strike package was heading to the Obrva, Serbia, area to perform nighttime bombing runs and my four-ship arrived early to find and suppress any air defenses. Just before the first package arrived, my flight came under attack by an SA-3 and large-caliber AAA. I directed my number three to engage it, but he was unable to respond due to his own defensive maneuvers. So, I turned my aircraft approximately 150 degrees in the opposite direction and fired a HARM at the SA-3 site. As I pushed the pickle button, I became the target of the SA-3 and 57mm AAA.”

After evading these threats, “Blink” was able to rejoin his flight and move to another location to cover the second NATO strike package. As the attack aircraft were targeted by SAMs and AAA, Blink directed his wingmen to shoot their HARMs, dispense flares for MANPADs (Man Portable Air Defense Systems – the shoulder launched IR SAMs), and reminding the entire four-ship to watch out for AAA and for the high terrain in the area. His second (and last) HARM shot appeared to shut down the SA-3 and quiet the area.

After the second NATO strike package completed its mission, Blinkinsop reformed his flight and returned to the base.

The number two position in the four ship on that sortie was covered by Lieutenant Colonel “Rico” Malebranche who recalls: “Had six SA-3s coming up at our formation. Myself, number three, and number four were defending against them simultaneously when “Blink” rolled in and fired off a HARM at the SA-3 site. I was just getting ready to jettison my external fuel tanks when I broke the SAM line of site (meaning the missiles went stupid as he broke the SAM radar’s lock on him). I had at least two SAMs with my name on them!”

Because of his actions Colonel Blink Blinkinsop was awarded with America’s third highest military decoration for valor in face of the enemy, the Silver Star. An award earned also thanks to the effectiveness of the F-16 as Wild Weasel platform. 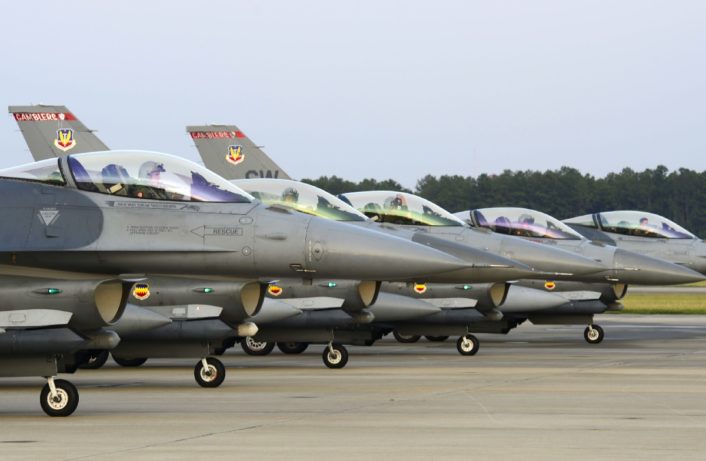 A Globemaster Pilot tries desperately to read back her Takeoff Clearance to the ATC. But she’s interrupted by her crew. The video of Professor Robert Kelly, an expert on South Korea whose interview with the […]

U.S. A-10 reportedly shot at by ISIS militants with Strela MANPADS in Iraq

U.S. A-10 Thunderbolt aircraft face the threat of Man Portable Air Defense Systems in Iraq. According to a report by Iraqi News, American A-10 were shot at with four Strela missiles during the recent air […]