The story of how the Starfighter was used to train future astronauts.

Being the first operational aircraft able to reach and maintain a speed of more than Mach 2.0, the Lockheed F-104 was a huge leap forward when strictly compared to the contemporary subsonic jets.

Thanks to its performance, the Starfighter was chosen to train test pilots destined to fly the X-15, a winged spacecraft that was air-launched by a B-52 Stratofortress, flew into space and then landed conventionally.

The major modifications to the Starfighters consisted in the addition of a 6,000 pound thrust rocket engine at the base of the vertical tail, reaction control thrusters in the nose and in each wing tip, a larger vertical tail, increased wing span, tanks to store the rocket propellants, provision for a full pressure suit, a cockpit hand controller to operate the reaction control thrusters, and modified cockpit instrumentation.

The Starfighters with these modifications were renamed NF-104s. They entered in service in 1963 and their pilots could zoom to more than 100,000 feet in a full pressure suit, experience zero “g”, and use reaction control to handle the aircraft.

Only about 35 students had the privilege to fly the NF-104 and each pilot had to be prepared for these “space flights” by using standard Starfighters. The first mission was a pressure suit familiarization flight, with the F-104 flown to high altitude with the cockpit depressurized allowing the student to experience a flight in a fully pressurized suit. To practice the zoom profile, the second flight was conducted in a two-seat F-104, with the instructor that showed to the student how reaching an altitude of 70-80,000 feet performing a 30 degree climb, while the last three missions were made in a single seat Starfighter increasing the climb angle to 45 degrees and reaching an altitude of 90,000 feet.

As described by Steve Markman and Bill Holder in their book One Of A Kind Research Aircraft A History Of In Flight Simulators, Testbeds & Prototypes, the typical flight syllabus started with taking off on jet power, climb to 30-40,000 feet, and accelerate to Mach 1.7-1.9. Then the pilot ignited the rocket engine and pitched the nose up to start the steep climb.

After two minutes the Starfighter passed through 80,000 feet, the jet engine flamed out, the rocket engine ran out of fuel and the pilot began a parabolic arc to the peak altitude.

It was during the parabolic arc that the pilot experienced “weightlessness” for about one minute and used the side stick to fire the reaction control rockets to control the aircraft’s pitch, roll and yaw motions.

Once at a lower altitude, the pilot restarted the jet engine and made a conventional landing: the whole mission lasted about 35 minutes from taxi to landing and was performed in a full pressure suit.

One NF-104 was destroyed on Dec. 10 1963. The plane was piloted by legendary Col. Chuck Yeager at that time the Aerospace Research Pilot School Commander. Yeager was attempting to reach an altitude record and after a 60 degree climb, while he was at 101,595 feet, the Starfighter experienced an uncontrollable yawing and rolling motion.

Yeager wasn’t able to recover the plane and was forced to eject at 8,500 feet.

During the separation from the ejection seat the rocket nozzle hit his face shield breaking it, while the combination of the red hot nozzle and oxygen in his helmet produced a flame that burned his face and set several parachute cords on fire.

Yeager was able to extinguish the flames with his glove hands and after the accident was hospitalized for two weeks.

The accident was depicted in the book (and film of the same name) “The Right Stuff”. 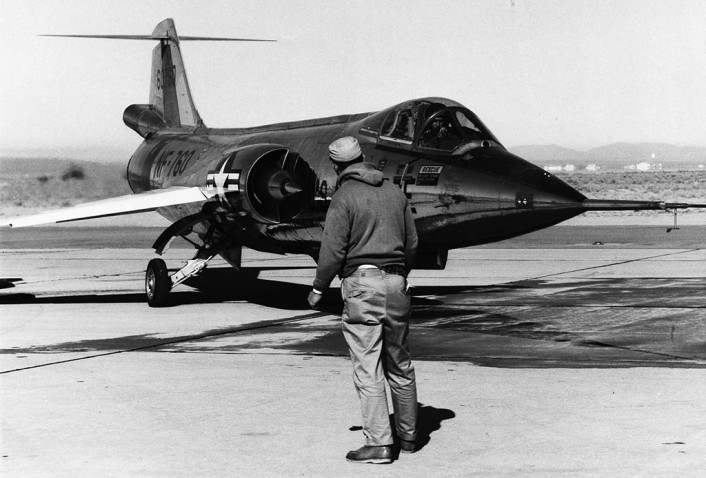 Another NF-104 flight almost ended in disaster on June 15, 1971, when Capt. Howard Thompson experienced a rocket engine explosion while trying to lit it at 35,000 feet and Mach 1,15: luckily Thompson made a safe lading to Edwards AFB using the normal jet engine.

The program was terminated when it was decided that the aerospace training mission would be performed by NASA and the last NF-104 flight was performed in December 1971.

During its service with the U.S. Air Force the highest altitude reached by an NF-104 was 121,800 feet, achieved by Maj. Robert Smith during acceptance testing.

Today the last of the NF-104s is on static display in front of the Air Force Test Pilot School at Edwards AFB.

It’s the second time a Super Galaxy lands on nose after gear malfunction in less than one year. On Mar. 15, an Air Force Reserve Command C-5M Super Galaxy performed an emergency landing at Joint […]