Most probably, not. However, the artworks  are interesting.

Although China is known to be working also on a new stealth fighter bomber, we don’t know much about the H-20, as the aircraft is believed to be dubbed.

The long-range strike aircraft should be built around the concept of a subsonic, radar evading, flying wing configuration and some scale models have even appeared at aviation exhibitions.

While previous artworks depicted shapes of Beijing’s LRS (long-range strike) inspired to several existing U.S. planes, including the F-117 Nighthawk, the YF-23 and the B-2, a new image has recently popped up on the prolific Chinese Internet.

It shows a manned tactical plane, with internal weapons bay as well as external pylons which carry stand-off missiles. The cockpit reminds the one of the Soviet-era Su-24 Fencer, a side-by-side two-seater.

The “new” shape seems like an evolution of previous concepts, even though it may well be just fan art.

Last but not least, the new stealth bomber is depicted as flying over the disputed Senkaku islands.

What do you think? Can this be Beijing’s response to the American LRS project? 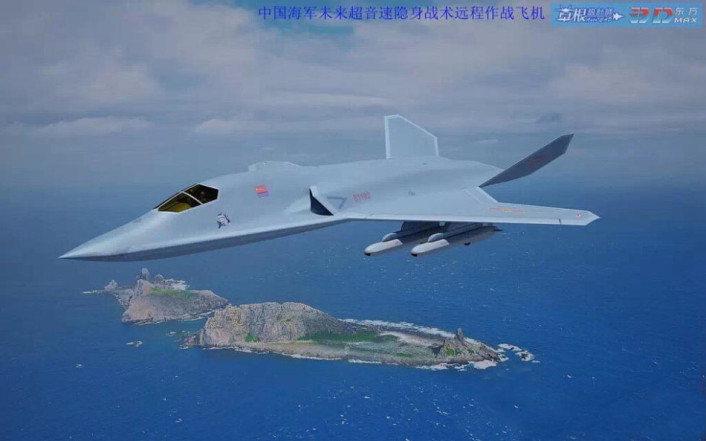 Tension in growing in the East China Sea where China established an Air Defense Identification Zone (ADIZ). First, the ADIZ was “violated” by two U.S. B-52 strategic bombers that did not to comply with any […]

On Aug. 14, the Financial Times and the NYT, followed by other media all around the world, published the news that in the days after Operation Neptune’s Spear Pakistan’s intelligence gave China the opportunity to […]

Carrier Trials Surge Ahead as China Builds Capability. Zhuhai Airshow Surprises. China continues to emerge as the most dynamic region for defense program development and introductions among the superpowers. In October, photos of their aircraft […]