Here’s the position of the Russian and Ukrainian military forces in and around Crimea.

Although it is dated Mar. 1, 2014, hence a bit obsolete how dynamic the situation on the ground is in Crimea and around Ukraine, the above map at least gives a rough idea of the position of the Ukrainian Military Bases and the Russian forces located nearby.

It was first published by a Russian language blog, along with another map focusing on Ukrainian bases (below).

As Dmitry Gorenburg of Russian Military Reform blog noted the majority of Kiev’s forces are located in Western Ukraine; a positioning that reflects the defensive posture against NATO forces of the Soviet period.

The orbat includes 160 combat planes and 25 transport aircraft: even though we may guess just a part of those are airworthy and/or combat ready, the actual figures remain a mistery. 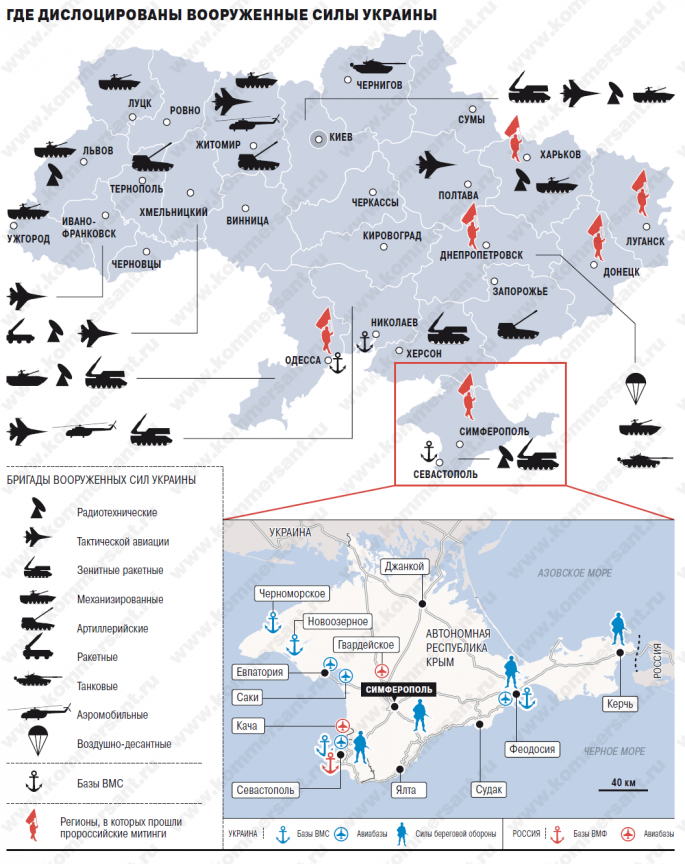 On Mar. 10, NATO announced the deployment of E-3 AWACS to monitor the airspace surrounding Ukraine, while more U.S. F-16s are deploying to Poland.

Incredibly, the camera survived the crash. The video in this post was allegedly filmed on Aug. 20, 2014, somewhere near Lugansk where a Ukrainian Mi-24 Hind gunship helicopter was hit and shot down by an […]

[Video] Russian gunships circling over the roofs of Sevastopol, Crimea

Two Russian Hind choppers having fun at low altitude over Sevastopol in Crimea. It’s not clear whether they were circling over a specific target or simply performing a show of force. For sure, the following […]