Impressive footage of a B-1B “Lancer” performing a crash landing on lakebed.

It shows the successful crash landing of a “Bone” (85-0070) on the surface of Rogers Dry Lake at Edwards Air Force Base, where the plane was diverted after an in-flight failure to the #2 hydraulic system prevented it from lowering the nose gear.

A dry lake in the vicinity is all you need in case of emergency: the huge lakebed minimized the damage to the plane as the following image shows. 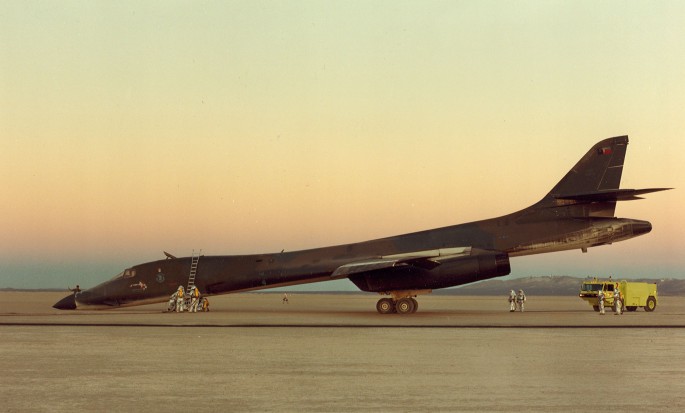 B-Roll of a U.S. Air Force B-1 “Lancer” refueling mid-air during a night air strike in Syria. Beginning on Sept. 23, B-1B bombers of the 7th Bomb Wing from Dyess AFB, deployed to Al Udeid […]

On Sept. 4, the 337th Test and Evaluation Squadron sent a solo B-1B over the Gulf of Mexico and its sea ranges to prove the concept that Lancers (or “Bones” as the swing wing bombers […]

A “Bone” deployed to Guam has taken part in Close Air Support training with Royal Australian Air Force near Australia for the first time in at least a decade. On Oct. 25, a U.S. Air […]