The Grumman Aerospace Corporation, acquired in 1994 by Northrop Corporation to form the Northrop Grumman,  was one of the most respected aircraft manufacturer in the world and leading airplanes builder for the U.S. Navy in the 20th century.

But among the fighter pilots community it was known as “Grumman Ironworks”, due to its aircraft ability to come back to the carriers or bases after having been heavily damaged, thanks to their strength and durability.

These incredible achievements were the result of the main Ironworks rule: pilots are far more valuable than planes.

The last product of the Grumman was the F-14 Tomcat which was not only one of the deadliest fighter in the aviation history, but also one of the sturdiest airframe ever built: in fact, like the Wildcat, Hellcat and Avenger in the Pacific theatre during the Second World War, the Tomcat was able to bring back home its aircrews even if badly damaged.

The first photo depicts the F-14A BuNo 159832 side number 205 which on Jun. 29, 1991 experienced a mid-air collision over South Chinese Sea with another Tomcat, the BuNo 161597 side number 201. Both aircraft were from Black Lions of the VF-213, at the time embarked on the USS Abraham Lincoln (CVN-72) and while the “201” crashed into the sea where the crew was rescued, the “205” was able to land to Singapore after loosing part of its right wing.

Another proof of the F-14 strength is given by the BuNo 161433, at the time assigned to the VF-142 Ghostriders, that is here photographed while landing aboard the USS Eisenhower (CVN-69) in the Persian Gulf. This picture was taken on Nov. 13, 1991 when the Tomcat lost its radome which hit the canopy, broke the windscreen and injured the pilot, LCdr. Edwards: however Edwards and its Radar Intercept Officer (RIO) LCdr. Grundmeier were able to make a successful landing back aboard the “IKE”. For their skills both aircrew members received the Distinguished Flying Cross decoration and  the Tomcat, which was the seventh A model to be modified to F-14B standards that mounted the new General Electric F-110 engines, was repaired and continued to fly until its retirement in 2004. 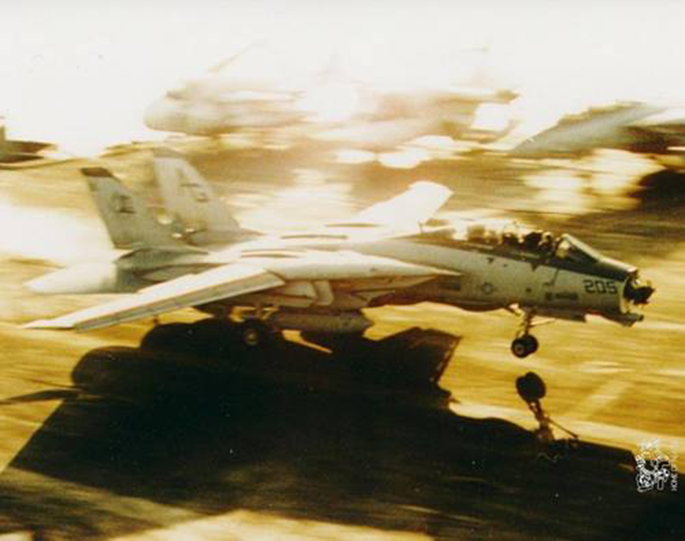 The Grumman Ironworks heritage is well shown in the following video: at first sight it appears to be a standard carrier landing, but if you stop the video at 0:21 you can see this F-14A from Checkmates of the VF-211 landing aboard the USS Enterprise (CVN-65) without its right vertical stabilizer (and not without a wing like the title of the video says)!

Most probably, the best recognition to the Grumman Ironworks and to the F-14 came from Cmdr. James E. Howe, the commanding officer of the VF-31 Tomcatters, the last Tomcat Squadron, who brought the last flying F-14D (BuNo 164603) to Farmingdale Republic Airport on Oct. 4, 2006: “It is truly a comfortable feeling when I man the aircraft and look down at the rudder pedals and it says Grumman. I know that I am going to make it back.”

Last of the legendary U.S. Air Force F-4 Phantom jets to become yet another missile victim

The last of the produced F-4 Phantom jets has been converted into a flying dummy target-drone for missile training. The plane was a part of 309th AMARG (Aerospace Maintenance and Regeneration Group) based in Tuscon, […]

Here’s What A Catapult Shot On Christmas Day In A U.S. Navy C-2 Greyhound Looks Like From The Cockpit

Strap in the cockpit of a C-2 Greyhound as it launches from USS Harry S. Truman aircraft carrier on Christmas Day a few years back. Although Christmas Day is just an ordinary work day for […]