Six F-22 Raptor aircraft belonging to the 3rd Wing from Joint Base Elmendorf-Richardson have arrived at Lajes field, in the Azores on Sept. 27.

The aircraft were deploying to an undisclosed location in the Middle East: considered the almost permanent presence of the stealth fighter jets at Al Dhafra, it is quite likely the Raptors photographed by André Inácio were on their way to the large U.S. base in the United Arab Emirates.

Few days ago, Chief of Staff Gen. Mark Welsh said that an F-22 Raptor flying an HVAAE (High Value Air Asset Escort)  over the Persian Gulf flew under two Iranian F-4 to check out their weapons load without them knowing that he was there, and then pulled up on their left wing, called them and said ‘you really ought to go home’ because they were pursuing an MQ-1 Predator.

The 3rd Wing has recently developed a new concept to deploy four F-22s and make them ready for combat from a remote location in 24 hours. Raptors from JBER in Alaska are among the F-22s with the most recent “Block 3.1″ hardware and software upgrade, that provides the ability to find and engage ground targets and drop GBU-39 small diameter bombs. 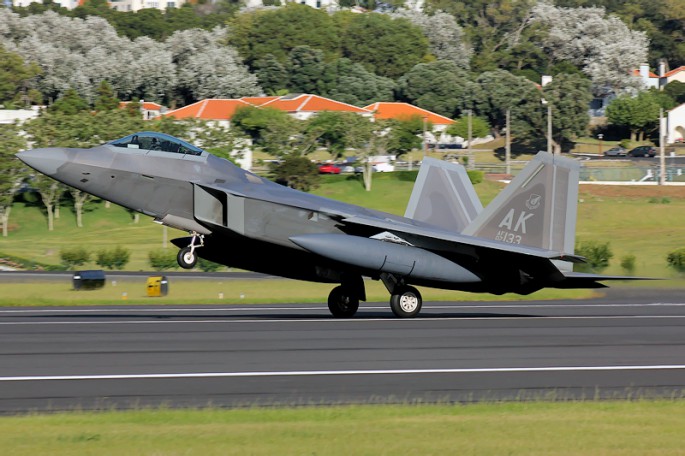 F-22 to deploy to Japan. With a solution to the oxygen problem (and some concerns about the AMRAAM missile)

As the debate about the F-22 “invicibility” goes on after the confrontation with the Eurofighter Typhoon during the Red Flag Alaska, some good news should ease some tension will help ease tension within the Raptor […]