Many videos showing the so-called “Pahpad” drone, made in Iran and used by Syria to spy on the clashes in Homs were uploaded by the rebels since the beginning of the uprising in Syria.

All the footage depicted the made in Iran UAV (unmanned aerial vehicle) from the ground or what remained of the crashed ones.

Until Jun. 12, when a new video showed a seemingly intact “Pahpad” in the hands of the rebels. 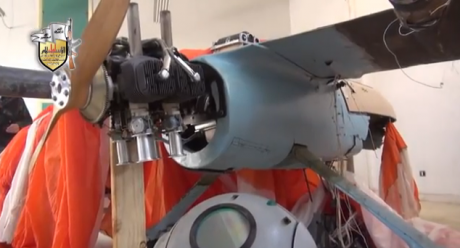 The new video provides close-up images of the mysterious drone: the engine, the wings, some numbers (as aircraft’s individual codes), as well as a turret, most probably the one of the FLIR (Forward Looking Infra Red) camera.

Noteworthy, the airframe’s base color is light blue, as in the first images of the Iranian drone published on the Mashreghnews.ir website, with a sand-colored coat.

“Pahpad” (پهپاد) is not actually the official name of the UAV but the short form of “parandeye hedayat pazire az rahe door” (“پرنده هدایت پذیر از راه دور”) that is the Persian for “remotely piloted aircraft”.

Watch An Iranian F-4E Phantom Do A Roll Near A U.S. Navy F/A-18E Super Hornet During A Close Encounter

An Iranian Phantom performs what loosely reminds a Top Gun stunt while “intercepting” an American Super Hornet. We don’t know when nor where this was filmed, still the footage, reportedly shot from an Iranian Phantom’s […]

An interesting behind the scene video was shot on Apr. 17, when Iran commemorated National Armed Forces Day with a military parade at Tehran. It shows, Islamic Republic of Iran Air Force (IRIAF) pilots before, […]