Unfortunately, they are one year late…or in fact four years late. 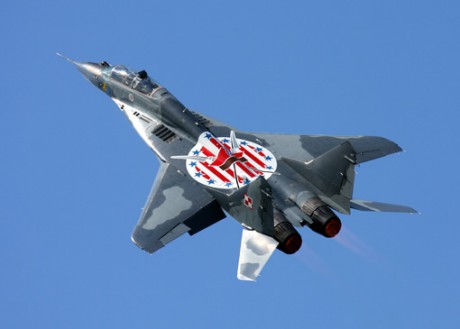 It’s been four years ago that ‘Red 15’ MiG-29UB was given a characteristic emblem of 303rd Squadron that Polish aviators flew in the Battle of Britain.

The Kościuszko Squadron not only did participate in Battle of Britain but also, as the 7th Squadron, in the Polish – Bolshevik war.

It’s been some time since the aforementioned MiG-29UB has had an emblem on its back and has amazed the audiences on several airshows.

The sign was designed by Eliott Chess, who was an American volunteer in the Squadron. The emblem got its low-vis, and more contemporary version by Robert Gretzyngier and it appears on more than one Fulcrum.

Mr. Gretzyngier is a co-founder of the Historical Foundation of Polish Aviation, which aims to popularize Polish aviation history. The Air Force commander general Lech Majewski approved the unusual way the MiG-29s were to be treated.

What is more, in May last year the Migs got portraits of Polish WWII aviators and aces painted on their V-fins. It is a truly unique idea, which aims at raising the awareness of the foreign air show visitors.

The MiG-29 is a frequent guest e.g. on the Royal International Air Tattoo.

The whole concept is unusual, since every Fulcrum has a different pilot painted on the V-fin.

It was back in June 2012 when the MiGs in special painting scheme made their first public appearance on a small air show in Janow. The portraits were hand painted by volunteers, including: Piotr Abraszek, Paweł Bondaryk, Grzegorz Dwórnik, Robert Gretzyngier, Marcin Hutny with his son, Paweł, Adam Kostyra, Wojtek Matusiak, Tomasz Obrębski and Marek Rogusz.

The project does not only feature the paintings, as each of the MiGs that would deploy to an air-show would get a set of leaflets that would clarify the background of the pilot featured on the v-fin.

This is certainly an unusual and nice way to introduce the foreigners to the history of the Polish military aviation.

The v-fins on MiG’s feature:

The Polish media are far from being up to date, as the MiGs have already made their appearance on many air shows and the portraits of WWII aviators are not really a big news.

India has signed a new contract with Russia that settles the cooperation regarding the BrahMos missile. With the agreement signed in 1998, New Delhi and Moscow had initially agreed for a 15-year partnership, then extended […]