In May 2012 The Aviationist covered the story of the Eurocopter EC225 Super Puma that experienced an emergency whilst ferrying oil workers from Aberdeen (Scotland) to the Maersk Resilliant and Ensco 107 drilling rigs in the North Sea carrying 14 people.

The pilot reported a low oil warning light had come on in the cockpit which had caused him to make the emergency landing on water. A similar incident occurred on Oct. 22, 2012 when a second Puma carrying 17 people also made a emergency landing again on water due to similar reasons.

In both cases, all the people on board survived the ditchings.

Following the second incident, all Puma helicopters involved in overwater ops were grounded until further notice by the UK’s Civil Aviation Authority and the Air Accident Investigation board started an in-depth investigation into the cause of the problem with the helicopter.

The European Aviation Safety Agency (EASA) wasn’t quite so strict on its limitations to the operation of the EC225 LP Puma: it suggested that Pumas that do not have the vibration monitoring system fitted or its not working are no able to operate over water.

According to the Emergency Airworthiness Directive issued by EASA during October 2012 the reasons behind the ditchings were as follows:

“In May 2012, an EC 225 LP helicopter carried out an emergency ditching in the North Sea after warning indication of MGB loss of oil pressure and subsequent additional red alarm on the MGB emergency lubrication system.

A full circumferential crack of the lower vertical shaft of the MGB bevel gear occurred in the area where the two sections of the shaft are welded together. As a result, the vertical shaft ceased to drive the main and backup oil pumps, leading to warning indications of the loss of the MGB main and standby oil lubrication systems. The crew activated the MGB emergency lubrication system and, following a subsequent warning indicating failure of that system, performed a controlled ditching into the sea.

Results from the investigation of the failed shaft revealed that the crack had initiated from an oxidation pit found in the chamfer of the vertical shaft welding stop hole. This bore hole is fitted with a plastic plug under which the corrosion became trapped into a confined area of the hole chamfer whose shape had been previously modified by a production change in the manufacturing process of the MGB bevel gear.

A thorough review of the production files identified the S/Ns of vertical shafts manufactured after the production change as a batch of potentially affected parts. Although the corroded vertical shaft failed after a low number of accumulated flight hours, the investigation showed that failure could not be precluded at any specific value of accumulated flight hours, therefore the crack could have initiated at low MGB torque levels.

This is the reason why AS 332 models might be affected in the same way as EC 225 helicopters. The investigation also determined that, prior to the flight during which the helicopter ditched, the Vibration Health Monitoring (VHM) system installed on the helicopter had identified a rising trend in certain monitoring parameters associated with the MGB oil pump drive system.”

The Directive concluded that:

“For the reasons described above and pending further results from the investigation, this new AD retains the requirements of AD 2012-0115E, which is superseded, extends its Applicability to all vertical shafts, regardless of S/N, reduces the time intervals for downloading and reviewing the VHM data and requires this for any flight over water. 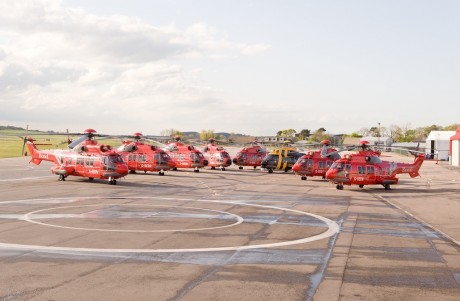 With the entire Puma fleet for offshore operations grounded, Eurocopter’s boss Lutz Bertling has admitted that the UK Oil and Gas industry has lost confidence with both the EC225 and Eurocopter itself. He said that his first concern was to regain that confidence by allowing industry figures access to the investigation and to how they intend to remedy the problem, which they think is caused by resonance rather than the part itself.

Whilst all of the above was taking place, employment Unions representing the oil workers stated that oil workers are at added risk of loosing their jobs because of logistical problems associated with the grounding of the Super Puma fleet.

It is thought that it will take until February 2013 for the operating restrictions to be lifted from the Puma fleet.

In April 2009, a Bond-operated EC225 crashed into the North Sea while enroute to a BP’s Miller platform because of a catastrophic gearbox failure. Two pilots and 14 passengers died in the incident.

Poland preparing to buy new helicopters for the Army

The Armament Inspectorate of Poland has relased the news that negotiations regarding the technical side of the helicopter contract under which 70 helicopters will be procured by the Polish Armed Forces have started. The companies […]

The Germans will probably cancel the Eurohawk drones programme, said Reuters agency today. The reason for such course of events is not the cost of the drones itself, but thes cost of adapting the drones […]

Another Super Puma helicopter has crashed into the sea off the Scottish coast, again ferrying oil workers from the North Sea oil rigs to dry land. The helicopter came dowm 2 miles short of the […]