With the traditional airbases in Southern Europe filled with drones, special operation aircraft and support planes possibly deployed to the Mediterranean sea in anticipation of a strike in Libya or Northern Mali, U.S. planes going to the Middle East or returning from a tour of duty in Afghanistan, have been forced to change their typical route from the CONUS and back, lately.

Between Sept. 30 and Oct. 1, 18 A-10 Thunderbolt jets belonging to the 355th Fighter Wing from Davis Monthan Air Force Base, Arizona, after a stopover at Westover Air Force Base, landed at Aviano airbase, in NE Italy on their way to Afghanistan. Even if Aviano in one of the most important airbases in Europe, it’s rarely visited by airplanes deploying to the Middle East.

On Oct. 12, 13 A-10Cs belonging to the 188th Fighter Wing, AR ANG, and 175th FW, MD ANG, made a stopover at Decimomannu airbase, Sardinia, Italy, on their way back from a combat tour in Afghanistan. Whereas Aviano is the permanent base of the 31st Fighter Wing and its two F-16 Squadrons, Decimomannu does not host any American unit. Hence, the use of this airport is at least weird.

Naval Air Station Sigonella, in Sicily, is usually used for such stopovers. However, the base is not only busy with U.S. planes and helicopters deployed there in the aftermath of the Benghazi consulate attack on Sept. 11, but will soon host civil planes moved there from the close Catania Fontanarossa airport (that will be closed for works from Nov. 5 to Dec. 5, 2012).

Not only U.S. combat planes crossing the Pond are using different bases.

Quite surprisingly, on Oct. 17, local spotters saw another unusual plane arriving at Decimomannu for a temporary deployment: a NATO E-3 AWACS. Among those witnessing the arrival of the E-3A, there was also Roberto Zanda, who took the following interesting picture (and all the others you can find in this post). 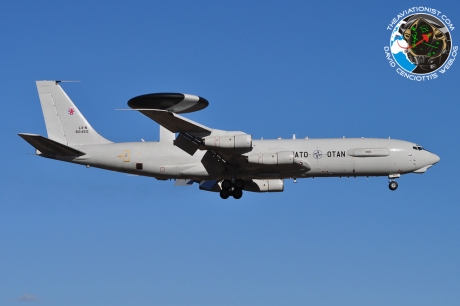 All images in this post courtesy of Roberto Zanda

Although the reason of the deployment is not clear (and might be not connected to a build-up in the Mediterranean Sea), the NATO Sentry, is an extremely rare sight in Sardinia. In fact, when they are not at the NATO Airborne Early Warning And Control Force E-3A Component’s base at Geilenkirchen, in Germany, such planes normally use one of the FOBs (Forward Operating Base) in Aktion, Greece; Trapani, Italy; and Konya, Turkey.

About David Cenciotti 3984 Articles
David Cenciotti is a freelance journalist based in Rome, Italy. He is the Founder and Editor of “The Aviationist”, one of the world’s most famous and read military aviation blogs. Since 1996, he has written for major worldwide magazines, including Air Forces Monthly, Combat Aircraft, and many others, covering aviation, defense, war, industry, intelligence, crime and cyberwar. He has reported from the U.S., Europe, Australia and Syria, and flown several combat planes with different air forces. He is a former 2nd Lt. of the Italian Air Force, a private pilot and a graduate in Computer Engineering. He has written four books.
Website

The following video is not only interesting for the stunning footage showing some A-10C Warthog aircraft with 190th Fighter Squadron refueling from a KC-135 but because it shows, from a quite unusual point of view, […]