You may think that Darth Vader was flying an HH-60G Pave Hawk helicopter, by looking at the following cool photograph taken by Rob Birmingham. 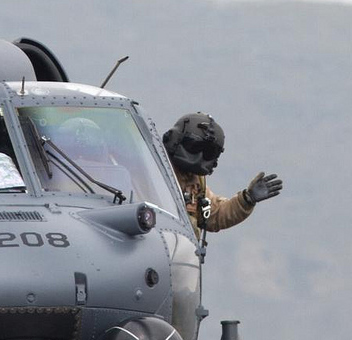 However, the one worn by the airman leaning out of the chopper’s left hand door is not the mask of the main character of the Star Wars saga, but a Maxillofacial Shield (MFS) attached to the standard HGU-56 helmet.

The MFS is used to safeguard the wearer’s lower face from rotor wash, flying debris and windblast during helicopter operations.

Utøya island attack: another example of news helicopters faster to the scene than police choppers

Yesterday, a friend of mine sent me a message after seeing images taken from a helicopter of Anders Behring Breivik shooting people at Utøya island during the so-called 2011 Norway attacks. He couldn’t understand why […]

Eight years since President George W. Bush congratulated the prime ministers of Bulgaria, Estonia, Latvia, Lithuania, Romania, Slovakia and Slovenia for becoming NATO members, Bulgaria and United States continue to build upon their partnership. For the […]