Even if the main U.S. media outlets have already published it, I still think the paper shown below deserves some attention: it is the memo by the (then) CIA Director Leon Panetta, giving the go ahead to the May 1, 2011 raid, dubbed “Operation Neptune’s Spear” that killed Osama bin Laden at Abbottabad, Pakistan. 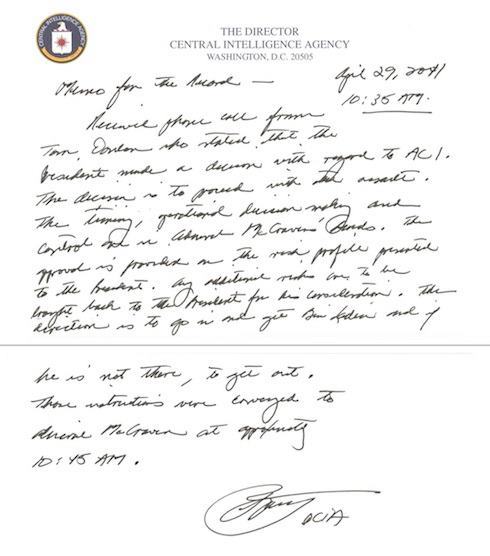 The memo was obtained by Time magazine for this week’s cover package on the Osama Bin Laden’s first anniversary. Time was able to “decypher” it:

Received phone call from Tom Donilon who stated that the President made a decision with regard to AC1 [Abbottabad Compound 1]. The decision is to proceed with the assault. The timing, operational decision making and control are in Admiral McRaven’s hands. The approval is provided on the risk profile presented to the President. Any additional risks are to be brought back to the President for his consideration. The direction is to go in and get bin Laden and if he is not there, to get out. Those instructions were conveyed to Admiral McRaven at approximately 10:45 am.

The U.S. willingness to use Stealth Black Hawk helicopters during the Osama Bin Laden raid shows the importance of a mission involving Special Forces, aircraft, ships, drones, satellites and who knows how many new/unknown technologies, deep inside a foreign country’s territory, as if Pakistan was the worst American enemy.

As we know, President Barack Obama gave the go ahead to the operation on Apr. 29 at 08.20AM, in the Diplomatic Room, before leaving for Alabama. According to the reports, he had met his “national security adviser Thomas Donilon, counter-terrorism adviser John O Brennan, and other senior national security aides to go through the detailed plan to attack the compound and sign the formal orders authorising it”.

In the cyber age, this memo shows that handwritten papers are still an effective way to exchange secret orders or other classified information.

As hypothesized last year, when the footage showing Obama “stealthily” exchanging pieces of paper with Air Force General Ed Wilson on arrival at Cape Canaveral, Florida, few hours after authorizing the raid, fueled theories according to which the President of the U.S. gave the Air Force General, Commander of the 45th Space Wing, and Director, Eastern Range, Patrick AFB, Fla., information that could be related to the OBL raid.

The Day We Learned About The Stealth Black Hawk Used In OBL Raid.

Since 2011 we have collected the description of someone who was in Afghanistan and saw the secret MH-X Stealth Black Hawk helicopter recover after the raid. While its shape is still a mystery, here’s an […]

On Aug. 14, the Financial Times and the NYT, followed by other media all around the world, published the news that in the days after Operation Neptune’s Spear Pakistan’s intelligence gave China the opportunity to […]

Photo: President Barack Obama inside a CH-47 in Afghanistan (without flak jacket)

Just released by the White House, this photograph, taken on May 1, at Bagram airfield, shows Barack Obama talking with Ambassador Ryan Crocker aboard Marine One moments before the helicopter took off to bring the […]