The video of the AH-64D belonging to the 1-227 AvCav Regiment from FOB Sharana crashing on Feb. 6, 2012 in the Paktika province in Afghanistan went viral and almost anyone interested in military aviation has already seen it.

But I’m not sure everybody has had the opportunity to notice how close to crashing onto a military watching the fiesler-like maneuver the lucky US Army crew (lucky since they were not killed in the accident) went. 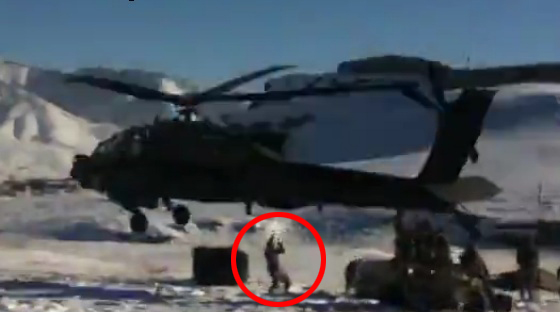 The Apache was part of a formation of two choppers performing armed overwatch for patrols picking up air-dropped supplies.

The maneuver was flown incorrectly since the beginning, according to Aaron Casarin, a pilot with several thousand flying hours on combat choppers:

The pull-up is not linear: the nose rises, but the tail tends to slip and fall instead of following the natural development of the maneuver. In my opinion this is indicative of the fact that the pilot began the climb with the cyclic then reduced the power as if he wanted to make a quick wingover.

Only at a later time he used again the power to help the chopper gaining some altitude. Obviously, at that point he had a low altitude, used all the available power to rotate the helicopter and a heavy fast descending mass.

This accident, whose outcome was not tragic by pure luck, reminds us why daredevil maneuvers and improvised “air shows” are so dangerous for both crews and spectators regardless of the skill and experience of the pilots.

A proof of poor airmanship rather than a sign of bravery.

The most interesting, dramatic (recent) helicopter pictures from all around the world

More details about the KC-135 Stratotanker belonging to the 22 ARW (Air Refueling Wing) from McConnell Air Force Base that crashed on May 3, 2013 in Kyrgyzstan have surfaced in the last hours. The plane, […]