On Jan. 30, Iran has announced the development of a new UAV (Unmanned Aerial Vehicle) called the “A1”. According to the information released so far, the new drone allegedly has a service ceiling of 10,000 feet, an endurance of two hours and can carry up to a 11lbs (5kg) payload. Furthermore, it has an engine running on hi-octane gas/oil mix (2 stroke engine??) with a 2 blade pusher propeller and can be either launched from a ramp attached to the bed of a truck or ship-launched from rocket launchers.

These “features” seem to suggest that the new drone  is another variant of the Ababil indigenous UAV family, which already includes the Ababil-5,  used as a medium range surveillance platform, and the Ababil-T, a short to medium range UCAV with offensive capabilities. 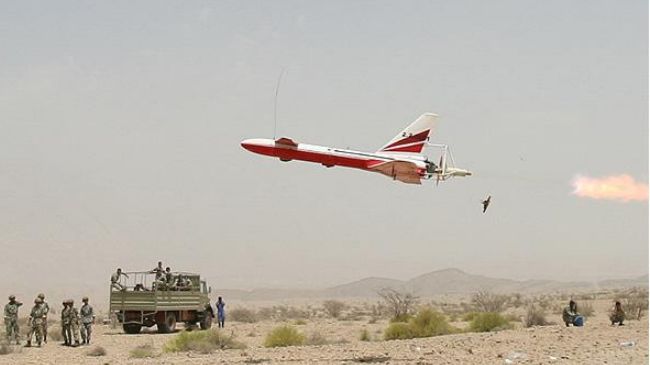 Press TV website which broke the news also mentions a –B and a –S version but does not disclose what the purposes of these are.

It was an Ababil-T drone, allegedly launched from within Lebanon and sported Hezbollah markings, that was shot down in 2006 by an Israeli Air Force F-16 using a Rafael Python 5, about 5 nautical miles off Israel’s coast.

The launching of the new drone is a further evidence of a blooming indigenous UAV program which has similar beginnings to that of the Israeli UAV program, started many years ago to develop drones for artillery spotting and battlefield overwatch as well as decoys for SAM sites (they are used to personify manned assets and spur a reaction by the SAM site that can be then attacked by other SEAD assets).

Although the significance of Iran’s UAV program remains unclear (especially if we consider the claims about the prodigious performance of some drones that are nothing more than scale models), it’s once again interesting to notice how the Iranian government use the local media to trickle out information on new systems being developed by Tehran.

The Aviationist will monitor further developments as and when they arise.

Poland to Procure Synthetic Aperture Radar Pods for Its F-16s?

Looks like the DB-110 Pod Is not Enough For the Polish Air Force. The Armament Inspectorate of the Polish Ministry of Defense announced a launch of a procurement procedure, on Oct. 6, 2020, aimed at […]

Western officials are confident that Iran fired two surface to air missiles that brought down the Ukrainian B737 aircraft as a new video allegedly showing a missile hitting the airliner emerges. According to various U.S. […]

On Jun. 10, 2011, I attended the Thunderbirds’s rehearsal at Jesolo for the Air Extreme 2011 airshow. Pictures I’ve taken show plenty of condesation clouds being generated by the USAF demo team’s F-16s. Even spectators […]