Although being published on various websites, the image below remains noteworthy since it is the only one we’ve seen so far clearly showing a Libyan Arab Republic Air Force plane striking the rebels positions.  The photo (by MARCO LONGARI/AFP/Getty Image) shows a Su-22M-3K “311” (even if the captions speaks of a Libyan “Mig”….), most probably armed with anti-tank RBK-250s canisters (containing 150 AO-1 fragmentation bomblets) , over Ras Lanoof on Mar. 9, 2011. 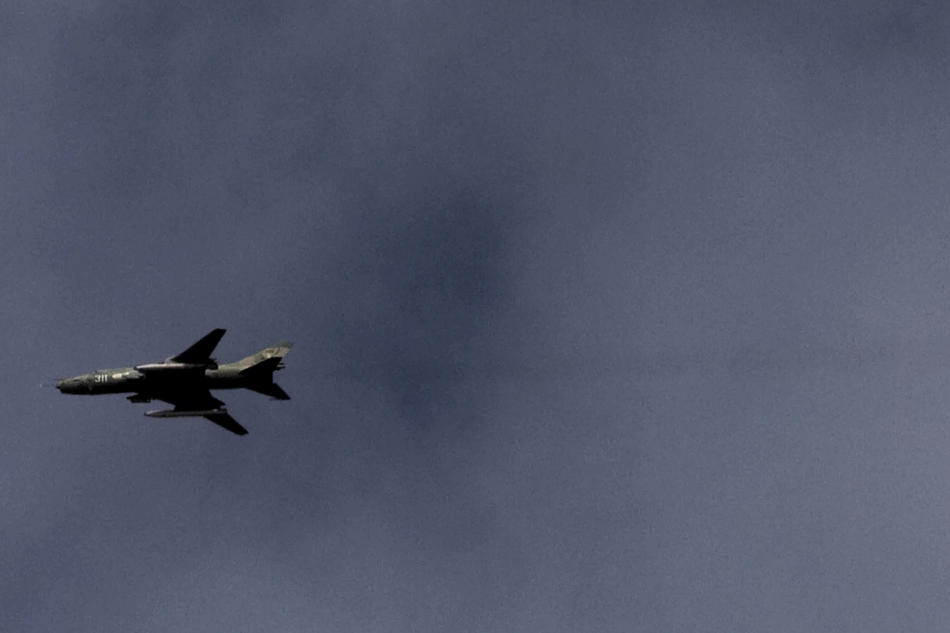 Let’s quickly analyse the picture.
First of all what can be noted is that the Libyan aircraft is operating at low level, hence lower than the altitudes the LARAF fighters were reported to fly in the first weeks of the (civil) war againts the rebels. In fact, in an article about the No-Fly Zone published a few days ago on Dangerroom titled “No Moammar, No Fly: How to Stop Gadhafi’s Planes” Spencer Ackerman writes:

Halter notices something significant about the Libyan MiG and Mirage jets: They’re flying at about 15,000 feet, and only during the day. That tells him they’re worried about shoulder-fired and truck-launched missiles from the rebels beneath them, and their own pilots aren’t very accurate at night. Accordingly, that means any Combat Air Patrol to keep the Libyans out of the sky should cover the daylight hours — 14, 16 hours at most.

The main reason for changing the attack profile from HI to LO could lay in the need to be more accurate in aiming and bombing: footage has already shown LARAF planes dropping bombs way off their targets (to the extent that some suggested the inaccuracy could be deliberate rather than a sign of inadeguate training).
On the other hand, even if the above image doesn’t provide enough visual details to estimate the actual altitude of the Libyan fighter, we can guess that the Su-22 “311” is not flying at ultra-low level (let’s say below 500 ft), most probably to remain well outside the envelope of the Anti-Aircraft weapons in the hands of rebels that claimed the downing of 3 LARAF fighters between Mar. 6 and 7, during the offensive in Ras Lanoof area. Anyway, whatever the attack profile is, it is quite clear that LARAF has been achieving better results in the last days, as images of bomb blasts on target (or quite near) show, enabling Gaddafi’s forces to push rebels in the east back from the strategic Ras Lanoof oil refinery they briefly held.
According to the information collected by Tom Cooper Editor of ACIG.org, at least a Sudanese and a Syrian Su-22 pilots were captured after their aircraft were shot down by ZPU-4s on Mar. 6. This would confirms rumours that mercenary Syrian pilots along with those from other nations (Ukraina, Algeria, Sudan etc) have been operating in Libya flying LARAF fighters and, at the same time, would explain why the Libyan jets have been obtaining better results for the last few days. Actually, Syrian presence is something more than a rumour, since SyAAF pilots have been operating in Libya since 1980s (even if some were reported earlier, in mid-1970s), as part of a mission established following the signature of military agreement, and it is still possible that those flying the LARAF jets against the rebels in the eastern Libya are either retired Syrian pilots (who remained in Libya) or active SyAAF pilots sent there to strengthen Gaddafi’s loyal air force.

According to a report published in these hours by the UN Commission of inquiry on Libya, the coalition of NATO and non-NATO members, operating within Operation Unified Protector to enforce the UN Security Council resolutions […]

Clear footage of a Sukhoi Su-24 Fencer in action over northwestern Syria The Syrian Arab Air Force was believed to count on 20 Su-24 Fencer aircraft at the beginning of the uprising. The aircraft, based […]