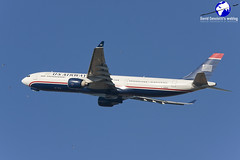 I took this picture on Feb. 5, 2011. This US Airways A330, just departed from Rome Fiumicino airport’s runway 25, seems to be surrounded by birds. Can you spot them in the picture? Most probably just a visual effect caused by the zoom (400mm lens) but interesting since birdstrikes (or more in general, significant impacts with animals) are somehow rare in commercial aviation but pose a threat especially during take off and landing phases as often discussed on this blog.