Shot down over Sinai

On Feb. 21, 1973, the B-727 “5A-DAH” belonging to the Libyan Arab Airlines regularly scheduled as Flight 114 from Tripoli to Cairo via Benghazi was shot down by two Israeli F-4 Phantoms over the Sinai Peninsula. Of the 113 people on board, there were only 5 survivors, including the co-pilot.
After a technical stopover in Benghazi – Eastern Libya – the airliner continued its route to Cairo. As the aircraft started to overfly Northern Egypt, it seems that a large sandstorm forced the crew (mostly of French nationality under a partnership contract between Air France and Libyan Airlines) to navigate only by relying on the on-board instruments. The situation was also worsened by the inefficiency of the Egyptian radio navigation system: in other words, the whole VOR system of the Cairo area and its radar surveillance were out of service. At around 13:44 LT the crew started to suspect that they had made a navigational error since they could not find any navigation beacon and they could not establish the aircraft position. Actually, the aircraft was flying over the Sinai Peninsula, (at that time militarily occupied by Israel since the Six Days War of 1967) and, unfortunately, it was in bound to Bir Gafgafa Israeli airbase. The Israeli Defense Forces were on high alert at that time as Israel was in a state of war with Egypt since the Six Days War (the Yom Kippur war was a few month away). At 13:54, the Libyan 727 entered airspace over the Sinai desert at 20,000 feet. A few minutes later two Israeli Air Force (IAF) F-4s Phanthom Kurnas (in Hebrew “Sledgehammer”) were scrambled to intercept the intruder. The direct evidence from the surviving co-pilot seems to confirm how the Israeli fighters followed the international rules on the intercepting of civil aerial intruders: the Israeli pilots, in fact, attempted many times to make visual contact with the airliner’s crew and tried to communicate with them by waving their hands, dipping the wings and finally by firing warning cannon shots close to the wingtips.

The 727’s crew, maybe because being under extreme pressure and space disorientation, did not give much importance to the fighters’ behavior and decided to turn back to the West. No worse decision could have been taken, since Israeli pilots interpreted this as an attempt to flee. Aiming directly at the airliner’s wingtips in order to damage but not destroy the plane, the couple of Phantoms fired short bursts with their 20mm cannon damaging the control surfaces, the wing structure and the hydraulic systems. The amount of damage suffered was instead higher than expected by the fighter pilots, and such to force the airliner to attempt an emergency landing in an area covered with sand dunes. During the emergency landing there was an explosion near the right main landing gear, causing the destruction of most of the airframe and the subsequent death of 108 people of the 113 on board. The surviving co-pilot, later stated that the entire crew knew the Israeli jets wanted to follow them but since relations between Israel and Libya were not very smooth, they decided to turn back despite the several warnings. From his words we can u 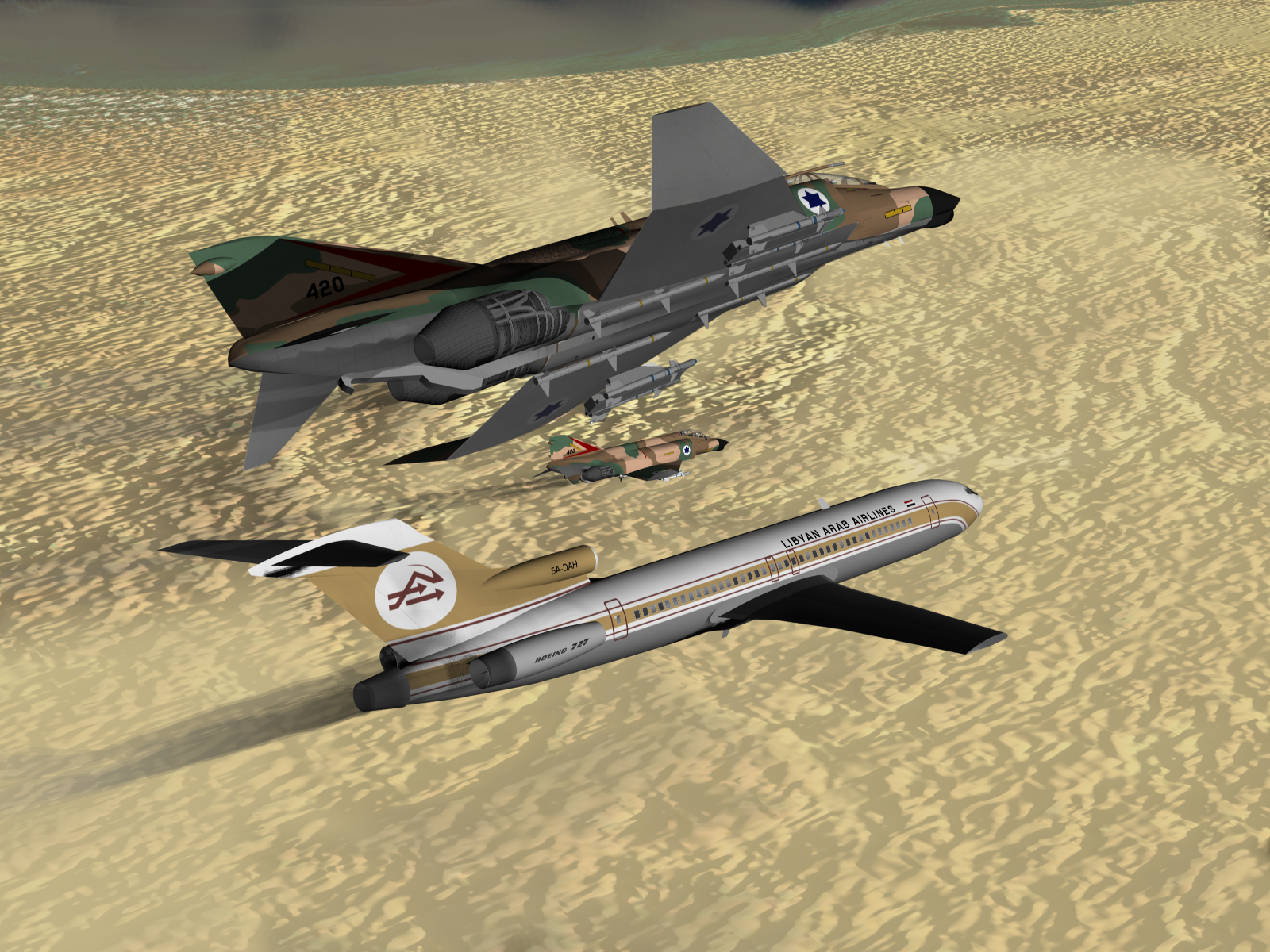 nderstand the situation: “When we spotted the fighters the Captain contacted Cairo approach frequency and communicated to have orientation troubles and of being intercepted by fighter jets. Then he lowered down the landing gear and slowed down the speed. At that time one of the jets put itself in front of us dipping its wings but we were so busy and concerned that our main and only goal was to reach Cairo airport. From now on it is very difficult to me to remember well since our right wing was in flames and we started our descend until crash down on a sandy terrain about 20 km east of Suez Channel”.
On the Extraordinary Session of ICAO held on Feb. 27, 1973, many Delegations fully condemned the Israeli action stating how Israel Government “had violated the fundamental legal norms and standards of international civil aviation which did not permit the use of armed force against a foreign civil aircraft clearly identified as such”.
But, on the other hand, Tel Aviv stated clearly how the fighters put every effort to minimize the use of force but the action had become necessary only because of the irresponsible behavior of the airliner crew: “…and for seven minutes (the Israeli fighters) flew around it, signalling to it in a clear and correct manner, with internationally agreed signs, to follow them so as to land…Since the Boeing aircraft did not comply with these instructions, suspicious grew concerning its mission. At this point, demonstratively and in full view of the crew, warning shots were fired…but the Libyan plane ignored them. The assumption therefore was that the plane had entered the area on a hostile mission…At this stage accordingly decided that the aircraft must be compelled to land by firing upon it…”.
The ICAO Assembly later with 105 favorable votes condemned Israel for such incident. Hereby the text of the Resolution:
“THE COUNCIL,
RECALLING that the United Nations Security Council in its Resolution 262 in 1969 condemned Israel for its premeditated action against Beirut Civil Airport which resulted in the destruction of thirteen commercial aircraft, and recalling that the Assembly of ICAO in its Resolution A19-1 condemned the Israeli action which resulted in the loss of 108 innocent lives and directed the Council to instruct the Secretary General to institute an investigation and report to the Council;
CONVINCED that such actions constitute a serious danger against the safety of international civil aviation;
RECOGNIZING that such attitude is a flagrant violation of the principles enshrined in the Chicago Convention;
HAVING CONSIDERED the report of the investigation team…and finding from it no justification for the shooting down of the Libyan civil aircraft;
1) STRONGLY CONDEMNS the Israeli action which resulted in the destruction of the Libyan civil aircraft and the loss of 108 innocent lives;
2) URGES Israel to comply with the aims and objectives of the Chicago Convention”.
During the course of this Session, many delegates called for a deep change of the rules on the intercepting of civil foreign aircraft in order to minimize the risk of being shot down but this proposal was not considered too much by the States.

The following F-4 profiles are a courtesy of Ugo Crisponi, AviationGraphic.com.

Another incident took place years later, with the loss of B747 Korean Airlines in 1983; this drew again the focus on changing the interception rules.