In the years of Cold War, the usual crossroads of the International spying was the Baltic Sea, a narrow part of sea overlooking the Soviet Union, DDR and Poland for Warsaw’s Pact side, West Germany, Denmark and Norway for the NATO side and some neutral countries like Finland and Sweden.

On 8 April 1950, a four engine US Navy Consolidated PB4Y-2 Privateer left Wiesbaden Air Base in West Germany at 10:31am LT for a surveillance flight aimed at spying the Soviet submarines operating in the Baltic Sea. The “Privateer”, a World War II era patrol bomber derived from the Consolidated B-24 Liberator, carried a crew of ten people when it was intercepted by four Soviet “La-11” fighters at about sixteen kilometers off the coast of Latvia, south of Liepäja.

After refusing the “follow me” signals from the fighters, the US Navy plane was immediately shot down and ten men of the crew was presumed dead and never found.

Search and rescue efforts started almost immediately after the plane was reported missing but were abandoned on 16 April, since no survivors or rests were found.

But a halo of mystery soon pervaded the days following the incident. On 15 April a search plane spotted an inflated life raft so that Capt. D. J. Klinger, commander of the U.S. Air Rescue Mission stated right away the rafts supply pockets had been opened manually. Days later two Swedish fishing boats recovered another damaged life raft and a nose wheel with a bullet hole.

Like the majority of biggest incidents (not only those involving planes), rumors and unbelievable stories started to spread out everywhere: a Soviet gulag survivor named John Noble, after coming back to the USA having experienced ten years of prison in various concentration camps, stated he had met two witnesses who claimed they had seen eight survivors of the “Privateer” crash.

Anatolij Gerassimov, one of the four pilots who had intercepted the US plane, several years after the incident, is believed to have reported to a Lithuanian newspaper a statement assuming that the crew had been taken prisoner.

He stated that after intercepting the “Privateer”, the formation composed by four Lavochkin 11 fighters ordered the US pilot to follow them. They used internationally recognized signals like rocking the wings and turning to the new heading in front and left of the US plane.

After that Gerassimov noticed the US pilot smiled at him, waved “good-bye” and turned to a western heading. Therefore the soviet pilots informed the ground control, which issued the “green light” to attack and shoot to kill.

After the attack, according to Gerassimov, the plane started to burn in the center and he saw ten parachutes coming out from the plane, then the “Privateer” exploded. 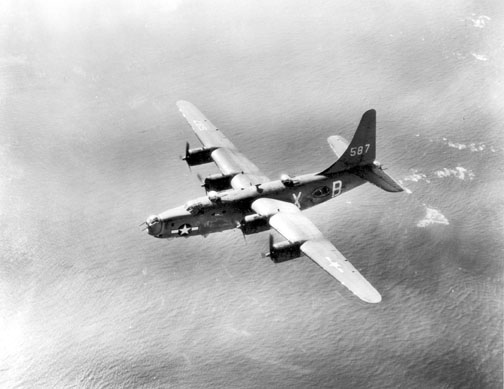 Regarding the rests of the plane, in 1993, retired Soviet General Fyodor Shinkarenko stated that he believed the wreckage was secretly salvaged and sent to Moscow.

Leaving aside the various beliefs about the fate of the crew, even this incident brought to two opposite theories by both the competitors.

In a note dated 18 April 1950, the US Government stated the full responsibility of the incident to be attributed to the Soviets and asked for the need to start immediately a deep investigation on the incident.

The results of the US investigation come to the conclusion that the crew followed the order to avoid flying any enemy territory and therefore the plane was on the airspace above the high sea at the time it was shot down.

The response by the Soviets was instantaneous: they maintained that at the time of the incident the US plane was armed, was flying 21 kilometers inside the Soviet airspace and was shot down only after refusing the request for an immediate landing at the nearest available airfield.

It is hilarious to note how the focal point of the legal and diplomatic debate after the incident was not focused at all on the legitimacy of the activities of flying spying.
Again the point of rupture between the competitors was the exact location of the intruder plane at the time of the facts. Indeed, if it could have been possible to demonstrate that the US plane was unquestionably inside the Soviet airspace, the use of force could have been regarded as legitimate (this only if the Soviet government could demonstrate that the enemy plane refused to land upon request).

Therefore, the activity of air surveillance and spying above the high sea could not have been blamed by anyone.

Apart the political and military security implications, this principle has been considered a milestone by most of the international law jurists on the matter.

In any case, the main doctrine recognizes that even in such events like the one analysed in this episode involving military aircraft, the use of force against the enemy intruder will result legitimate only if following some specific requisites.

Here I indicate three cases in which the intruder starts to perform high risk maneuvres after being intercepted:

* if the intercepted plane starts to fire against the defense fighters without any apparent explanations;
* after all the necessary warnings (request of landing, immediate change of course and so on) have been ignored voluntarily;
* when its purposes are clearly opposing the ones of the enemy.

This theory is followed by Browlie in the treaty “International Law and the Use of Force by States”, according to which the hostile action has to be related to the speed and course kept by the intruder aircraft on enemy territory:

“[…]in general the practice seems to be that there is no right to shoot down trespassers unless they refuse or appear to refuse to land. However, if the penetration is by unidentified fast aircraft which persist in a deliberate and deep penetration of airspace, it may be that, in view of the destructive power of even a single nuclear weapon carried by an aircraft, the territorial sovereign is justified in taking without any warning violent and immediate preventive measures.”

The use of force as legitimate defense has been used several times by the countries and has not been limited to aerial intrusions only.

As an example, after a long series of submarines incidents on its territorial waters, the Swedish government sets a trap by sealing off the marine area of Harsfjarden with mines and sensors.

A comparable event involved Italian Navy warships on the same year in the waters of the Gulf of Taranto.

The Lost Constellation (El Al Constellation vs. Bulgarian Mig-15s) On 27 July 1955 an El Al Lockheed L-049 Constellation (with registration 4X-AKC, similar to the example shown below) was flying the London – Tel Aviv […]

How the U.S. F-15s intercepted Russian Bear bombers in the GIUK Gap: tensions and hilarious moments above Iceland

The tight gap between Greenland Iceland and the UK (“GIUK Gap”) was once the main “highway” used by Soviet bombers and maritime reconnaissance aircraft flying to Cuba, monitoring NATO maritime activities or simply probing local […]