During my career as a journalist, I’ve had some chances to chase other aircraft and take interesting air-to-air pictures. It happened when I took the a/a pics of the F-104s, of the AMX, Tornado F.3, MB-339CD etc (if you browse through the posts and pages of this blog you can find many of those images and related stories). But, none of those sorties caused stir as the following two examples.
On May 16, 2002, a C-135E panicked the city of Sydney, Australia, overflying at low level the city center during an air-to-air photo session. The aircraft, using c/s “Agar 72”, performed a few orbits above the Opera House and Harbour Bridge escorted by a Royal Australian Air Force (RAAF) Hawk and many, watching the scene from the ground, thought that a remake of the 9/11 terrorist attack on NYC was in progress. Actually, both aircraft were involved in a promotional flight aimed to gather imagery of the C-135E, one of the most interesting and less known to the Australian aircraft of the USAF inventory. The presumed hijacked 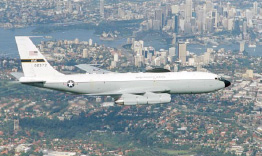 commercial wide body, serialled 60-0372, was one of the three flying for the Air Force Material Command (AFMC), headquartered in Wright Patterson AFB, Ohio, employed by the 452nd FLTS (Flight Test Squadron) of the 412th TW (Test Wing) based at Edwards AFB, California, the weapon systems’ testing and development unit of the USAF. The aircraft was previously a C-135N, converted to stydy the atmosphere within the ABL Airborne Laser program. During the various testing campaigns, whose aim was to evaluate the actual range of the laser at various altitudes, temperature, seasons and optical turbulences, the C-135E flew in simulated and realistic scenarios and the one that scared Sydney was probably returning to Edwards from a Forward Operating Base (maybe Osan airbase, Korea). Something similar happened on Apr. 27, 2009, when the Presidential Airlift Group conducted a photo mission above New York City involving the VC-25 and an F-16 between the 10.00L and 10.30L. The flight was coordinated by the Defense Department and the Federal Aviation Administration (FAA) and notifications were sent to the emergency centers, to the NY Police Deparment and to the New Jersey State Police (plus a few more operations centers in the area) but people didn’t expect to see a fighter escorting a wide-body (one of the two flying for the POTUS as the “Air Force One”) above Battery Park City and the Hudson River. The sight of the two aircraft frightened residents and workers in Manhattan who called 911 and other authorities asking for information. Some buildings even self evacuated.
Here’s a video of the photo session taking place over NYC (many more are available on Youtube):

As a consequence of the NYC photo shoot, President Obama ordered review of the NYC flyover, as explained in the following interesting Associated Press article (containing much details):

WASHINGTON — The White House plans an inquiry into a low-flying photo shoot
by a presidential plane that panicked New Yorkers and cost taxpayers
$328,835. President Barack Obama said Tuesday it won’t happen again.
But the origins of the government public relations stunt that went awry
remained an engrossing mystery — and a potential political problem for
Obama. The White House military office approved the photo-op, which cost
$35,000 in fuel alone for the plane and two jet fighter escorts.
“I think this is one of those rare cases where we can all agree it was a
mistake,” Pentagon spokesman Geoff Morrell said of Monday’s “unfortunate”
flight low over the Hudson River that for many on the ground evoked chilling
memories of Sept. 11, 2001’s attacks that brought down the World Trade
Center’s twin towers, just across the water from Monday’s flyover.
The sight of the huge passenger jet and an F-16 fighter plane whizzing past
the Statue of Liberty and the lower Manhattan financial district sent
panicked office workers streaming into the streets.
“It was a mistake, as was stated … and it will not happen again,” Obama
said.
White House officials did not say why new photos were needed of the plane
that is sometimes used as Air Force One — Obama was not aboard the flight —
or who the presumed audience of the planned photographs were.
Air Force officials began to provide basic information Tuesday about the
cost of the flights, but did not disclose how long the public has paid for
similar photo op flights.
And public officials from the White House to New York still had not
explained why they acceded to a plan that informed several dozen officials
about the impending flight but kept the public in the dark.
“I think we’ve all learned something from it, and now it’s time to make sure
our procedures are better and to get on with other things,” New York Mayor
Michael Bloomberg said. “It does seem like it was a waste of money, but
that’s up to the federal government.”
Air Force officials Tuesday said the fuel cost of the three-hour round trip
from Andrews Air Force Base in Maryland and back was $35,000 for the flight
of the Boeing VC-25 presidential jet and the two accompanying F-16 fighters
flown by D.C. Air National Guard pilots. The large jet, a Boeing 747,
carried only military personnel, the White House said.
The Air Force estimated the total costs for the flights to be $328,835,
including fuel used in air for the planes and on the ground for trucks and
support vehicles. The cost also includes the average price for parts that
need replaced, repaired or restocked after flights.
Air Force officials said the team would have spent that money regardless;
they said the photo op flight was run as a regular training mission, so that
the costs of the aircraft were considered training costs and were handled
under the operations and maintenance budget of the 89th Airlift Wing.
They said they reached that total based on an average of past costs when the
aircrafts were used.
White House press secretary Robert Gibbs said Tuesday that there would be an
inquiry into how the decision was made to make the flight. He made no move
to defend the midlevel White House civilian who had accepted blame for it on
Monday.
“The president will look at that review and take any appropriate steps after
that,” Gibbs said. The inquiry would be led by Deputy Chief of Staff Jim
Messina, Gibbs said.
White House officials said Obama was fuming mad and thinks Air Force One did
not need a new publicity photo anyway.
Defense Secretary Robert Gates “did not know in advance about this flying
photo op,” Morrell said. “Once he found out, suffice it to say he was
surprised and not very pleased.”
The presidential air fleet answers to the White House military office, whose
director, Louis Caldera, issued a mea culpa on Monday.
“While federal authorities took the proper steps to notify state and local
authorities in New York and New Jersey, it is clear that the mission created
confusion and disruption,” Caldera’s statement said. “I apologize and take
responsibility for any distress that flight caused.”
For a half-hour, the Boeing 747 and one of the F-16s circled the Statue of
Liberty and the financial district near the World Trade Center site. Offices
emptied. Dispatchers were inundated with calls. Witnesses thought the planes
were flying dangerously low.
A White House official has said the New York City mayor’s office and other
New York and New Jersey police agencies were told about the Boeing 747’s
flight. The official said the FAA, at the military’s request, told local
agencies that the information was classified and asked them not to publicize
it.
Bloomberg initially lambasted the government for failing to notify him, then
criticized one of his own aides after learning that the aide had not relayed
notification that the flight was coming.
New Jersey Gov. Jon Corzine said Tuesday he also received no warning ahead
of time that the backup Air Force One jet and military fighters would be
flying low around the Statute of Liberty.
Corzine said he had yet to find a New Jersey official who was told in
advance about the Monday morning fly-over.
The Democratic chairman of the Senate Armed Services Committee, Sen. Carl
Levin, said the Obama administration should have been more careful about
alerting New Yorkers to the photo op.
“There should have been better communication,” Levin said Tuesday. “They’ve
expressed their regrets for not having a better communications line to New
York, and I think New York people should have known about it.”