Des Barker recently sent me the above picture.

It depicts a Tornado, in a clean configuration, perfoming an aggressive left turn at ultra low level, most probably immediately after take-off.

If you look closely to the picture (whose author is unknown), you’ll notice the aircraft wears the typical sharkmouth of the 155° Gruppo of the 50° Stormo of the Aeronautica Militare (Italian Air Force, ItAF), based in Piacenza.

Look at the following image I took on Mar. 11 at Pratica di Mare, where a Tornado ECR is currently involved in a testing campaign with the ItAF Flight Test Center, the RSV (Reparto Sperimentale Volo). 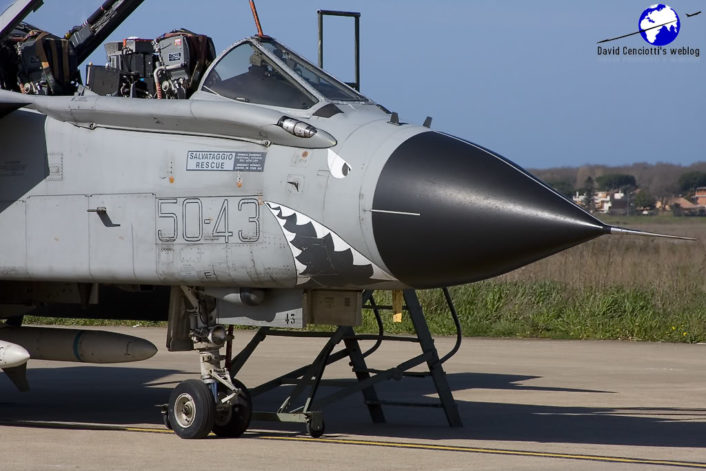 Therefore, the aircraft is Tornado ECR, completely clean and without the refueling probe.

That maneuver resembles the typical John Derry turn to the left performed at the beginning of each Tornado display by the 311° Gruppo Volo of the RSV.

On that day, Piacenza airbase was still closed (it reopened on Dec. 19) and the 155° was still operating from Cameri airbase (the deployment started at the beginning of Sept. 2008, even if the aircraft flew the first operative mission on Sept. 16, and ended on Feb 3, 2009, with a ceremony for the farewell to the Tonkas).

Here’s a video of the same takeoff.

Maybe the maneuver was performed at Cameri, perhaps by a test pilot of the RSV involved in some kind of testing activity, or simply by a pilot of the 50° Stormo during a test/acceptance sortie.

For sure, it is not a normal take off or flyby.

If you have more info or ideas, just let me know.

The airliner had lost contact with the Air Traffic Control, sparking the alert launch of two Eurofighters in QRA (Quick Reaction Alert). On Apr. 9, 2019, two Eurofighter Typhoon jets belonging to the 36° Stormo […]