When Giovanni Maduli sent me the pictures he took at Pratica di Mare on Feb 13 (that you can find here: http://cencio4.wordpress.com/2009/02/16/pratica-di-mare-130209/), he suggested me to look at the nose landing gear of the HH-3F.
Here’s the picture and a close up: 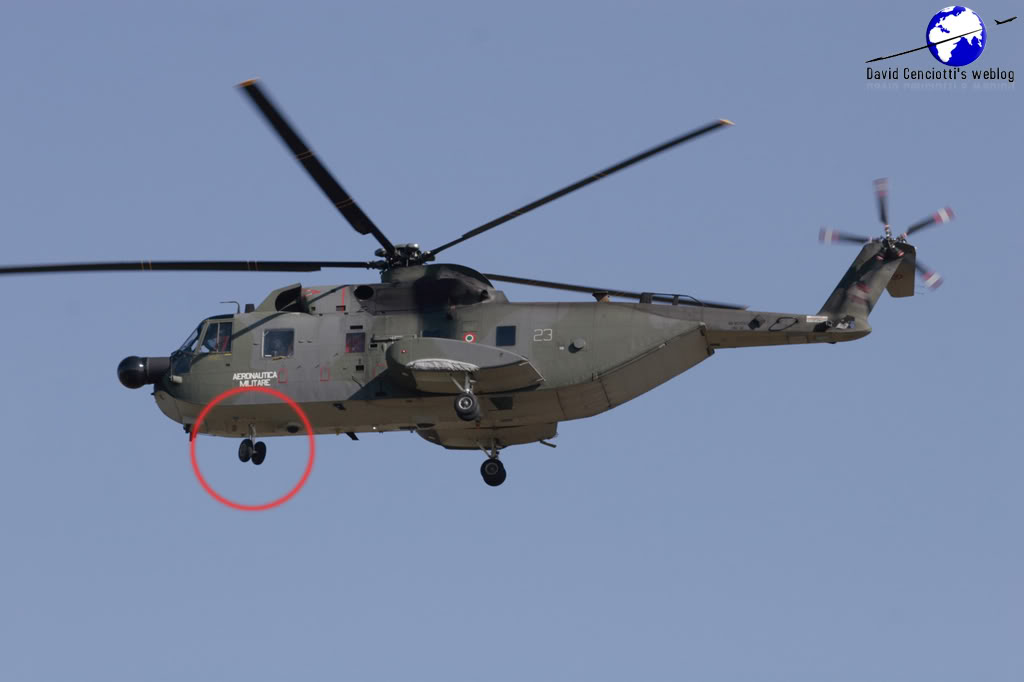 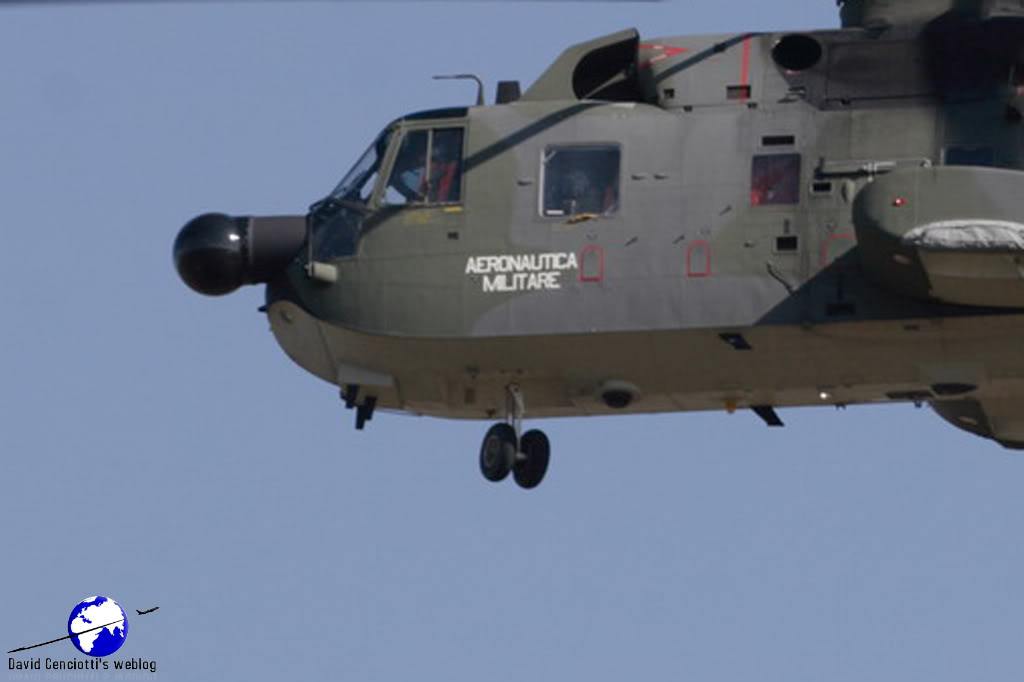 I don’t know how the HH-3F nose wheel steering (NWS) works, but in most aircraft it is engaged and disengaged using a switch/push-button. Military aircraft have that button on the control stick. The F-16 moves the nose wheel when on the ground using the rudder pedals (and the rudder moves accordingly too). Obviously, the rudder becomes effective only at a certain speed (I think around 70 Knots) so the only way to turn the nose while taxiing is by means of the NWS. Aircraft larger than a fighter (C-130s or B747s just to name but few), have a large tiller on the pilot’s left side to steer the nose landing gear beyond the small deflections provided by the rudder pedals. Since some aircraft use the same switch for multiple functions (steering on the ground, air-to-air refueling door when flying, etc), the aircraft itself base on the actual flight conditions the system that must be activated: for ex. WOW (Weight-On-Wheels), the switch activates the NWS, while, on the air, the switch opens/closes the refueling door.
For sure, when the aircraft is flying, the NWS is disengaged and when the landing gear is lowered, the nose wheel should be centered by the hydraulic pressure of the servo valve.
So, the picture of the HH-3F with the nose wheel in an unsual position made me think that this was a quite frequent emergency for the A-320/319 family. 10 years ago an America West A-320 (it was Feb. 16, 1999), with registration N628AW, flying as AWE 2811 suffered minor damages landing at Port Columbus International Airport (CMH), Columbus, Ohio, with the nose wheels rotated 90 degrees. When the flight crew lowered the landing gear it received a (Landing Gear Control and Interface Unit) fault that after a visual fly-by resulted in nose wheels rotated 90 degrees from the straight direction foreseen for landing. The pilot performed a normal touchdown which was followed by an emergency evacuation from the overwing exits. Nobody of the 31 POB (People On Board) was injured. The NTSB investigation revealed that “the external ‘O’ rings in the steering control valve had extruded and by-passed pressurized hydraulic fluid to rotate the nose wheels. This event had occurred before, and the manufacturer had issued a service bulletin. The operator had not complied with the service bulletin, nor were they required to comply with it.”
In November 2002, both a JetBlue A320 (reg. N503JB) and a United A-319 (N804UA) were compelled to land with the nose wheel perpendicular to the runway and in 2005 many will remember the images (http://www.airliners.net/photo/JetBlue-Airways/Airbus-A320-232/0926274/L/) of the JetBlue A320 (flight 292) performing an emergency landing at Los Angeles International with the nose wheel 90° to the runway.

A series of tactical events were carried out at Pratica di Mare airbase to show the ability of the Italian military assets to be used for both military and civilian operations. “Dual use” is a […]