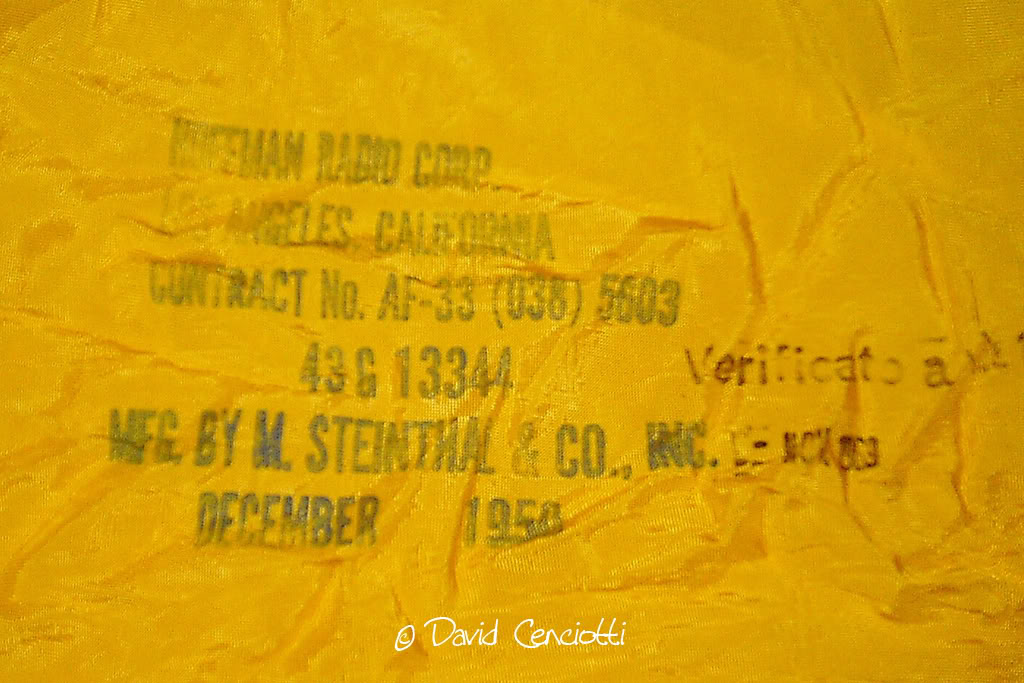 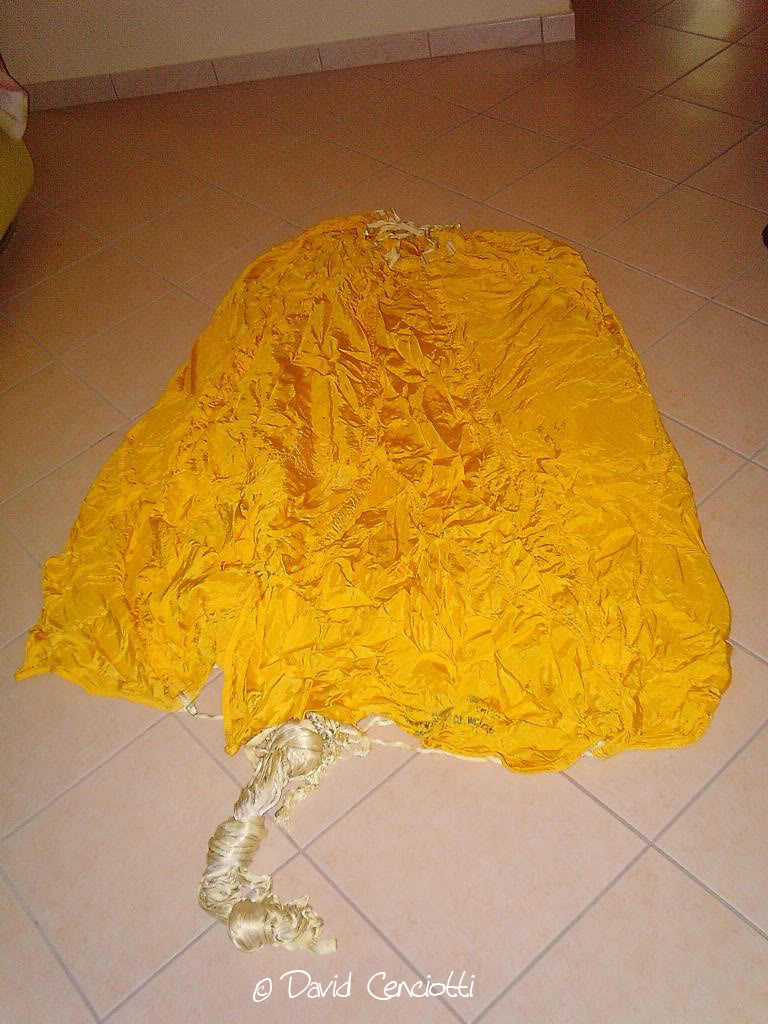 The chute diameter is 12 ft so it is larger than a pilot chute and smaller than a drag chute. The pilot chute is the little parachute that helps the drag chute to deploy. In the following sequence it is the smaller one, white colour. 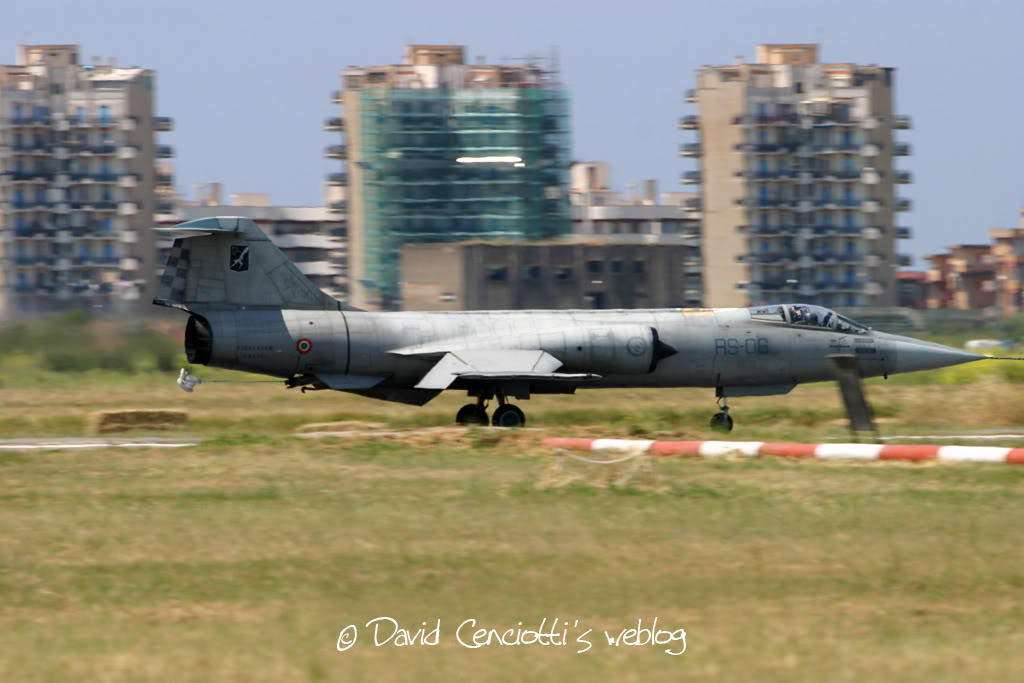 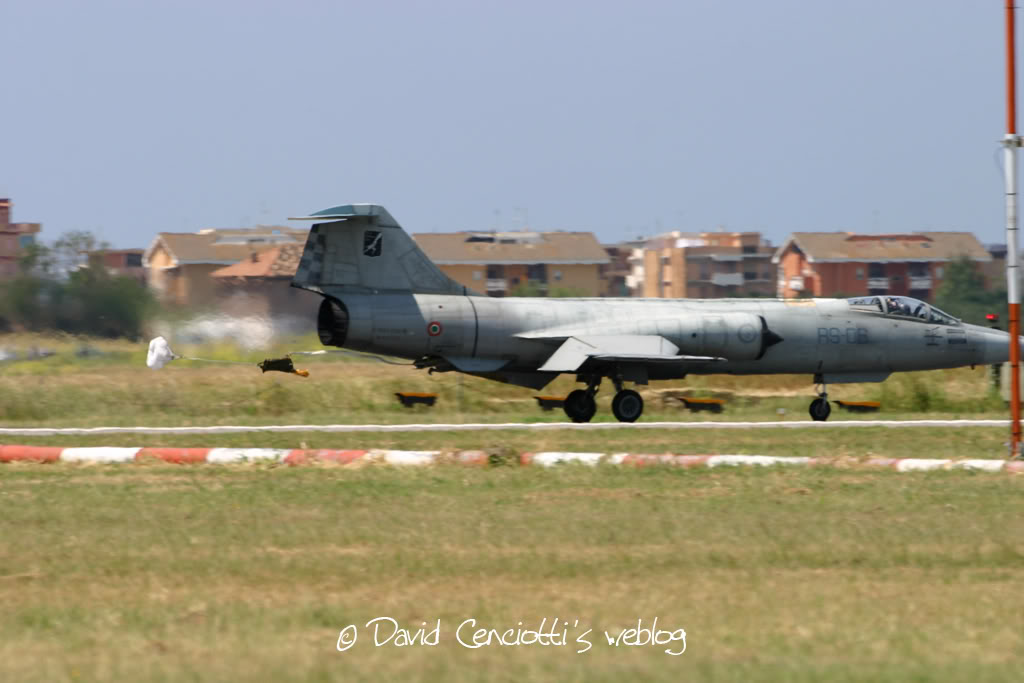 The pilot chute it’s extremely important for the deployment: the F-104 landed very fast and without drag chute it need the safeland barrier or the arrestor gear to prevent overrun. The following pictures show the last XX Gruppo TF-104 special colour landing at Pratica di Mare during the F-104 reunion on May 30th 2004 without the drag chute (pictures by Giovanni Maduli). 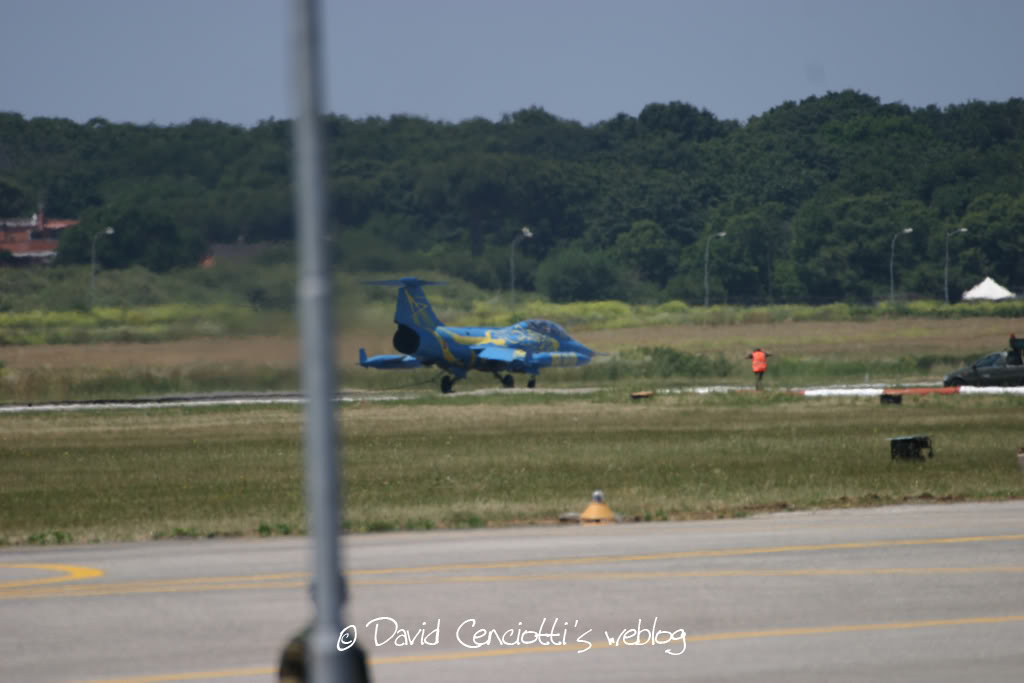 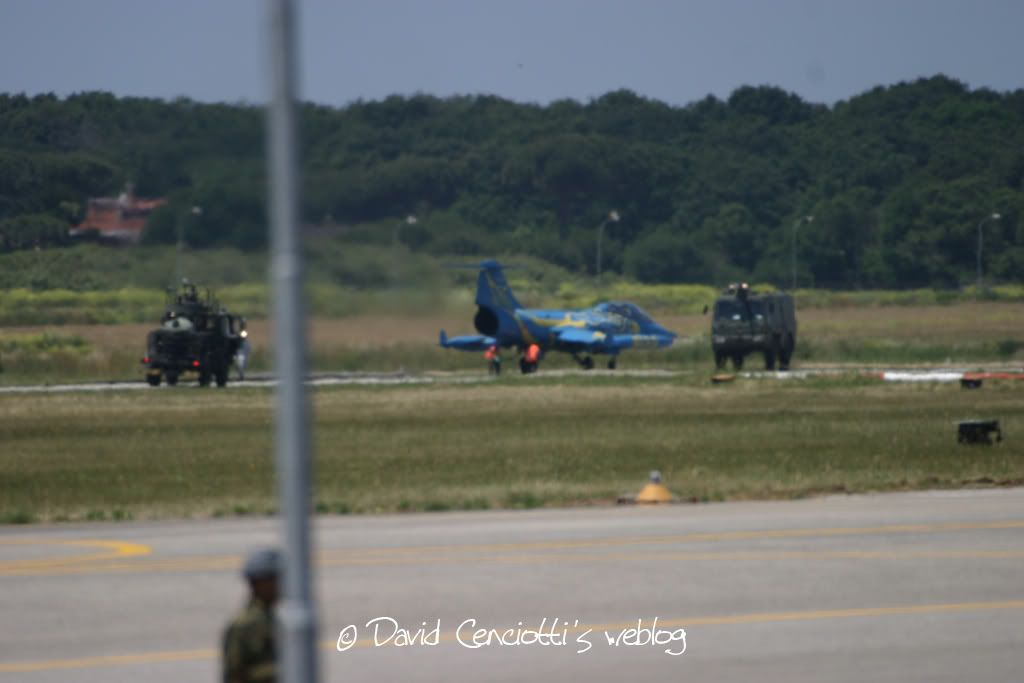 In 1950, the F-104 was a project, so the chute was most probably used with another purpose and on another kind of aircraft (since ’50s aircraft use canopies with segmented panels not a solid one). I’m pretty sure it is not a drag chute simply because it is a solid canopy and not a slotted type with the characteristic segmented panels. Just look at the following pictures (some of which ItAF courtesy) to see how a Starfighter drag chute looked like. 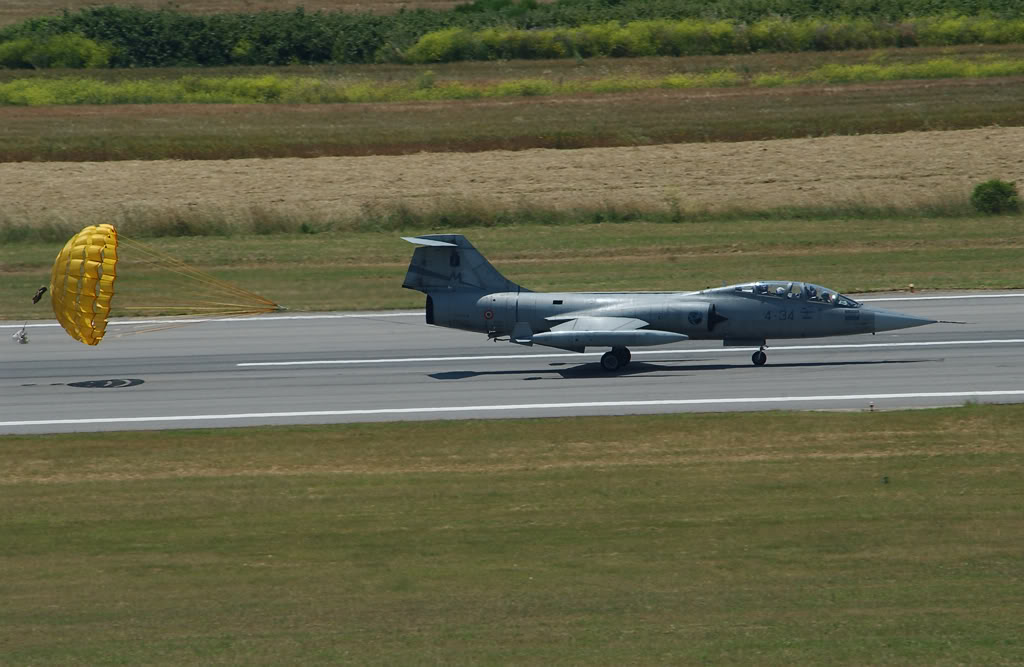 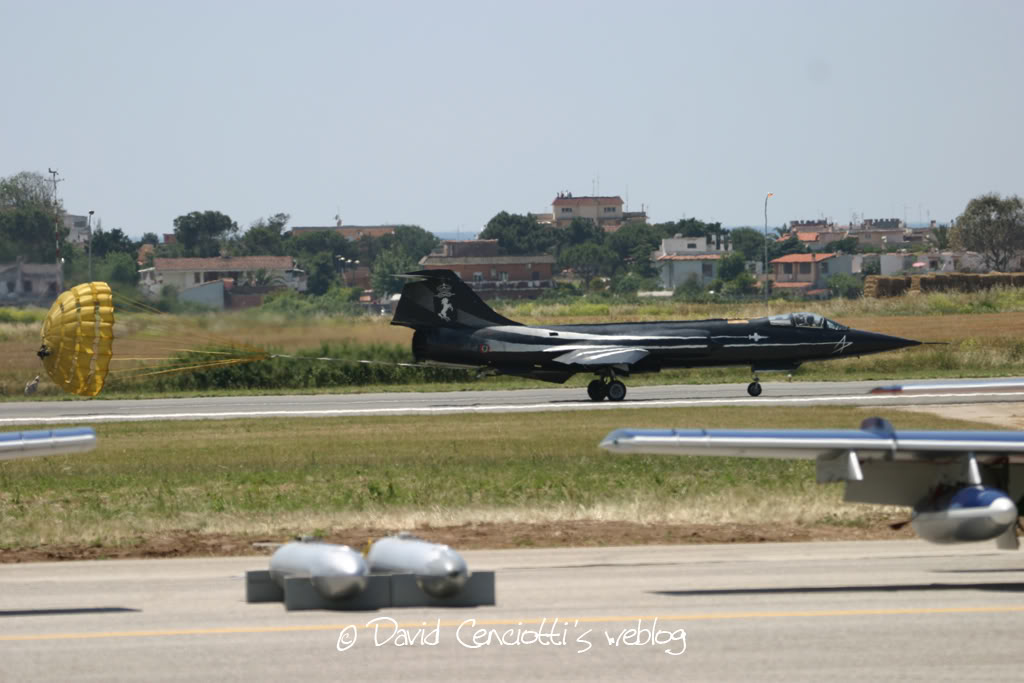 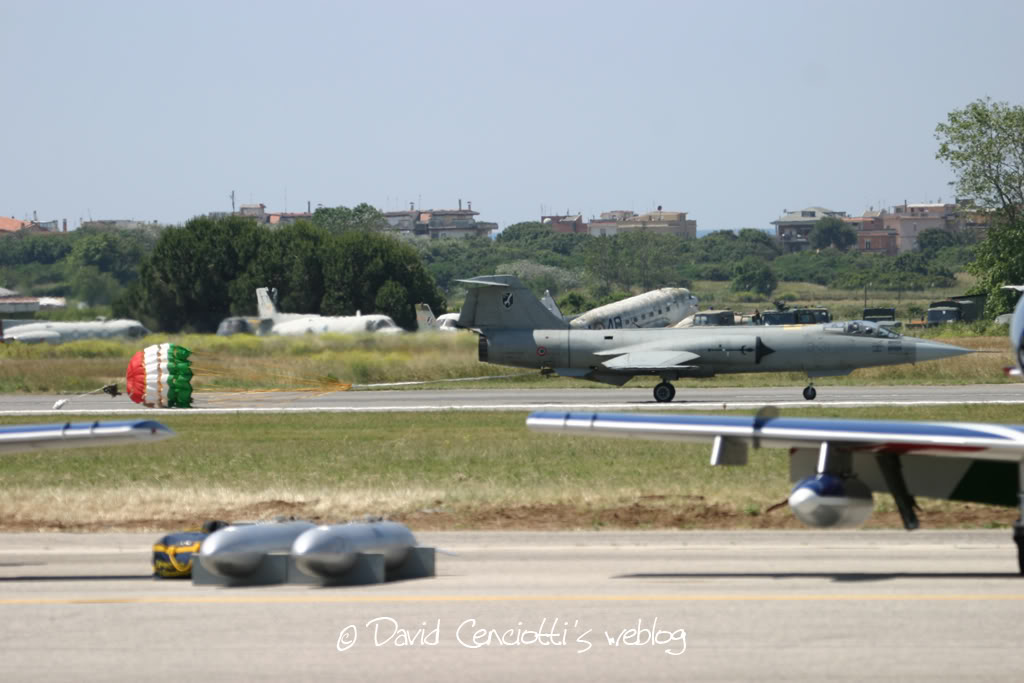 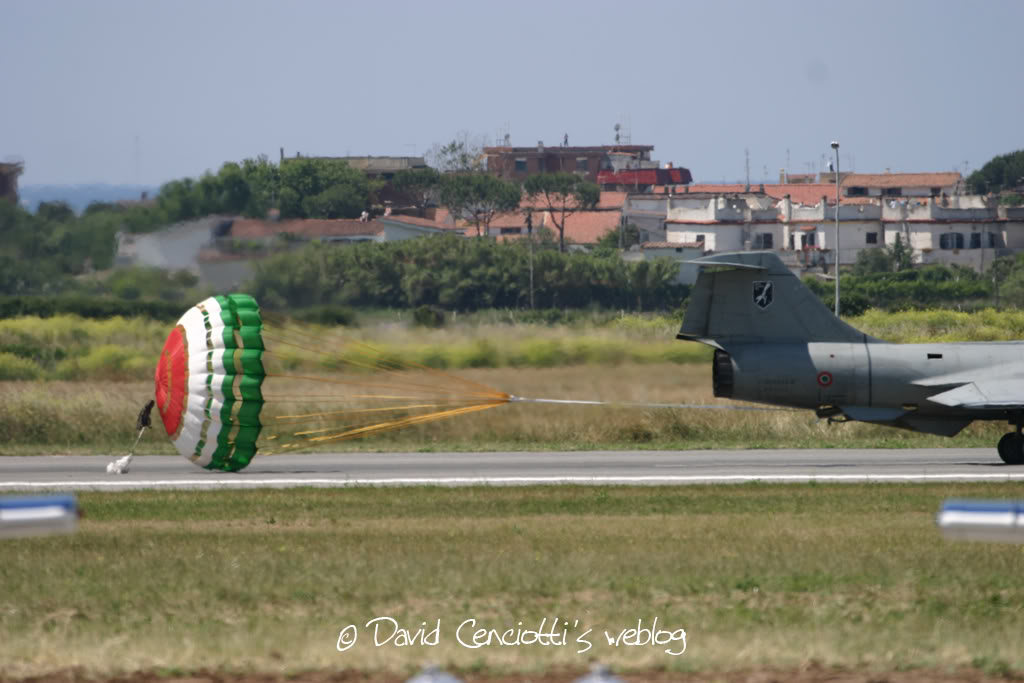 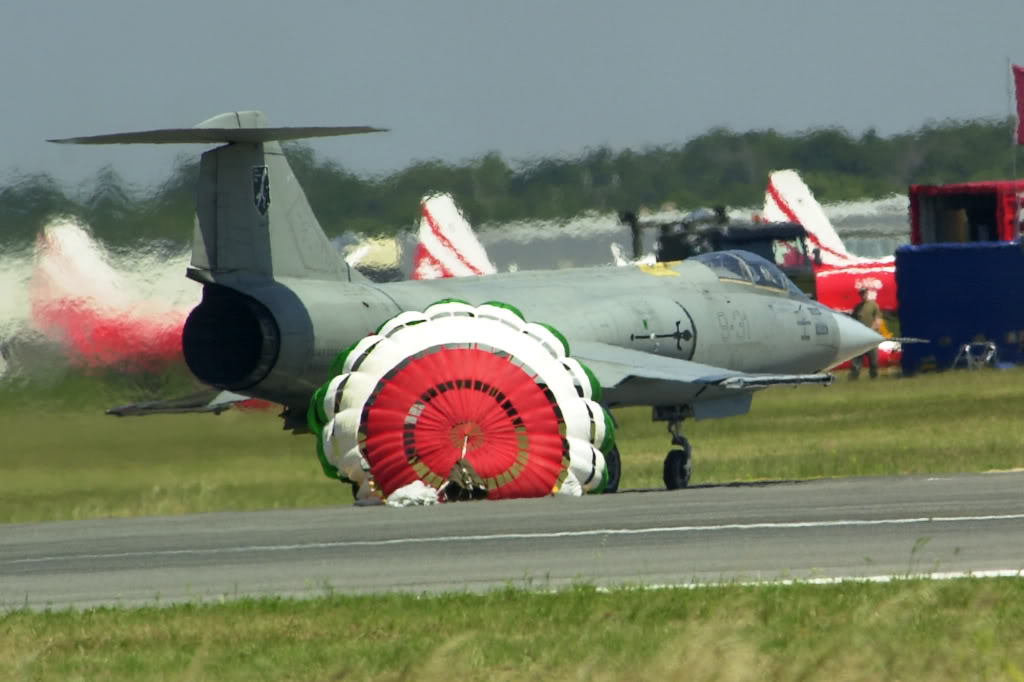 The seller explained that her uncle, a former F-104 pilot, gave it to her and she had twice of them (I also saw a picture of the other one that was identical to the one I purchased) and for a short time I thought it could also be the pilot’s own parachute, the one used with the C-2 ejection seat, even if the previous and current C-9 canopies are white, green, orange, larger and most probably thinner than the Hoffman one.
I’ve tried to find on the internet some info about Contract No AF-33 ( 038 ) 5603 but haven’t found any detail. Furthermore, I think that 43G13344 could be either a P/N or a model type. I’ve tried also to look for HOFFMAN Radio Corp, and I found this company produced radios and many other interesting things, some of which in the military field.
At least in 1969 my drag chute was verified by someone in Italy meaning that it was still in use (even if there’s no way to know if it was in the Italian Air Force, Army or Navy). The strange thing is that the “owner” is the HOFFMAN Radio Corp. but there’s also a possibility that it was used as a recovery chute for an air- or rocket-launched radio equipment or special weapon.
Interestingly, I’ve discovered that the Hoffman Radio Corp. produced the TACAN used on the F-104 (at least on the American ones) and maybe some UHF radios. However I think this doesn’t mean that the parachute is surely somehow linked to the Starfighter.
By searching for more infos on the Internet I found some interesting things dealing with Hoffman Radio Co. The first is that the Hoffman was awarded a contract by the US Navy to design and build sonobuoys and accompanying aircraft radio equipment. This is an excerpt from the R. I. ‘Scibor-Marchocki’ website (http://www.rism.com/atribute.htm) that has plenty of information on the Hoffman sonobuoys: “In the mid-1950’s, I was an in-house consultant and technical supervisor of the Hoffman Laboratories. In that capacity, I had designed the Sonobuoy that we manufactured for the U. S. Navy. What is a Sonobuoy? A Sonobuoy is a cylindrical device, which was deployed dropped) from a low-flying airplane. The buoy portion, which contained a two-way radio and antenna, would float vertically on the surface of the ocean. Depending upon the model, either mounted directly on the bottom of the buoy or hung at the end of a cable, there was a hydrophone (the sono portion, from the word “sonic”), a piezo-electric transducer which either passively or actively would listen acoustically for submarines. By placing several (at least three, usually five or six) Sonobuoys in a specific pattern, one could triangulate the position of the submarine. The two-way radio communication between the airplanes that deployed and then controlled and listened to the Sonobuoys employed “frequency hopping””.
Between 1957 and 1979 the ItAF was equipped with the Grumman S-2 Tracker an antisom aircraft and it is possible that they were equipped with the Hoffman sonobuoys. Therefore, it is also possible that the Hoffman chute was used to drop them in the water.
The unexplained would be: why an F-104 pilot got it and why did he tell his relatives that it was a Starfighter drag chute?

Some members of the Starfighter yahoo mailing list tried to find out what the parachute could be used for. According to a former RCAF military my parachute could be a deployment chute for a Gibson Girl radio. As Gary Watson explained: “the Gibson Girl was an emergency radio, approximately 24″ x 24″, with a long wire antenna that was carried aloft by a kite. A large crank was attached to the unit and you held the radio between your legs and spun the crank to generate enough electricity to send out an SOS on 500KHZ which was the original marine distress frequency. I only saw them once back in the mid 60s when they were being phased out of our C47s and Bristol Freighters in Marville. They would give you one hell of a jolt if you were touching the antenna output and the other A-holes in the shop were spinning the crank (personal experience as the receiver). They were also used quite a bit in Europe during WWII being dropped to resistance groups in the Netherlands, France etc”.

If you have any information or idea about this misterious drag chute, contact me or leave a comment.

Currently deployed to Decimomannu are the MB.339CDs belonging to the 212° Gruppo of the 61° Stormo of the Aeronautica Militare (Italian Air Force, ItAF). Giovanni Maduli went there and took the following pictures of the […]

Tales From The Cockpit: First Flight In A Eurofighter Typhoon Prototype