The 388th Fighter Wing at Hill AFB, the US Air Force’s first combat coded F-35 unit, deployed again its F-35As just two weeks after the end of the first combat deployment. The 34th Fighter Squadron “Rude Rams” moved last week to Al Dhafra Air Base, in the United Arab Emirates, to support the Central Command (CENTCOM) mission in the Middle East. The deployed group is made up of active duty pilots from the 34th FS and Reserve pilots from the 466th FS of the 419th FW (based at Hill AFB), as well as a mix of active duty and reserve personnel for maintenance and other support roles.

“I’m extremely proud of all of our Airmen in the 388th and 419th fighter wings,” said Col. Steven Behmer, 388th Fighter Wing commander. “Both they and this platform are absolutely ready for this short-notice tasking, bringing the unique combat capabilities of the F-35A to the fight.”

The first combat deployment of the US Air Force’s F-35A ended just two weeks ago, when the 4th FS “Fighting Fuujins” returned to Hill AFB after a 6-month deployment to Al Dhafra. The same active duty and reserve personnel mix was employed also for this first deployment, as the 466th FS joined the 4th FS overseas. During the deployment the F-35s performed both training and combat operations, including the first air strike mission, demonstrating the maturity and flexibility of employment of the asset, in spite of the continuous critics against the Joint Strike Fighter program.

“We showed that we deserved a seat at the table just like any other fighter,” said Lt. Col. Joshua Arki, 4th Fighter Squadron commander. “We demonstrated to our friends and enemies that the F-35A is ready for any of the missions we may be called upon. We can hold any conflict in any theater at bay.”

2019 surely has been a busy year for Hill AFB, as they faced multiple deployments in Europe and the Middle East, both for training and operational missions. Let’s do a quick recap of what they’ve been up to.

In January the 388th and 419th Fighter Wings participated in Red Flag 19-1 at Nellis Air Force Base, Nevada, in what is known as the Air Force’s premier combat training exercise. The wings deployed first assignment F-35 pilots (pilots that were selected for F-35 training straight up after they completed Undergraduate Pilot Training and obtained their military pilot’s wings) just one month after they graduated from the F-35 Basic Course, also known as B-Course, and put them alongside more experienced wingmen to gain valuable experience.

In May, the 421st FS, supported by the 466th FS, deployed to Aviano AB (Italy) first and to Spangdahlem AB (Germany) later as part of a two-months Theater Security Package, during which they worked with 19 different countries and took part to multiple exercises. One of the main exercises was Astral Knight 2019, a large European air and missile defense exercise focused on defending key areas from cruise missiles and air strikes, where the F-35s worked closely with Italy, Croatia and Slovenia and flew alongside F-16 Fighting Falcons, KC-135 Stratotankers, E-3 Sentry AWACS, B-52 Stratofortresses, Eurofighter Typhoons and MiG-21s.

In that occasion, the US Air Force said in a release that, according to strategists, integration was a key theme during Astral Knight and it will be essential in any future war, and the F-35 has been designed with that in mind.

Back at home, during the TSP, the 34th FS moved to Mountain Home AFB for a couple of months while the runway at Hill AFB underwent and extensive construction and repair effort. As a consequence, nearly 70 aircraft from three squadrons were operating away from home across three continents and the wing was successful in supporting all of those deployments. “It was a team effort, and I’m proud of our folks,” said Col. Behmer during the summer. “We’re focused on maintaining and improving every aspect of readiness – training, manning, and developing our people and tactics to meet current threats. Our maintainers are doing a great job providing the sorties we need to do just that.”

The maintainers’ job was greatly assisted by the ALIS, or Autonomic Logistics Information System, which includes a prognostic health management system that, using also joint technical data, can detect problems before they occur and allow maintainers to prioritize task, performing what is commonly known as preventive maintenance. 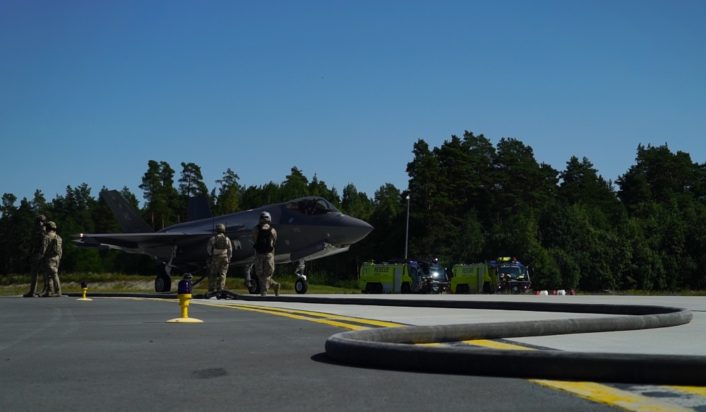 The busy year of Hill AFB can be considered a reflection of the Air Force’s most recent goals. At the end of 2018, former Defense Secretary James Mattis requested Air Force and Navy fighter squadrons to achieve a mission capable rate of 80 percent, even if MC rates are only one of the components that determine readiness, as stated by the Air Force Chief of Staff Gen. David Goldfein: “MC rates are important, but don’t represent a complete measure of overall readiness. You’ve got to have trained and ready airmen to get the job done. What really matters is that I’ve got trained and ready crews…and we’ve been able to meet those timelines and actually exceed them. That’s what counts.”

Another goal for the Air Force was presented by Gen. Goldfein during the AFA’s ASC 2018 Conference: “The next phase of work is preparing the Air Force we need for multi-domain operations—the convergence of military capabilities in any or all domains to achieve military objectives on a global scale. It is time to get back to our expeditionary roots.” This mean that the future Air Force needs to be able to operate during possible conflict scenarios in absence of fixed bases, infrastructure and C2 (Command and Control), with squadrons taking the lead and deploying with their entire organization and support elements to perform expeditionary operations at a foreign base. This capability was experimented during Operation Rapid Forge and Exercise Agile Lightning.

Operation Rapid Forge was held in July with F-35s landing at remote airports in Europe where they were met by a MC-130J, refueled, rearmed and launched again, thanks to the help of BOLT Airmen. Blended Operational Lightning Technicians are Airmen cross-trained in several aspects of F-35A maintenance that, according to the Air Force, allow for a 65% reduction in manpower during remote operations.

Exercise Agile Lightning demonstrated adaptive basing concept following the 2018 National Defense Strategy’s call to be strategically predictable but operationally unpredictable. During the exercise the 4th FS deployed a small detachment from Al Dhafra to a forward location, where they conducted operations for a given timeframe and then returned to Al Dhafra.

The Air Force is envisioning a force able to deploy anywhere and anytime to perform combat operations when needed and the F-35A is the pivotal element of this concept. Thus far the results seem to be very good and the aircraft performed as expected, with lessons learned that will surely be extended to other air assets, both current and future, and eventually to the air branches of the other military services.

About Stefano D'Urso
FacebookTwitterinstagram
Stefano D'Urso is a freelance journalist and contributor to TheAviationist based in Lecce, Italy. A graduate in Industral Engineering he's also studying to achieve a Master Degree in Aerospace Engineering. Electronic Warfare, Loitering Munitions and OSINT techniques applied to the world of military operations and current conflicts are among his areas of expertise.

While its aircraft can be tracked online, the U.S. Air Force only worries about Tweets….